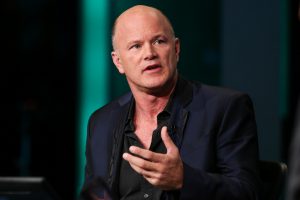 The current macroeconomic is one of pain across all markets. The sudden drop in demand for goods and services was evident in the oil market crash of 20 April 2020. Micheal Novogratz, the founder of Galaxy Digital and a former hedge fund manager noted in a recent CNBC fast money update on the oil crash that,

‘I think a lot of pain was retail, not professional’

Novogratz, like many other crypto investors, argues that it is Bitcoins’ moment to shine right now. The principle narrative of Bitcoin on which it was primarily built is coming to frustration on a macro-scale. The Federal Reserve provided over $6 trillion dollars in ‘Quantitative Easing’ stimulus last month and is close to adding another $484 billion to it.

Novogratz argues against the ‘money growing on trees’ portrayal.  He added,

As we have more and more fiscal stimulus being monetized by the central bank. More and more people I talk to wanna find something with scarcity. There are only 21 million Bitcoins ever gonna be mined, 87% have already been mined, next month inflation rate gets cut in half. So there is a really good story.

Moreover, he also noted that while adoption has been a big roadblock, investors are now beginning to turn towards it. The combined effect of the current macro outlook along with increasing adoption will be positive for BTC in the long run.

This has been the ‘Bitcoin story,’ and have been popularized by its people in the industry for a long-time. Nevertheless, Peter Brandt, a veteran trader and chart analyst still holds his doubts, he tweeted,

Seriously. I believe in the BTC story.

But, I really question the story because so many are totally convinced in the rightness of this idea.

Hence, Brandt is likely observing the markets for its consequences rather than believing in how Bitcoin can be. Despite everything supporting the Bitcoin cause, the story is still in its early stages, and the uncertainty of the current economic environment could turn out to be otherwise.

Are you willing to invest in the ‘Bitcoin story’? Please share your views with us.