Is China In Process Of Creating A Specialized Blockchain Fund?

Is China In Process Of Creating A Specialized Blockchain Fund? 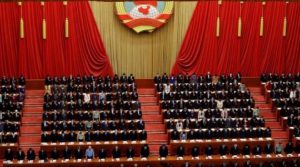 A proposal for the creation of a specialized blockchain fund has been forwarded by Jieqing Tan to the National People’s Congress (NPC) of China. The NPC is the strongest legislative body in the country and should the proposal be accepted, it will spell good news to the blockchain industry in the country.

It should be noted that China is pro-blockchain, leading in research and development around blockchain-related patents throbbing ahead of the United States, and its leader Xi Jinping has stated his support for Distributed Ledger Technology (DLT) previously stating in a speech that the country ought to grab the opportunities present by incorporating emerging technologies including Artificial Intelligence in their core sectors.

As reported by Beijing News, the proposal was first made when the over 3,000 members of the body gathered for the annual event dubbed the Langhui meetings. During this high profile meeting, delegates from around the country meet to submit several legislative proposal.

Tan took this opportunity and proposed the creation of a blockchain fund as he sought to use legislation to foster the expansion of DLT and blockchain in the country.

Specifically, the objective of the fund will be to support innovation around blockchain as it is his belief that the technology can drastically modernize the country’s governance processes.

Eventual modernization will speed up the shift to a more trustless system with smart governance running supreme. The details presented by his proposal will therefore define a path towards the end goals.

“From the bottom technology standard, middle industry application development to the top-level system design, the national blockchain technology industry and supervision [of the] three-dimensional strategic planning system should be well coordinated.”

The Blockchain-Based Service Network is Live

The aim of this network is to lay down the foundation of a future where the roots of the technology are technically “buried” just like the TCP and IP systems that underpin the modern-day internet are.

The BSN will therefore be the baseline where blockchain will be easily deployed by businesses and will in a way reflect on China’s global ambitions and the eventual implementation of Xi Jinping’s declaration of a blockchain revolution.