Is Bitcoin Loophole a Scam? Yes. A 100% Legitimate Review

I was preparing a news article for Coinfomania when a friend who I had earlier told about Bitcoin called my attention to what he perceived as a Bitcoin investment opportunity. Is Bitcoin Loophole a Scam?

Since this was not the first time I’m covering a report about scams like Bitcoin Loophole where fraudsters use popular celebrities as the face of their schemes, I almost ignored the site. But I was disappointed with what I learned next.

First, I did a Google search for “Bitcoin Loophole Scam” and realized that the first two pages were high domain authority pages containing fake reviews saying that Bitcoin Loophole is not a scam. 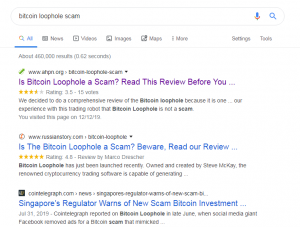 These fake information couple with the earlier news article which also featured a Facebook ad was what prompted me to create this article to answer any investor who is wondering:

Is Bitcoin Loophole a Scam?

The most straightforward answer is YES. Bitcoin Loophole is 100% Scam

First: The persons behind Bitcoin Loophole is using two or more website addresses

The Monetary Authority of Singapore has already issued an official warning in July alerting investors to the fraudulent nature of these websites and its attempt to defraud investors. The regulator then stated that the persons behind the site were using a similar approach to the one mentioned earlier, a popular figure Emeritus Senior Minister Goh Chok Tong.

There are almost no ways to offer guarantee returns on cryptocurrencies given their inherently volatile nature. But the Bitcoin Loophole scam is promising to consistent pay investors $13,000 every 24 hours if they’re able to make a one-off deposit of just $250 to get access to the software.

The fraudulent nature is however exposed by the fact that users have to deposit to a trading account on the website before any trade starts. There is a fake promise that withdrawal can be made after 24 hours, but that is definitely not going to happen.

To show that Bitcoin Loophole is a scam, the masterminds use the same tactic that characterizes fraudulent scheme through the years – instilling urgency.

First, the homepage website mentions that only 5 tickets are available. Also, upon submitting their email and name (optional), users are shown a video highlighting that the returns are just a few clicks away if they’re able to take action.

But even that too is a scam, since it is a common way of getting naive investors to put money into fake schemes like Bitcoin Loophole.

No Effort Required for a Luxurious Lifestyle

Is Bitcoin Loophole a Scam? Yes. A message on the website reads:

“Each month members of this exclusive group are living it up in exotic locations in every corner of the globe. With no more than a few clicks a day, these individuals are fulfilling their dreams.”

The introductory page also alleges that member has to work only 20 minutes per day to achieve the insane returns.

Clearly, these are statements to get investor hopes up. But even that too is a trick you must not yield to.

Once again we ask, Is Bitcoin Loophole a Scam? Yes. Do not attempt to put money into the scheme or you’ll eventually end up regretting it. All the red flags are clear to see.

You can start learning the real facts about Bitcoin and cryptocurrencies by exploring the educational guides on our website.