“I Hold About 2% Of Total Assets In BTC”, Paul Tudor Jones Discloses his Bitcoin [BTC] Holdings 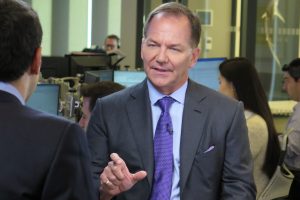 The story of one of the legendary hedge fund managers in the U.S sets up a bullish narrative for BTC as “once upon a time critic”, Tudor Jones, claims he now owns BTC – a huge amount of it. In an interview with CNBC on May 11, 2020, Tudor claims he holds 1% to 2% of his total asset holdings in BTC. Forbes ranked the hedge fund manager as the 343rd richest person in the world with a total net worth of $5.3 billion USD.

“Well, #COVID19 happened. And the great monetary inflation happened,” says Paul Tudor Jones on why he now believes in #bitcoin. He says he has just over 1% of his assets in #btc. “We’re watching the birthing of a store of value.” pic.twitter.com/Hm8hWyqX1U

The 66-year old investor states that the current global governments’ response to the COVID-19 pandemic is the key factor in changing his mind into investing into BTC. His entry into BTC presents a bullish stance for BTC heading into the third halving event whereby the supply of BTC will reduce from 1800 BTC to 900 BTC mined a day.

The founder of Tudor Investment Corporation also recently said the fund, which manages about $7 billion in assets, will be investeing about 1% of their pool into the top cryptocurrency.

In these times of heavy economic unsoundness, Tudor believes BTC offers a great store of value given it satisfies the four criteria set namely: purchasing power, portability, trustworthiness, and liquidity. He said,

“When it comes to trustworthiness, Bitcoin is 11 years old there’s very little trust in it. We are watching the birth of a store of value. But whether that succeeds only time will tell.”

With BTC’s survival every day, and the yearly inflation of the dollar by the Federal Reserve, Tudor believes the trust on the cryptocurrency will continue going up, further cementing its position as a store of value.

However, BTC’s recent price movements still give off a very volatile path for the growth of the cryptocurrency. For instance, over the weekend, the coin crashed over 14% in 10 minutes bouncing off near-$10,000 highs to $8,100 before retracing to current $9,100 levels on major exchange charts.

Tudor claims BTC remains a ‘greatly speculative asset’ hence his low preference in his portfolio of assets. He said,

“Bitcoin is a great speculation. I have just over 1% of my assets in Bitcoin. Maybe it’s almost 2 [percent].”