Gods Unchained is an Ethereum blockchain-based card game and competitor to Hearthstone that rose to prominence after a recent PR stunt. The game has skyrocketed in popularity in the past few weeks and is already breaking records.

Gods Unchained capitalized on this by offering to reimburse Blitzchung the lost winnings and offered to allow him to compete in the upcoming Gods Unchained tournament. Following this, a burst of interest helped Gods Unchained sell out its genesis card allocation — which is, in turn, helping Ethereum break new records. According to cryptocurrency analytics platform CoinMetrics, the number of Ethereum ERC-721 (NFT) transactions has skyrocketed in the past week and recently hit more than 3.7 million ERC-721 transfers in a single day. As it turns out, this number is more than quadruple the previous all-time high of 846,000 transfers which was hit earlier in November — all thanks to Gods Unchained’s genesis card activation. 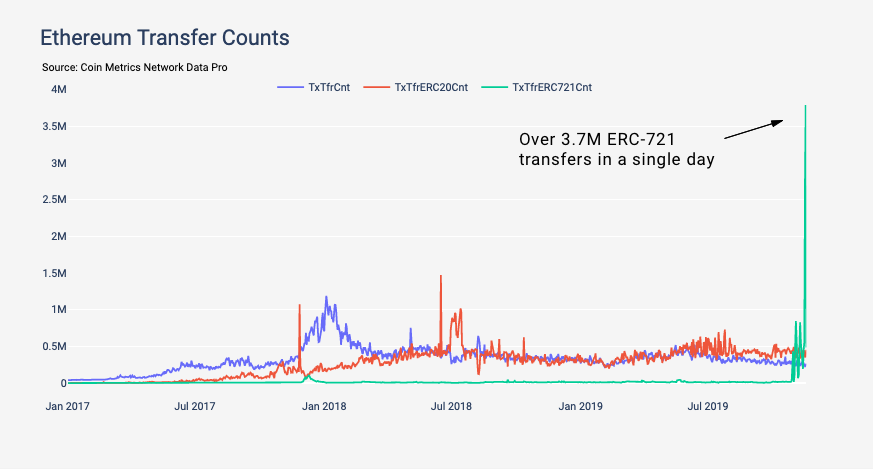 This isn’t the only record Gods Unchained has managed to break, either. Just a week ago, Gods Unchained helped set the record for the number of daily contract calls. jumping by more than 30% in the space of a single week following its launch.

Gods Unchained has also secured the record for the most tokenized assets minted by a single gaming dApp, with more than six million tokenized assets created to date, which easily eclipses the 4.7 million created by its nearest competitor, Cryptokitties.

Despite the huge success of Gods Unchained, the Ethereum network has remained remarkably stable throughout its launch. In fact, the network has been operating at under 85% of its maximum capacity since October, with Gods Unchained having little effect on the total congestion of the network. Because of this, you might be tempted to suspect that the Ethereum network scales better than it once did, and is hence capable of handling more transactions per second. However, although Ethereum is slightly more efficient nowadays, this isn’t the reason why Gods Unchained has barely dented Ethereum’s network load.

Instead, Gods Unchained has managed to minimize load on the Ethereum network by batching hundreds of transfers together into singular transactions, which drastically reduces the size of the transaction while also keeping fees low. This has allowed it to create and transfer more non-fungible tokens than any other Ethereum-based game without adversely affecting the network, which will allow users to trade without the delays seen in earlier NFT trading games.