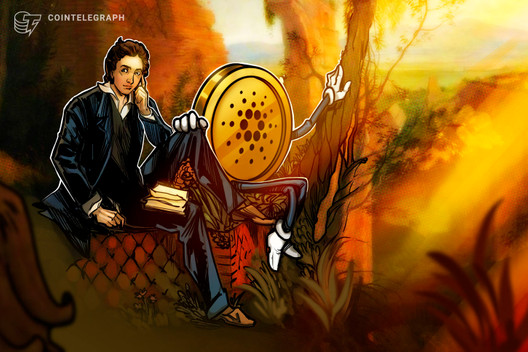 Ever since Charles Hoskinson issued an update on “Shelley,” Cardano’s price and community have adopted a bullish mood.

Cardano (ADA) has seen its value increase by around 50% since May 25. This recent value hike comes in the wake of project co-founder Charles Hoskinson revealing the roadmap for Cardano’s much-hyped “Shelley” upgrade via a YouTube podcast hosted by crypto pundit Lark Davis, also known as Cryptolark.

As part of the aforementioned upgrade, the Cardano ecosystem will transition from being a centralized network to a distributed one. In regard to the matter, Hoskinson stated: “This is like Ripple changing its consensus protocol. […] No cryptocurrency has really done this to this scale after they’ve rolled out.”

Over the last few years, a couple of developer teams working for Input Output HK, the parent body overseeing Cardano’s activities that is commonly referred to as IOHK, have been concentrating their efforts on developing two unique versions of the project’s staking protocol: a Byron-derived approach, which is currently live, and a “Haskell”-based Shelley system. In Hoskinson’s own words, the Shelley transition will most likely be completed by the first week of July.

Providing his insights on the matter, Bakyt Azimkanov, the director of global communications and marketing for the Cardano Foundation, told Cointelegraph that following the recent Byron reboot, the Cardano team has shifted to transitioning the Byron codebase to the Shelley protocol. He added that the process is being carried out in two phases: Testnet 1 for friends and family (around 20 top-performing stake pools, i.e., pioneers) and Testnet 2 for the general public.

“Shelley is being developed with an assurance that requires us to use a thorough testing approach. The protocol will serve as the springboard for transactions of the 21st century.”

Cardano’s team told Cointelegraph that Shelley is basically one of the five development phases related to the project. In this regard, Shelley will look to build upon the sound foundation laid by “Byron,” thus setting the stage for future eras and functionalities. However, as pointed out earlier, the ultimate aim of this latest upgrade will be to make the Cardano ecosystem completely autonomous by decentralizing the platform’s internal operational activities.

In terms of how Shelley will deliver on its promise of decentralization, the team hopes that it will ensure that individuals who own ADA, regardless of the quantity possessed, can participate within the Cardano ecosystem because of the proof-of-stake system that is already being used by the currency. Additionally, by delegating their stake, token holders will have full freedom to participate and run the network.

Furthermore, the update will allow ADA holders to come together and form stake pools. Not only that, but it will also provide monetary incentives to stakeholders so that they follow the protocol as well as set up the required infrastructure for running nodes in a smooth and seamless manner. On the subject, Azimkanov pointed out:

With the rollout of Shelley, Cardano’s native consensus algorithm will be upgraded to “Ouroboros Praos.” The Ouroboros family of protocols has been devised using a host of peer-reviewed research that has been conducted by IOHK in conjunction with the Blockchain Technology Laboratory at the University of Edinburgh. Additionally, it is worth mentioning that Ouroboros Praos builds upon the security and scalability foundation laid out by the “Ouroboros Classic” protocol that was used during the Byron era.

Also, through the deployment of Shelley, the Cardano development team claims that its project will be able to considerably reduce Cardano’s overall energy consumption quotient, especially when compared to proof-of-work-based blockchain systems. This, in turn, will minimize the carbon footprint of its users as well as the system as a whole, thus making sure that Cardano remains sustainable in the long run. Furthermore, in case one of Cardano’s servers is compromised, the update makes it next to impossible for hackers to rewrite past blocks — or write a false history — thus ensuring the immutability of its native blockchain.

Lastly, Ouroboros Praos will ensure that blocks within the Cardano ecosystem are created by slot leaders that have been picked via a randomized selection process. By making use of such a system, Cardano seeks to become more decentralized and thus make use of a greater level of security and robustness.

Not only that, but owing to the private nature of Ouroboros Praos’ selection process, slot leaders remain unknown up until it’s their turn to take control, thereby making it difficult for miscreants to determine whom they should initiate an attack against. Expounding his views on Cardano’s eagerly awaited protocol upgrade, David Waslen, the co-founder and CEO of HedgeTrade — a crypto investing platform — told Cointelegraph:

“They’ve been building and heavily testing out since 2017, are extensively peer-reviewed, and are shooting for becoming the ‘javascript of blockchain.’ The incentivized Shelley testnet and subsequent F&F testing have been considered a success, paving the way for the recent roadmap announcement outlining further upgrades until the hard fork is complete. It’s no surprise there was excitement and rallying around the ADA coin recently.”

The week after Hoskinson announced the potential release date for Shelley, ADA’s price swiftly jumped from $0.052 to $0.088, thereby showcasing a spike of nearly 70% at its peak. Not only that, but even the currency’s daily trade volume increased fourfold during the same time window.

However, since June 4, the top-10 altcoin has been on the receiving end of a slight pullback, with the currency dropping by around 6% over the past couple of weeks.

Cardano price chart following the announcement on May 25. Source: Coin360.com

Just two weeks after the Shelley testnet was opened up to ADA’s stake pool operators, IOHK announced the release of “Daedalus,” a lightweight Cardano wallet that has been created primarily for testing purposes. It is touted to be the first of many Daedalus releases that will be fully compatible with Cardano’s Shelly (Haskell) testnet.

From a more technical standpoint, the aforementioned wallet release is designed to provide users with a number of basic features such as creating, deleting and restoring Shelley wallets, as well as performing transactions within the Cardano ecosystem.

Additionally, according to a newsletter released recently, the total number of stake pools operating in the Cardano network has already surpassed 200. And while some participants might have set up more than a single pool, a representative for the firm said: “To see this number already is a testament to the competency and commitment of the Cardano community.”

On June 11, IOHK announced that it had become part of the Hyperledger association, an open-source community that seeks to foster blockchain-based innovation. According to a representative, this latest collaboration will not only allow Cardano’s market visibility to improve drastically but also help spur the adoption of enterprise blockchain solutions across the globe.

Lastly, earlier in June, Emurgo — a blockchain firm tasked with promoting Cardano’s adoption worldwide — announced that it was entering into a partnership with Ergo — a PoW protocol providing financial contracts — to jointly explore the domain of stablecoin offerings and financial services applications. As part of the deal, it is being reported that both Emurgo and Ergo will look to create a number of niche decentralized finance solutions that will bring Cardano to a completely new segment of investors.