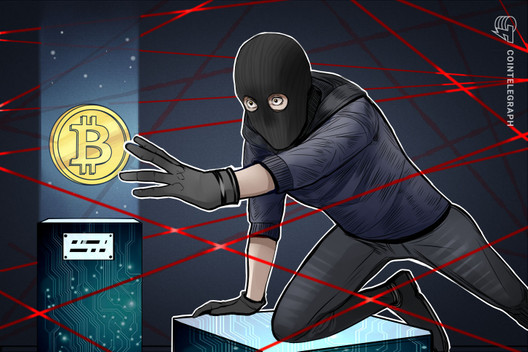 Cryptocurrency exchange Cashaa said hackers took 336 bitcoin from one of its wallets. The company has stopped all crypto-related transactions.

U.K. based cryptocurrency exchange Cashaa reported hackers took more than 336 Bitcoin. The company has stopped all the crypto-related transactions, however, prima facia users are not affected by this hack.

In a media brief shared with Cointelegraph, Kumar Gaurav, CEO of Cashaa said that one of their wallets was compromised and more than 336 Bitcoin was sent to the hacker. He also suspects that hacker is from east Delhi, India. The company has filed a cybercrime incident report to the Delhi crime bureau with acknowledgment number 20807200031555 under the cryptocurrency crime category.

Cashaa suspects malware was installed onto the computer used to make exchange transfers like user withdrawals. The malware notified the hacker when an employee logged into the account at 1:23 pm on July 10 and made two transfers from the wallet. Cashaa was using a Blockchain.com wallet to store and send BTC. Kumar said to Cointelegraph:

“We are still investigating the damage caused by the incident and suspend all the withdrawals for 24 hours. We have called the board meeting to decide whether the company will bear all the losses.”

However, the main concern of Cashaa is to not allow hackers to sell the bitcoin on exchanges. In a tweet, the company also provided the bitcoin address (14RYUUaMW1shoxCav4znEh64xnTtL3a2Ek) of the hacker to track the movement of the stolen funds. By seeing the pattern of transactions from the reported address, there is some possibility that coin mixture software is being used to move the funds and reduce traceability.

Kumar blamed an increase in hacking incidents on the exchanges that support trading where these hackers can deposit the funds. He said:

“Everyone working in the crypto industry has to work very hard to bring the same level of security which currently an average person has when dealing with a bank account. As of today, hackers are very confident to hack crypto addresses and move it through exchanges that are facilitating such laundering through their systems. Exchanges like these must be shut down and owners of these exchanges should be charged with money laundering facilitation crime.”

Investigating agencies including Delhi Police Cyber Crime department are already on the case. Also, all the crypto exchanges have been notified about the hacker address to block any Bitcoin coming from it.

Almost all exchanges have extended support to Cashaa in monitoring the addresses and report any suspicious transactions. Kumar said:

“We are glad that all majors exchanges in India like CoinDCX, WazirX and Bitbns as well as international Exchanges like Binance have shown their quick support. We like to give a strong message to the hackers that they can’t just hack bitcoin thinking they will able to cash out.”

Nischal Shetty, Founder and CEO of WazirX, an Indian cryptocurrency exchange, told Cointelegraph that “we will help Cashaa in all the manner and also working on setting up certain security standards for exchanges.” He said:

“It’s unfortunate that there has been a hack. WazirX will ensure that we lock any funds that reach us from the hacked wallet. We have informed the Binance team as well. Also, as an industry, we’re working on setting up certain standards to ensure that every exchange adheres to a general set of security standards. This will help prevent such incidents in the crypto ecosystem.”