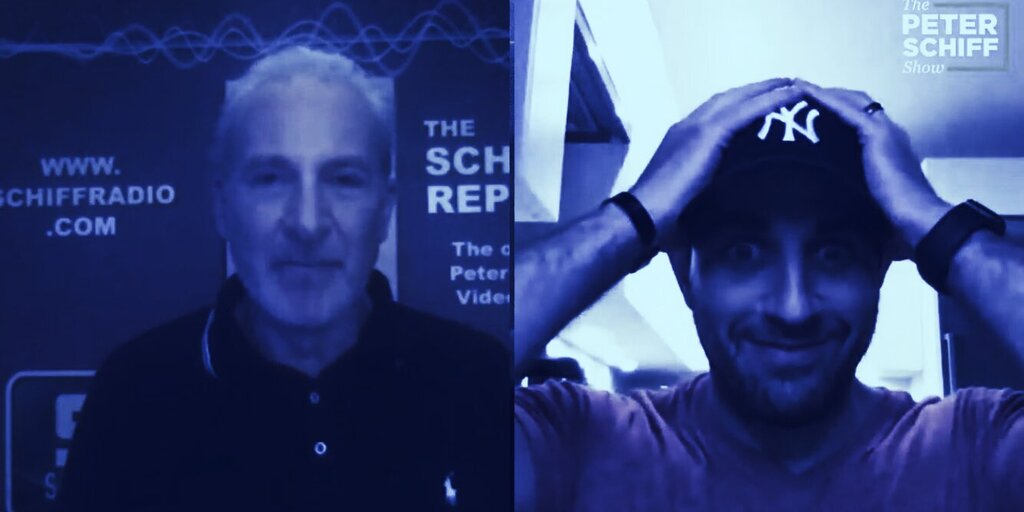 Morgan Creek Digital co-founder Anthony Pompliano got into a heated debate with well-known Bitcoin critic and gold bug Peter Schiff today. For nearly two hours on  “The Peter Schiff Show, the two duked it out over real gold, or so-called digital gold, was the right stuff.

The consensus was not achieved.

They did however mostly agree that the US dollar is currently being devalued and is potentially falling into an abyss.

Said Schiff:  “We’re printing forever. It’s zero percent forever. So now the bottom’s going to drop out of the dollar, I think gold’s going to go through the roof. Gold can go to infinity because the dollar can go to zero.”

Pompliano countered that since an average of 2,500 to 3,000 tons of gold is being mined every year—and we still don’t know the exact amount or its maximum supply on the planet— gold is comparatively a sucker’s bet. Conversely, Bitcoin’s supply is finite and demonstrable. Its emission is well-known, mathematically provable and cannot exceed 21 million coins.

Crypto continues to be the best performing asset class in this economic recession.

Every investor needs to get off zero.

Furthermore, despite gold also hitting a new all-time high today, Bitcoin has outperformed the key precious metal in dynamics over the past decade, Pompliano argued, adding that since the beginning of the year, its value in US dollars has grown by 43.4%—versus 27.2% for gold.

Finally, the supply of Bitcoin was recently halved, which, in turn, could lead to an increase in demand—especially amid the weakening of fiat currencies, Pompliano noted.

Yet, it seemed like Pompliano’s unstoppable Bitcoin force met its immovable object in Schiff. The proponent of traditional precious metals noted that around 200,000 tons of gold were produced in the world, and while we can’t say with any certainty how much is left, annual production does not exceed 1% on average.

Schiff also added that gold, unlike Bitcoin, has real uses in various industries—for example, it is used for the manufacturing of computer chips and jewelry. Additionally, the precious metal has proven itself as a means of preserving capital throughout thousands of years of human history—while Bitcoin has only been around for 11 years, Schiff noted.

He also added that the world’s central banks will most likely continue to buy gold as reserves—since it’s an asset they’re familiar with—which will act as a catalyst for further price growth.

During the podcast. Schiff also highlighted that during the two of the last three times Bitcoin rose above $10,000—in October 2019 and February 2020—it subsequently fell by 38% and 63%. In May, in a similar case, the pullback was 15%. The expert expressed confidence that the correction will follow this time as well, the only question is—how big?

It will probably come as no surprise that Pompliano disagreed.