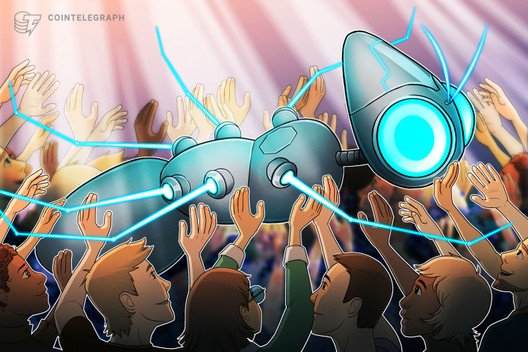 More enterprises are using public blockchains as the space matures, but what does this mean for private blockchain adoption?

Some of the billion-dollar businesses across the globe have been embracing blockchain technology to efficiently share sensitive data between multiple parties across a single network. While the concept is welcome, early adopters of blockchain technology have often found themselves lured toward private networks due to security concerns and a greater need for control.

“At the beginning of the blockchain revolution, a lot of enterprises were keen to experiment with blockchain but questioned the resiliency, privacy and ability to customize public blockchains. Private blockchains were seen as a more attractive alternative. However, public blockchains have grown and matured and overcome most if not all of these implementation challenges.”

According to Tapscott, today’s blockchain space resembles the early days of the internet. He noted that while enterprises were once concerned with an “unwieldy public internet,” organizations turned to ethernets for security and reliability. “Ethernets were the solution pitched by consultants and legacy technology companies. They failed, and the internet won. The same thing is happening today,” he said.

A report by Big Four firm Ernst & Young published in November 2019 found that 75% of survey respondents are likely to use a public blockchain in the future. Almost a year later, that future has already started to unfold. For example, Coke One North America, or CONA, wants to leverage the Baseline Protocol to establish a “Coca-Cola Bottling Harbor” to enable a low-barrier network onboarding process for Coca-Cola bottling suppliers.

The project will use the Baseline Protocol as a technical backbone to streamline the process of internal bottlers-suppliers providing products to the bottling network. In addition, external suppliers, like raw materials vendors, will also benefit from a single, private network aimed at increasing supply chain efficiencies. CONA will “baseline” network data to the public Ethereum mainnet, demonstrating the capabilities and benefits of using a public blockchain for a common enterprise use case — supply chain management.

John Wolpert, a leading developer at ConsenSys and the chair of Baseline Protocol’s technical steering committee, told Cointelegraph that the Baseline Protocol is a technique, or set of specifications, which were formed as part of the Ethereum OASIS Open Project. The goal behind Baseline is to accelerate the development and adoption of the Ethereum mainnet as an integration fabric for enterprises, adding:

“Baseline protocol is a set of techniques that involves messages, digital signatures, hashing and zero-knowledge proofs. All of this is mixed up into sequences that have utility when organizations use a public or private blockchain, or any state machine for that matter. It’s used as a common frame of reference for record-keeping.”

According to Wolpert, the concept behind Baseline Protocol demonstrates that blockchains — both private and public — are not safe databases: “Shared databases have lots of uses, but don’t think they are secure databases used for transparency. Even on a private network, an administrator in a consortium can get hacked.” He added: “Anyone running a node can trace that metadata to know what’s going on.”

“Now, my billion-dollar ERP system can tell me on a record-by-record basis with very good security and great compartmentalization that my counterparties also know the same thing as I do. This reduces counterparty risk, which is a billion-dollar issue.”

According to Tapscott, Ethereum’s Baseline initiative clearly demonstrates that private, secure, enterprise-grade blockchain applications can be built on public blockchains. While this may be, Brian Behlendorf, the executive director of Hyperledger, told Cointelegraph that it’s been evident for a while that enterprises can use public blockchains:

“Enterprise can use public blockchains to occasionally plant anchors from permissioned blockchains as a way to address censorship-resistance and decentralization concerns without needing the complexity of zero-knowledge proofs to protect confidential data.”

Sunny Lu, the CEO of VeChain, told Cointelegraph that the company was initially started in 2015 as a business application to trace fashion and luxury goods back to their origins to ensure authenticity. In 2017, Lu mentioned that VeChain wanted to incorporate more capabilities for enterprises to use a public blockchain. Although he considered Ethereum, Lu launched the VeChain network in 2018, as he was confident that public blockchains would be the next generation of enterprise adoption. According to Lu, public blockchains have always been suitable for enterprises, it just wasn’t an obvious concept initially:

“Enterprises don’t like change, as many already have stable technology platforms. These companies are also frightened to lose control and don’t want all of their information public and transparent. This is why private, consortium blockchains seemed like a good fit at first. However, when you dive further into blockchain, you discover that consortium blockchains actually hamper growth and collaboration.”

Lu pointed out that the nature of blockchain networks is to accommodate multiple players focused on solving the same goals: “Sometimes when enterprises develop a proof-of-concept and want more collaboration, they discover they need a public blockchain.”

This in mind, public blockchains could be leveraged for appropriate use cases, many of which involve sharing data in a transparent manner between different entities where hashed data is used as validation and points of integrity. Private data that shouldn’t be shared, however, should be kept offline. Lu commented: “Enterprises must avoid the concept of using blockchain for the sake of it. Rather, they need to think about the value of blockchain for business.”

The end of private blockchains?

“Public blockchains were first to market, with Bitcoin launched more than a decade ago and Ethereum [is] over five years old. They have been battle-tested, attacked and challenged and have proven incredibly resilient. They are also open, which means anyone can iterate and innovate on them and thus will achieve network effects far faster.”

Tapscott further pointed out that public blockchains have a product-market fit for developing in key areas like decentralized finance and stablecoin adoption. For example, some platforms may rely on a token system that allows enterprises to pay for gas fees and the use of nodes and for the general public to trade that token on the exchanges.

Yet while the benefits of public blockchains for enterprises are becoming more apparent, Lu pointed out that adoption challenges still remain. He mentioned that while it’s always been difficult to reach a technical consensus, the current challenge is achieving a business consensus: “For instance, an electric car company using VeChain needs to work with a battery manufacturer and insurance companies. Yet all of these players have different business interests.”

Challenges aside, Behlendorf further noted that while innovations in the public blockchain space are becoming clear, a technique like Baseline Protocol may actually perform better on a private network:

“Right now, I know of no Hyperledger project that plans to specifically add Baseline Protocol support, but of course, they’re free to do so, and some have suggested that Baseline might actually perform better on permissioned ledgers due to the gas costs for the cryptography required.”