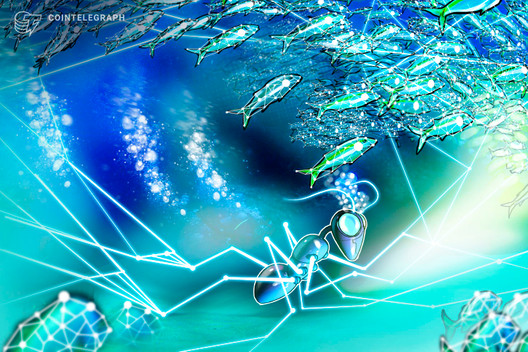 Imagine sitting down at your favorite restaurant and ordering a fresh filet of salmon, only to later discover that the “salmon” dish wasn’t actually salmon. As horrifying as it may sound, this scenario is actually quite common.

A recent study from the conservation group Oceana found that 20% of fish samples sold to consumers in the United States were mislabeled. The study further revealed that seafood is frequently misrepresented at restaurants and smaller markets, versus fish products purchased from grocery stores. While seafood fraud has become a global problem, Norway in particular is struggling with fish products being illegally placed on the market for financial gain.

Steinar Sønsteby, CEO of Atea ASA — an IT infrastructure provider for the Nordic and Baltic region — told Cointelegraph that the Norwegian seafood industry exports more than $800 million worth of fish per year. He further noted that the country exported more than 2.7 million tons of seafood in 2019, which is the equivalent of 25,000 meals per minute. While impressive, it’s become challenging to ensure that Nordic fish farms are being sustainable and transparent. Sønsteby said:

“It’s been said that up to 40 percent of fish in the world doesn’t come from where it’s labeled. The Norway fish farming industry in particular has been accused multiple times of seafood fraud, along with not being sustainable. It’s been mentioned that Norwegian fish farmers pollute the sea with the food they use to catch fish. They’ve also been accused of using antibiotics in the fish they catch.”

To combat the challenges faced by Norway’s billion-dollar seafood sector, Sønsteby explained that proof is required to demonstrate what actually takes place in the region’s oceans and seas. A more transparent and regulated supply chain, for instance, would ensure that all parties involved in Norway’s seafood industry are acting accordingly.

As one of the possible ways to provide transparency, Atea announced an industry-wide collaboration with tech giant IBM and the Norwegian Seafood Association, Sjømatbedriftene, to use blockchain as a source for sharing supply chain data. The goal is to ensure that safer, better seafood is sold to consumers worldwide. “This is an incredible opportunity to improve the quality of the products Norway shares with the world,” Sønsteby mentioned.

A blockchain network specifically for seafood

“Some of the differences though is this allows for certain customization, giving Norway’s seafood industry their own governance model in regards to data sharing and who gets to see what information. IBM Blockchain Transparent Supply allows networks to manage their own membership, securely share documents and create a permanent record of the history of physical and digital assets.”

Since this blockchain network was built specifically for the seafood sector, many Norwegian seafood companies have already begun expressing interest in joining. Braathe noted that Kvarøy Arctic — a leading provider of naturally sea-farmed salmon that will soon deliver products to retailers in the U.S. and Canada — is currently in the process of putting data on the network. Kvarøy Arctic also joined IBM’s Food Trust Network on June 5, as the company has reported a major increase in the demand for fresh seafood in the U.S. in recent months.

Kvarøy Arctic CEO Alf-Gøran Knutsen mentioned that it’s important for customers to know that the seafood they are consuming is not only safe, but also produced in a sustainable and healthy manner. He explained that blockchain can ensure this:

“Blockchain lets us share the fish’s journey from the ocean to the dinner table. This is now more timely than ever, as consumers want more information about where the food they eat comes from.”

BioMar, a leading provider of high-grade fish feed, has also joined the newly formed network, allowing Nordic seafood companies to provide insight into the quality of feed the fish consume.

According to Sønsteby, Atea is currently in discussion with 200 companies in Norway in regards to joining the network, noting that six contracts have already been signed. While the first contract is currently in pilot mode, he hopes that it will be in production by the end of September 2020.

The proof is in the data

While blockchain plays an important role in establishing the truth about supply chain events, data collected from Internet of Things devices is also a major piece in this puzzle.

According to Sønsteby, while IBM provides the underlying blockchain infrastructure, Atea can equip fish farms with all the IoT devices needed to collect data for the blockchain network. He explained that a solution such as this relies entirely on data that is collected, secured and then made trustworthy by being placed on a transparent, yet private and permissioned blockchain like the one leveraged by IBM.

Once data has been properly collected and placed on the blockchain, seafood products can be traced all the way back to the vessel from where they were caught, right up until the consumers are purchasing those products. “A mobile app is underway for consumers to see where exactly their fish come from,” Sønsteby said, adding that the app should help consumers discover where their food products come from: “I think there will be a push/pull effect. If consumers are asking for this, retailers will need to provide it.”

The cost of knowing

While blockchain can provide transparency into vulnerable supply chains, there is a cost associated with it. Sønsteby pointed out that consumers will have to pay higher prices for seafood products that can be traced back to their sources. For instance, the Norwegian Seafood Association thinks that Norway’s seafood industry can increase fish prices by up to 5% in the short term.

Although these seafood products will be more expensive, a recent IBM study found that 71% of consumers consider traceability important and are willing to pay higher prices for it. Braathe from IBM further noted that high-priced goods will likely result in less food waste and illness:

“This new blockchain-based network will allow customers in-store to know the fjord where the fish is from, when it was fished, the feed it has eaten and whether the facility uses sustainable methods. What we are doing is combining blockchain with IoT for freshness, which brings huge potential in reducing food waste with technology.”

However, while consumers willing to pay a bit more will gain assurance that their salmon is genuine, it may be challenging for fish farmers to implement the technology, both from a cost and cultural perspective. The Food and Agriculture Organization of the United Nations recently published a report titled, “Blockchain Application in Seafood Value Chains,” which reveals the high prices associated with blockchain.

“The biggest challenge we are currently facing is that many Nordic fish farmers are not tech savvy or aware of blockchain,” explained Sønsteby. In order to ease this tension, Sønsteby mentioned that Atea isn’t charging the fish farms for the solution up front, but is rather taking a “paid for consumption” approach.