Former Mt. Gox CEO Mark Karpeles: Craig Wright is 'Either a Thief or a Fraud' Former Mt. Gox CEO Mark Karpeles insists that the 80,000 Bitcoin (BTC) that Dr. Wright lays claim to was stolen from the exchange in March 2011. Cryptocurrency experts side with Karpeles.

Karpeles confirmed to Cointelegraph that the Bitcoins residing at 1FeexV6bAHb8ybZjqQMjJrcCrHGW9sb6uF were stolen from Mt. Gox:

“I confirm, this was confirmed in 2011 and records are also part of court documents available publicly.”

Also, speculating about Dr. Wright’s motivation in this turn of events in the Tulip Trust saga, Karpeles opined that nChain’s chief scientist is just trying to put forward some “evidence” of his status:

“To be quite honest, I think Wright is just trying to use this address as ‘evidence’ he is an early Bitcoin user with tons of BTC, and finds himself in a difficult situation where he is either a thief (if he keeps his claims up) or a fraud (if he admits being wrong)”.

The court accepted the skype transcript

Meanwhile, Dr. Wright is questioning the validity of evidence that these Bitcoins were ever stolen from Mt. Gox:

“The only evidence of the allegation regarding the origin of 1Feex Bitcoin of which I am aware is a purported Skype chat between Mark Karpeles and Jed McCaleb, but that document is only a text file rather than a validated Skype log.  No other evidence or any credible evidence, such as internal / accounting records from Mt Gox, has been put forward.”

It should be noted that the Skype transcript was accepted by the court and the litigating parties have not questioned its authenticity.

Dr. Wright claims that he made an arrangement to acquire these Bitcoins in late February 2011, finalizing the transaction on March 1 of the same year:

“I agreed to purchase the bitcoin in the 1Feex address in late February 2011 and it was transferred into that address on 1 March that year. The full amount of the Bitcoin, which is now owned by Tulip Trading Limited, remains in that address today.”

He did not specify if the transaction happened on Mt. Gox.

Kim Nilsson, a cybersecurity expert whose team spent months analyzing a series of hacks that led to the eventual collapse of Mt. Gox, completely refuted Dr. Wright’s storyline in an email to Cointelgraph:

“The strongest independent proof I can bring is that the transaction that sent the 80k BTC to that address was entirely funded by Mt. Gox addresses, and that the MtGox wallet at the time got completely emptied by this transaction, which is absolutely not normal behavior and not compatible with Wright’s claims of just buying coins from some third party. (And who is this third party then?).”

It should be noted that Mt. Gox’s order books were leaked and the leaked documents did not reveal a transaction for this amount. 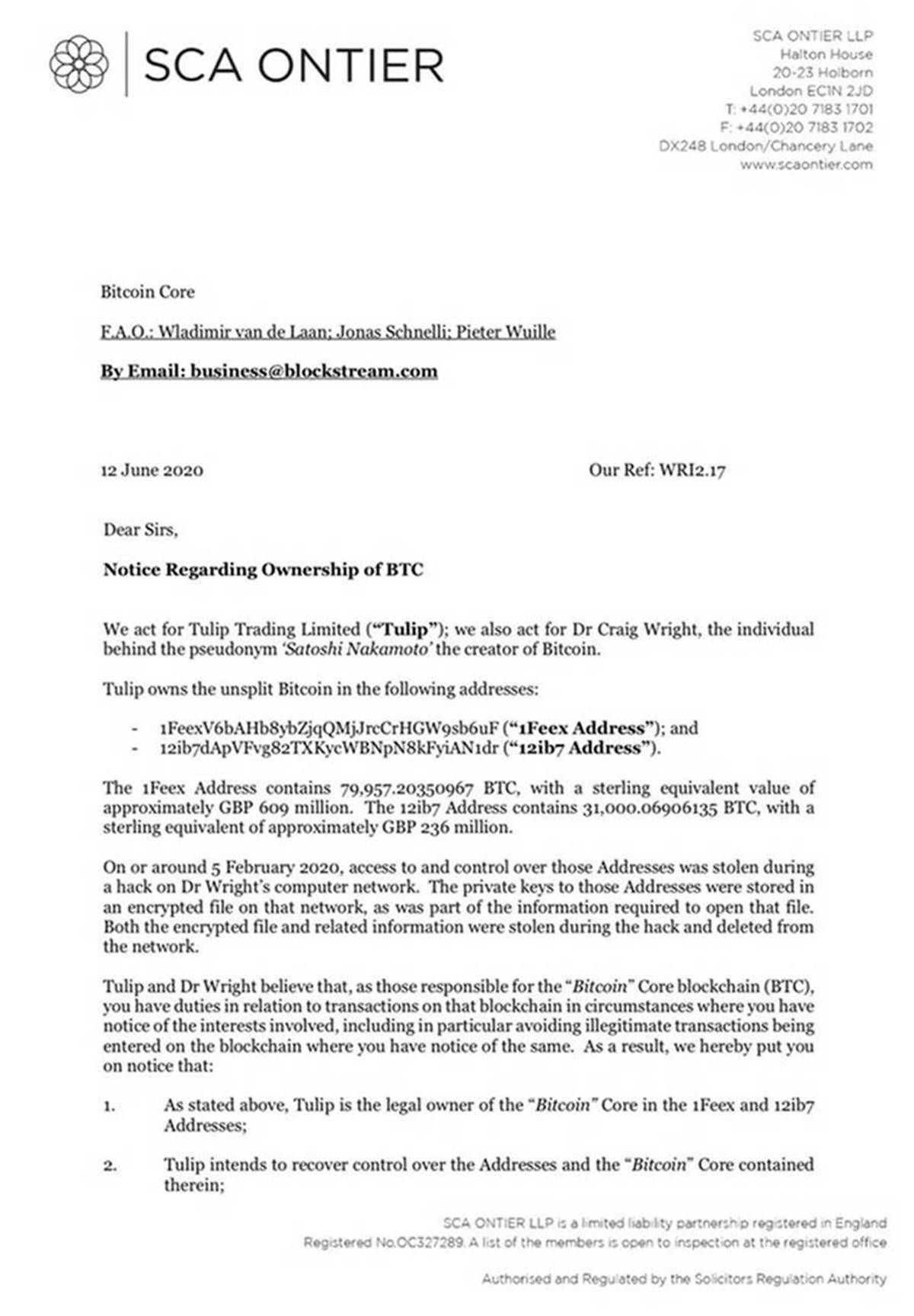 The dumbest thief ever?

The letter that was sent by Dr. Wright’s lawyers to Bitcoin Core developer Wladimir van der Laan (who is not funded by Blockstream) and Blockstream, states that the former lost access to these Bitcoin addresses as a result of a February 5 2020 hack. Interestingly, the purported thief has not moved any of the stolen Bitcoins. Either we are dealing with the world’s dumbest thief or Dr. Wright just keeps on webbing his web.

Sergio Demian Lerner, a notable Bitcoin researcher, agrees that it makes no sense for a thief not to move the loot: “Yes, I agree it makes no sense”. However, Nilson surmised that this is just another case of Dr. Wright trying to control the narrative:

“Far from being some obscure unknown address, plenty of people have known about this address and the theft behind it for years. Wright has presented mere assertions without evidence, yet is acting like the burden of proof is now on everyone else to sufficiently disprove him, setting arbitrary standards for what sort of evidence he will accept. Wright always tries to change the rules rather than concede anything, but no amount of obfuscation or bluster will change the facts, and this is a wildly implausible story he’s pitching with plenty of evidence against it and nothing supporting it.”

This legal exercise puts an additional nail into the coffin of Craig Wright as Satoshi Nakmaoto. It is hard to imagine that Satoshi Nakamoto would even think about using legal means to gain access to some lost or stolen Bitcoins. Since the whole ethos of the cypherpunk towards electronic cash was to create such currency that would be orthogonal to the established government institutions.

Wladimir van der Laan told Cointelegraph that he has no intentions of replying to the letter:

“I’m not at least. No idea about Blockstream, I have nothing to do with them.”

Cointelegraph has reached out to Blockstream for comment, but has not received a response in time of publication.