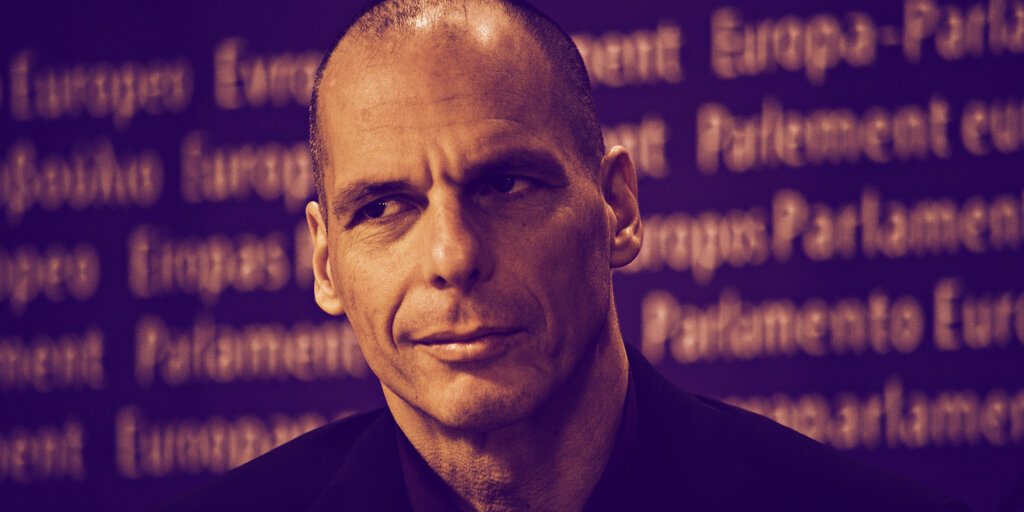 Greece’s former finance minister Yanis Varoufakis knows a thing or two about financial crises. In 2015, when he was in charge, the country was in such financial straits that it was unable to pay €1.6 billion to the International Monetary Fund.

Now he is using that expertise to discuss whether Bitcoin could succeed as a replacement for fiat money. In an open letter published Monday, he argued that Bitcoin shouldn’t replace fiat since this will only make “capitalism uglier, nastier and more dangerous for humanity.”

On the other hand, he said there is some potential in blockchain technology itself.

In his letter, Varoufakis argued that Bitcoin is incapable of reacting to various economic woes—such as the current coronavirus pandemic—because its monetary policy is hardcoded and cannot be changed easily.

“Consider the Crash of 2008 or the more recent 2020 Covid-19-induced crisis. Suppose that Central Banks did not have the capacity instantly to create trillions of dollars, euros, pounds and yen – and instead had to rely on a spontaneous majority of Bitcoin’s users to agree to a massive increase in the supply of money,” wrote Varoufakis, adding, “The result would be a 1929-like collapse of banks and corporations.”

The Bitcoin supply is limited to 21 million, a hard cap that is unlikely to change. Until this hard cap is reached, the supply is created at a constant rate that halves every four years. The Bitcoin network is unable to increase the supply at will—although its proponents argue this is a good thing.

Varoufakis pointed out that Bitcoin ownership is very unequally distributed, and people who own a lot of it won’t be thrilled by the idea of increasing its supply—since it will devalue their own holdings. Thus, if Bitcoin is to replace fiat currencies, it will only exacerbate the problem of wealth inequality during crises and incentivize the rich to retain “their private rents at the expense of the public interest.”

“In short, the free-rider problem that guarantees the maximal reinforcement of any capitalist crisis (in any economy relying on Bitcoin as its main currency) will be turbocharged by the unequal ownership of Bitcoin – which is unavoidable in any monetary system overlaid upon contemporary capitalism,” he noted.

And even if Bitcoin would replace traditional money, Varoufakis argued, it won’t change much for the majority of people in capitalistic systems.

“Property rights over land, resources and machines remain as they are while private equity firms and pension funds continue to own the bulk of shares trading in Wall Street, the City etc,” he wrote, adding that “All that will have changed is that Central Banks will vanish and the community of Bitcoin users will determine the global money supply.”

Nothing will change at firm and company levels as well, Varoufakis continued, since still “Jeff Bezos will still control a massive monopsony-cum-monopoly” while the Facebooks and Exxon-Mobils of the world will continue to dominate their marketplaces and exploit weaker economies.

All the while, private banks will just find new ways to create various assets—but pegged to Bitcoin this time around.

“[Private banks] would […] find ways of creating complex derivatives based on Bitcoin – derivatives that will soon (just like Lehman Brothers’ CDOs prior to 2008) function as stores of value and means of exchange; i.e. as private money,” Varoufakis wrote, adding that “Replacing fiat money with Bitcoin would take us back to a postmodern version of 19th Century America – not exactly a prospect socialists should go to the barricades for.”

All these factors combined will inevitably lead to new depressions, made even worse by Bitcoin’s inability—or the rich’s unwillingness—to increase its supply or adapt to crises in some way or another.

“In short, not only will the democratisation of money via Bitcoin fail to democratise capitalism but it will also give an almighty boost to the forces of regression,” Varoufakis stated.

Summarizing, Varoufakis compared the monetary system to a dog’s tail. As it cannot “wag the capitalist dog” by itself, “democratising money by means of a monetary commons will not democratise economic life but, rather, make capitalism uglier, nastier and more dangerous for humanity.”

Still, Greece’s ex-finance minister reiterated that while Bitcoin might not be the answer to capitalism’s many pitfalls, blockchain technology may very well become instrumental in creating a new kind of financial structure.

“Having said all this, a monetary commons (that may very well rely on something like the blockchain underpinning Bitcoin) will, I have no doubt, be an essential aspect of a democratised economy; of socialism,” Varoufakis concluded.

But what is blockchain, without Bitcoin?