Fighting censorship with blockchain… and Minecraft 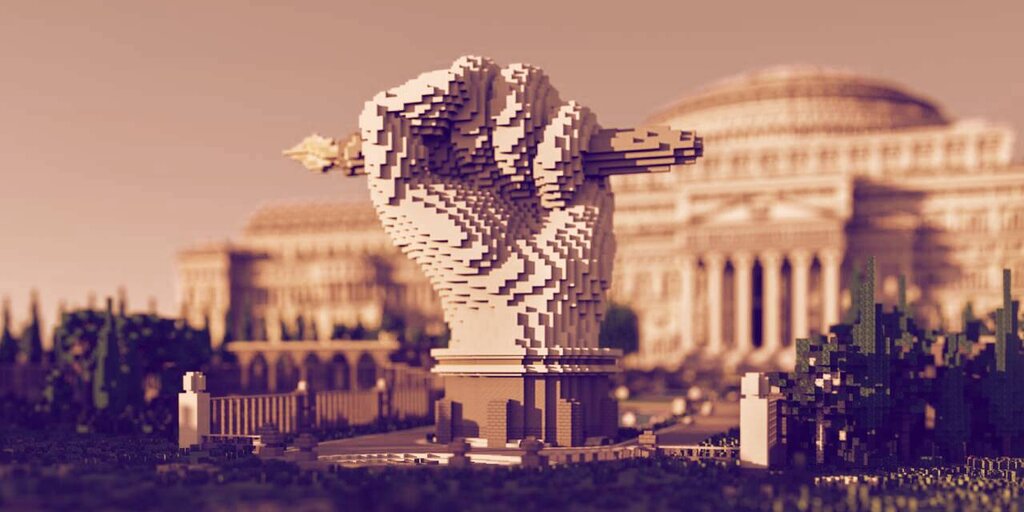 Block-based sandbox game Minecraft is the last place prying government censors expect to find subversive content. Should a government block Minecraft, the most popular game in the world, the whole world would know in an instant. That’s why Reporters without Borders, the NGO that champions press freedom, created The Uncensored Library— an ornate archive of works from prominent censored journalists, hosted in Minecraft.

Climb the stairs of the high-domed library, which sprawls inward from an island whose shores are open to anyone with an internet connection, and you’ll reach rooms packed with works from censored journalists. Jamal Khashoggi—a Saudi Arabian dissident who was assassinated in Turkey in 2018—and Yulia Berezovskaia, an exiled journalist who runs a banned website in Russia, fill some of the 200 books on offer.

World’s most censored journalists now have a home on Minecraft

The Uncensored Library was designed by Reporters Without Borders in collaboration with BlockWorks, a London-based company that builds elaborate Minecraft worlds, alongside two media agencies. Comprising two million blocks, the library can be downloaded from BlockWorks’ website—and already it’s taken on a life of its own. “We already have cases of many other people hosting the library on their own server,”  James Delaney, founder of BlockWorks, told Decrypt. “Once it’s been released, it multiplies, and it is therefore much more difficult to take down.” Since its launch in mid-March, its 100,000 visitors—about 3,000 of whom were from heavily censored countries—have, combined, spent at least five years in the library.

“We already have cases of many other people hosting the Uncensored Library on their own server.”

The Uncensored Library is one of many creative initiatives to circumvent government censorship; with multiple instances of the library hosted on servers all over the world, it’s an example of how decentralization is helping to protect freedom of speech. Other projects are using decentralized technologies like blockchain—no relation to Minecraft’s block-based world—to help protect free speech. Blockchain’s decentralized ledger is incredibly difficult to undermine and, since anyone can host it, near impossible to stop.

Everipedia’s president, Sam Kazemian, is the proud operator of a decentralized alternative to Wikipedia—one that can’t be scrubbed clean by censors. Whereas countries ban Wikipedia to “try to espouse a different narrative of reality,” said Kazemian, Everipedia can’t be banned, since the authenticity of its content is verified by blockchain’s immutable ledger.

It’s not the content of the encyclopedia entries itself that’s stored on the blockchain, but the number of upvotes to each edit on an article. These votes, recorded in the form of “IQ points,” are hashed on the blockchain and tallied up, allowing users to “come to consensus on the current state of the entire global content pool,” said Kazemian. Then, users can download content from anyone hosting it, secure that they’re getting the most up-to-date version.

Larry Sanger wants Everipedia to be a post-truth Wikipedia

He said that the site attracts 2 million people per month (as well as a core community of around 2,000 power users, who contribute the bulk of the site’s content). Larry Sanger, a co-founder of Wikipedia, served as Everipedia’s chief information officer until 2019, when he quit to work on “Encyclosphere,” another decentralized Wikipedia that’s yet to be released, as well as his own consulting firm. (Sanger now hates Wikipedia, which he called in a blog post last year an “arrogant and controlling oligarchy.”)

Kazemian said that Everipedia is popular in China, even though its domain name, Everipedia.com, is blocked by its immense firewall. People in mainland China have “created random domain names that resolve to what Everipedia.org would have resolved to—the front-end implementation of Everipedia,” he said.

Everipedia's May Editing Challenge was a resounding success. The community managed to create nearly 3,000 pages in the month of May. Come join us in June, you can make a wiki for almost anything. https://t.co/hU4bnf5Is8

Behind the Chinese firewall, these “domain names ping the EOS mainnet for the content hash and host the sites themselves,” he said. Links to these sites are shared around Telegram groups. And the system, though “technically tough,” works, claims Kazemian—IQ points are still logged on the blockchain, so it doesn’t matter who hosts the site.

Everipedia is far from the only project that hosts censored content on the blockchain. On April 23, 2018, an anonymous activist attached a letter to an Ethereum transaction alleging that that Peking University covered up the sexual assault of a student by her professor. And in July 2018, Chinese activists published an investigative report on the blockchain that revealed how Chinese babies are given low-quality vaccines. Another cryptocurrency initiative against the Chinese government’s censorship relies upon technology developed by Micah White, the co-creator of Occupy Wall Street. It involves spreading the message “Reigning Emperor,” which the website claims is banned by the Chinese government, to as many wallets as possible.

There’s another form of censorship resistance: private communication. Whisper protocol, a communication layer built by the Ethereum Foundation in 2016, allows for peer-to-peer messaging. It complements, but is not reliant on, the Ethereum blockchain.

An interlocutor only requires another’s hash—no location, phone number, email or bank account is necessary. And, since there’s no central point of authority, a government can’t snoop in or force a company to hand over details about its users.

The Status Network is one of several blockchain companies using the technology to ward off prying eyes. Its bespoke fork of the Whisper protocol, Waku, supports more users than Whisper and requires less bandwidth. “Our tools are intended to help those who are afraid to freely speak their mind out of fear of oppression and even incarceration,” Corey Petty, Security Lead at Status, told Decrypt.

“Our tools are intended to help those who are afraid to freely speak their mind out of fear of oppression and even incarceration.”

“Everyone should have the right to true privacy if we are to uphold true self expression and preserve democratic culture,” he said. “Pseudonymity, and further anonymity, can actually promote and enable freedom of expression and the free flow of ideas.”

Petty doesn’t think that modern chat apps support these ideals; they harvest user data “which is used to create highly accurate personal profiles on each and every one of us,” he said. “This data is then stored in centralized servers for access by a select few and the target of many.”

With decentralized protocols, censorship-resistance is here to stay. “In the end, yes, privacy does in fact matter, and we should all fight to retain this basic human right,” said Petty.