Examining the Status of Stablecoin Minting and Burning Activities 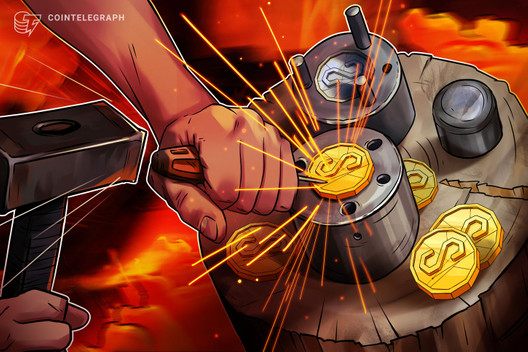 We selectively analyzed six stablecoins — USDT, GUSD, HUSD, PAX, TUSD and USDC — to uncover their minting and burning activities so far in 2020.

As of June 4, six stablecoins — Tether (USDT), Gemini Dollar (GUSD), HUSD (HUSD), PAX Gold (PAXG), TrueUSD (TUSD) and USD Coin (USDC) — have had a total of more than 10,000 minting transactions so far in 2020, totaling $8 billion, with USDT issued on the Ethereum blockchain dominating the stablecoin landscape. The major stablecoin began to explode in early March and drove the market cap of the entire stablecoin market higher. By the end of the April, it was ranked third in size behind Bitcoin (BTC) and Ether (ETH). Its current market capitalization accounts for about 85% of the total stablecoin market capitalization. 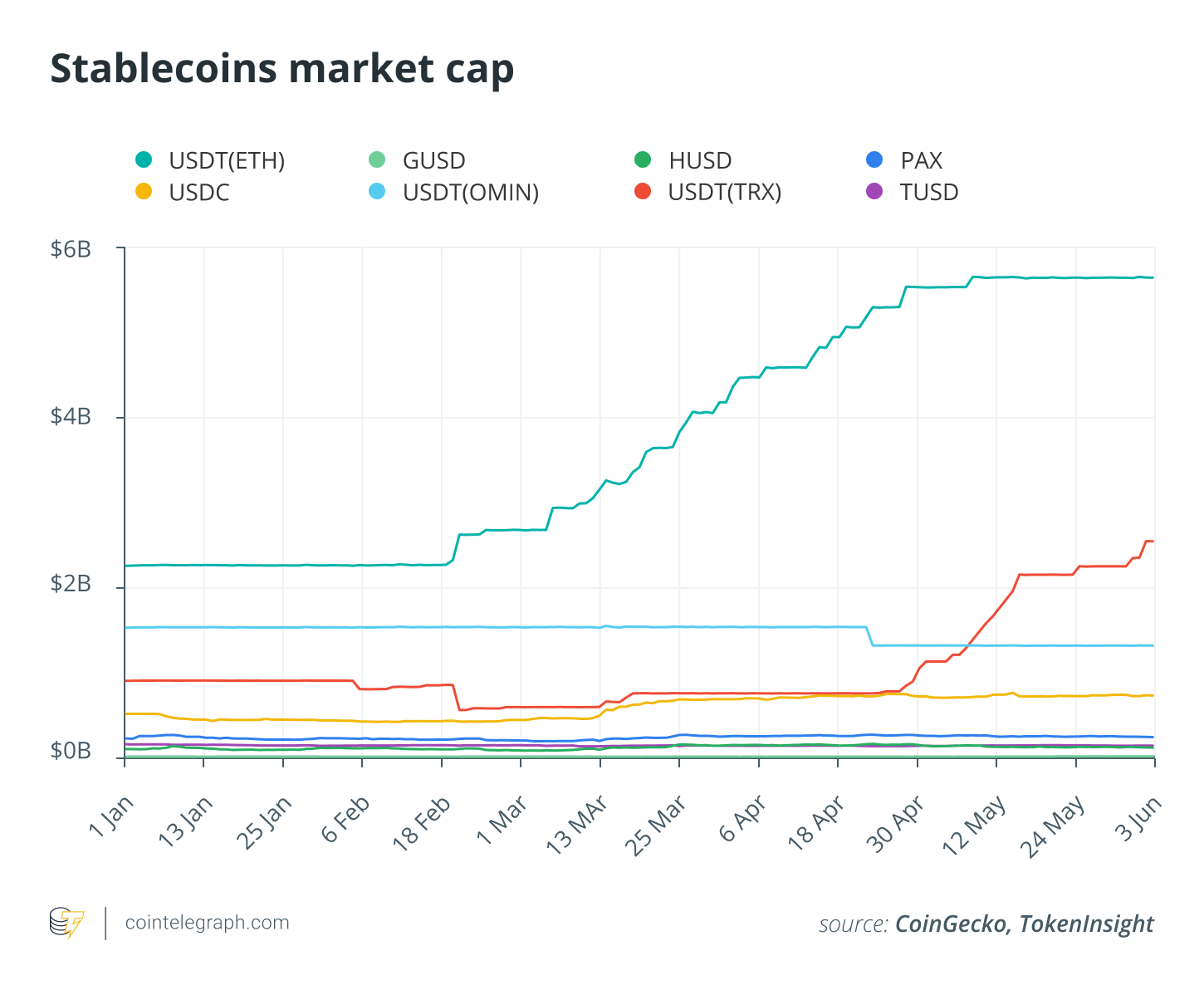 During the most volatile session, in March 2020, the number of minting and burning activities was at a peak, and the dollar value of newly issued tokens also reached its highest point.

In terms of burning activities, there have been nearly 5,600 burning events reported so far in 2020, with the total value of destruction exceeding $3 billion.

Based on the data, we believe that if the trend continues, the number of minting and burning activities for Q2 2020 will be at least equal to the number in Q1 2020. 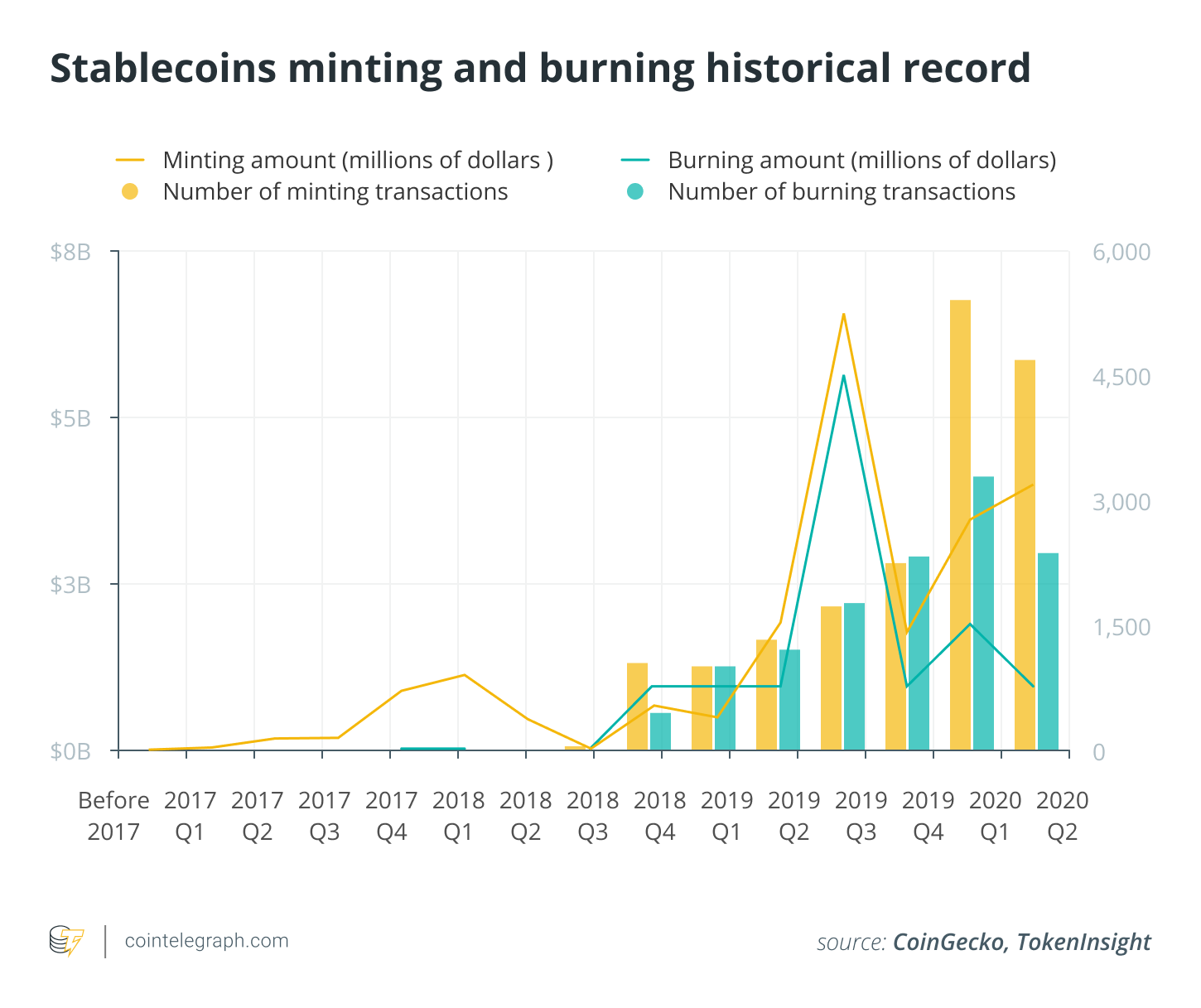 Significant differences in the number of minting activities

The following figure shows the number of minting activities and the dollar value of stablecoins minted in the first five months of 2020. 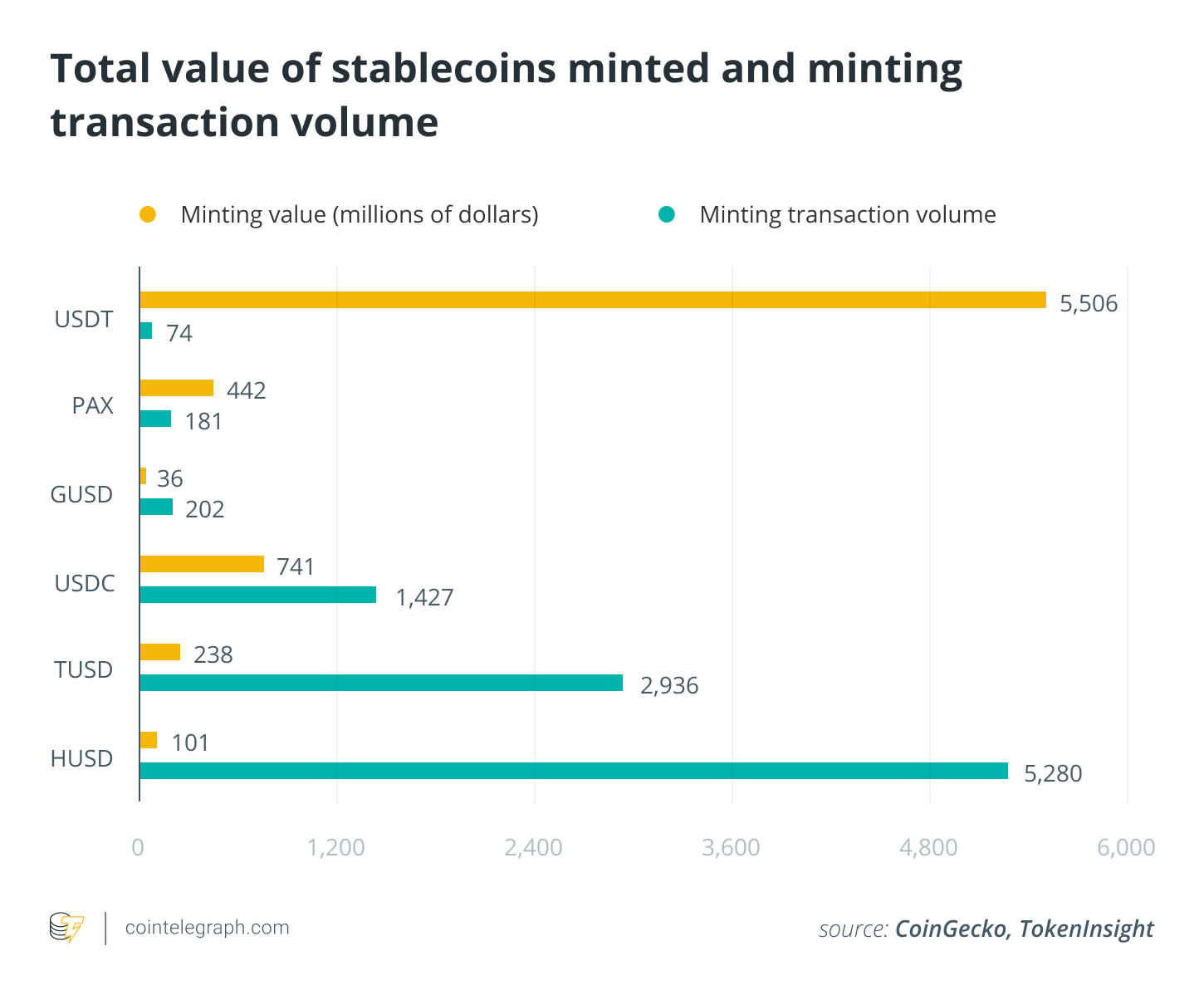 We also looked at data around stablecoin minting in dollar value and transaction activities. Minting activity reached its peak in March, which was also the month with the largest dollar value minted so far in 2020. 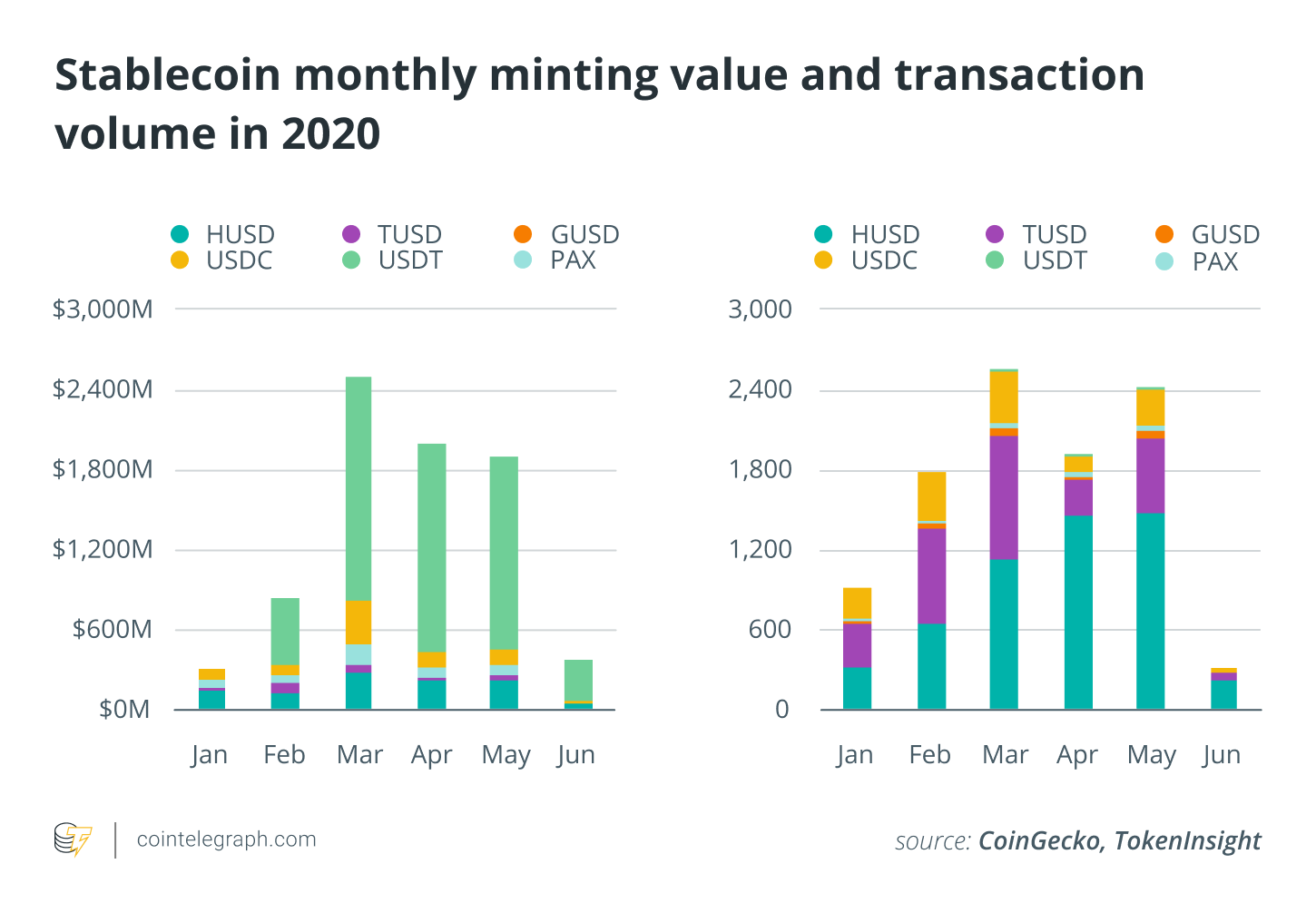 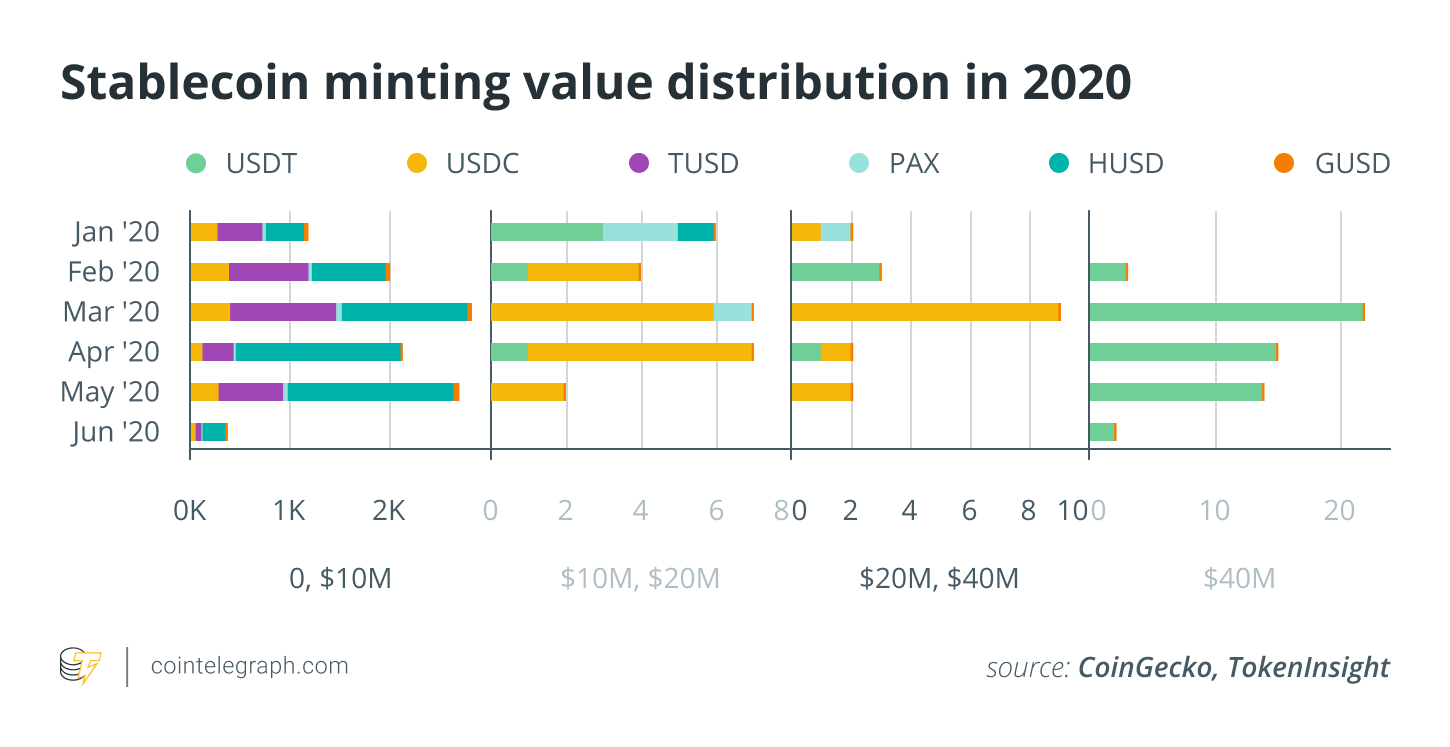 HUSD is the most frequently issued stablecoin in the $10 million section, followed by TUSD. 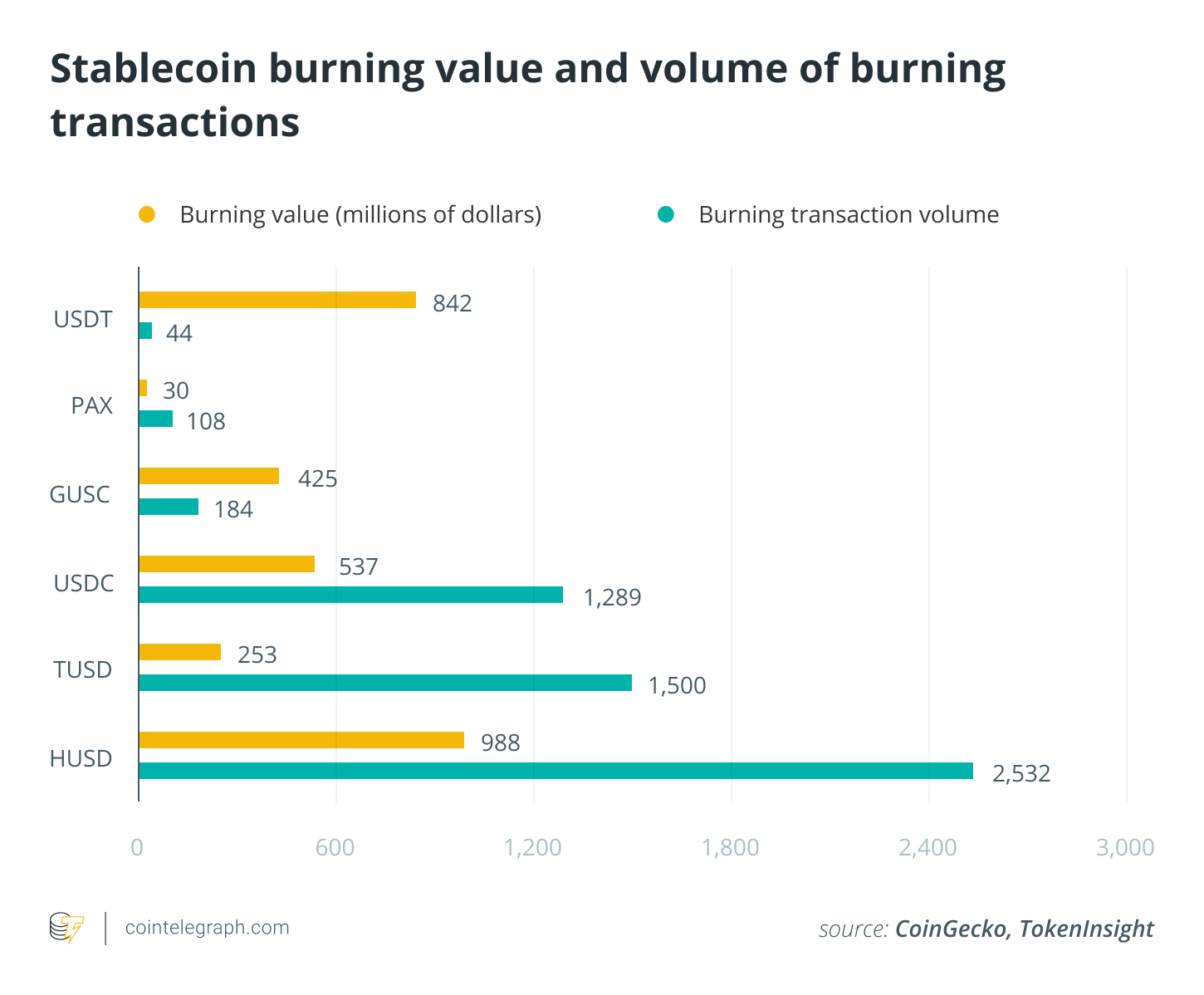 In addition, we have observed that if we exclude the USDT data, the frequency and dollar value of stablecoin destruction per month are relatively average, around 1,000 times and $500 million, respectively.

USDT destruction is characterized by a lower frequency of burning transactions but each being high in value. The value of USDT destruction reached 50% of the total burn value during February 2020. 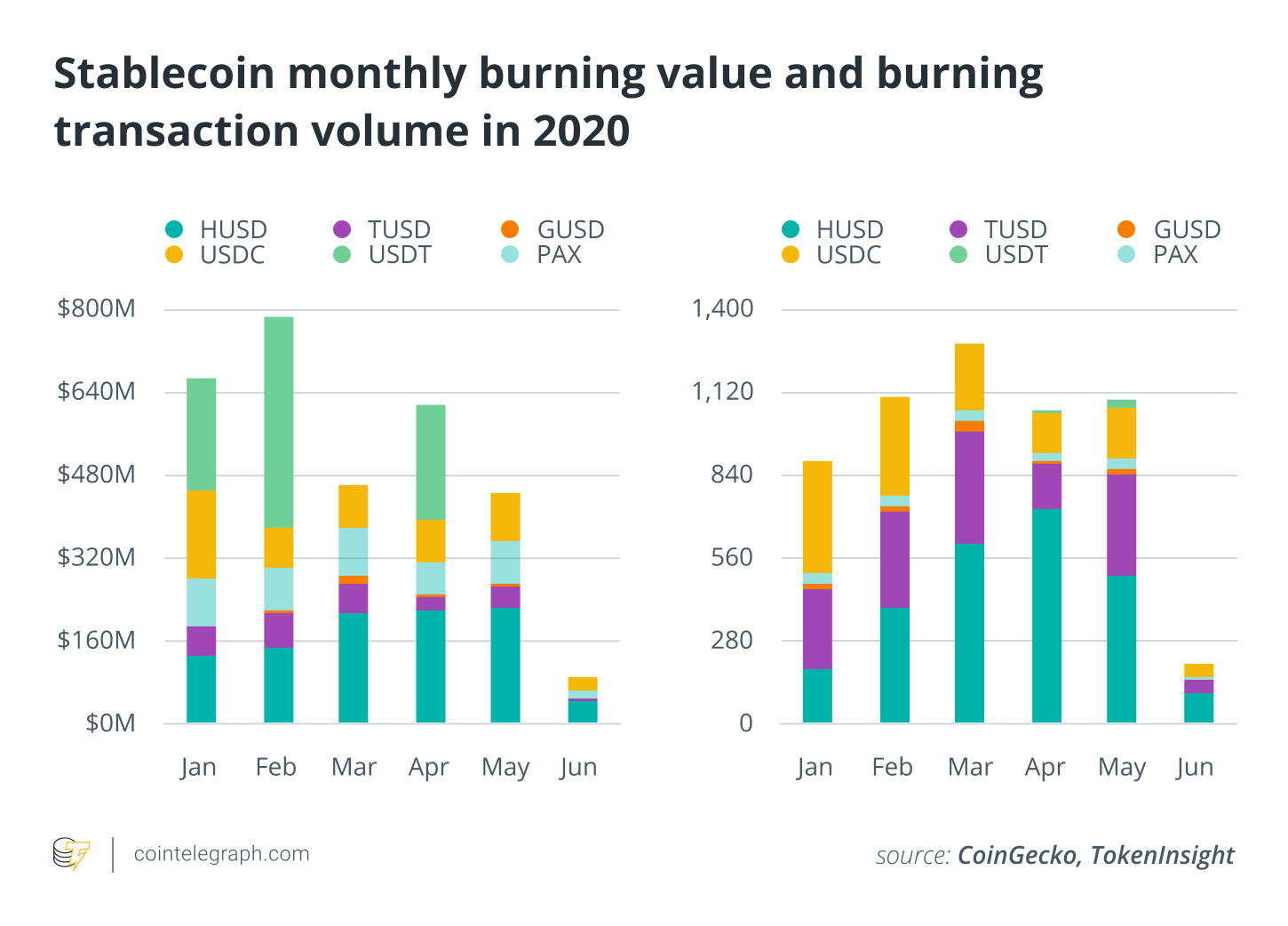 The destruction events are concentrated in the $10 million range and was rarely of high value. Only USDT and USDC made the cut to being greater than or equal to the $40 million bucket per burning transaction. 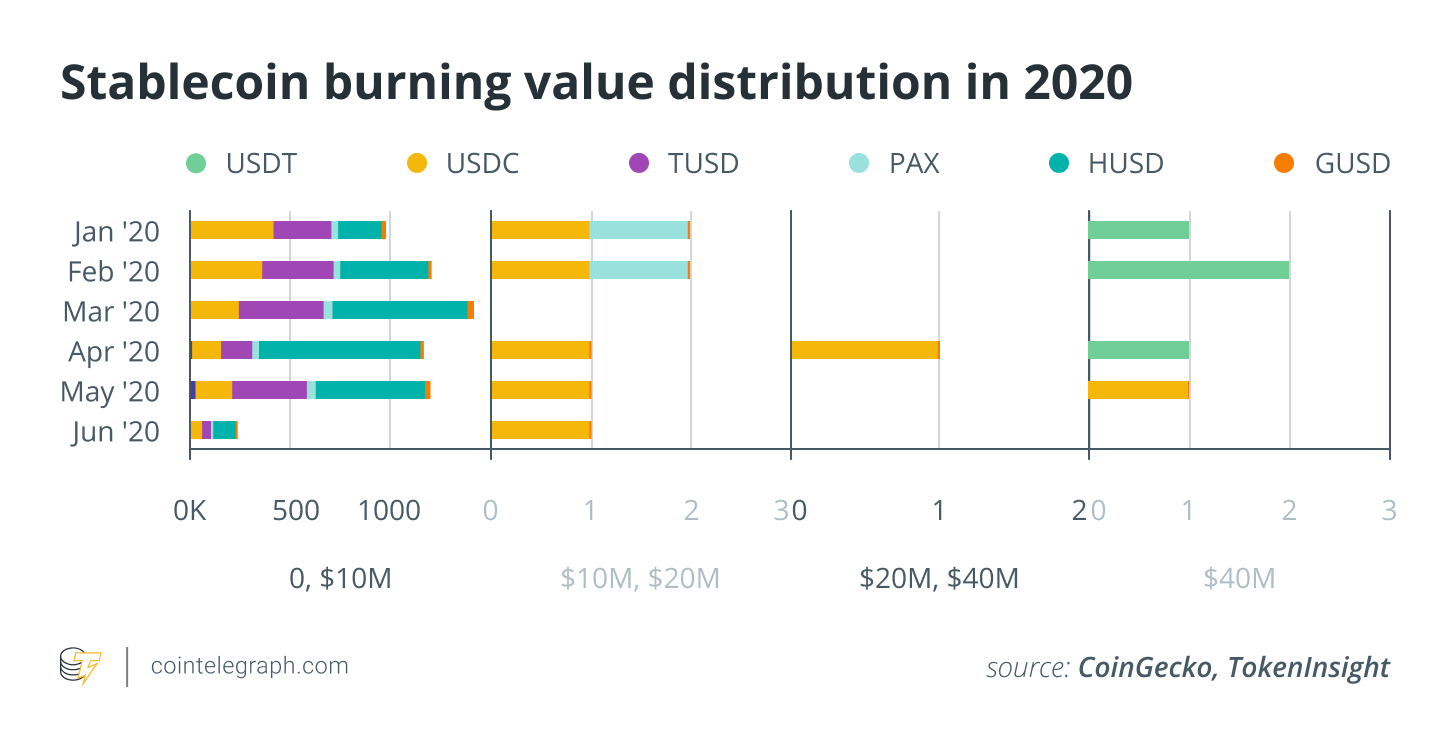 It is worth noting that burning activities in March only capped at $10 million per transaction, with the highest number of burning transactions occurring so far in 2020.

The rise of stablecoins is inevitable. The sector creates endless possibilities in this volatile parallel financial universe. They are not only bringing liquidity to the ecosystem but also driving significant innovations and creating many other use cases to drive the cryptocurrency industry further. However, the industry has much to address, such as the risks and issues in the stablecoin sector. It is without a doubt that the crypto industry will see continued strong growth of the stablecoin sector, thereby driving meaningful adoption.

This article was co-authored by Harper Li and Johnson Xu.

Harper Li is a blockchain and big data lover with a background in quantitative finance. She is currently the senior analyst at TokenInsight, a company that provides investment research, ratings, data analysis, industry insights, investment management services, industry consulting and other services.

Johnson Xu is a devoted fintech professional with a background in finance and computer science and substantial exposure to the cryptocurrency and blockchain industry. He is currently the chief analyst and leads research initiatives at TokenInsight, a company that provides investment research, ratings, data analysis, industry insights, investment management services, industry consulting and other services. His previous experience includes a global, top-tier cryptocurrency exchange and a Fortune 200 consulting company.