Ethereum Hard Forked into Istanbul. What Does Ii Mean and has it Affected ETH’s Price?

Surely Ethereum likes to choose the name of beautiful cities for their systematic upgrades or hard forks, how they are generally denominated.

A network upgrade is a change to the Ethereum protocol, creating new rules to improve the system. This is the 8th occurred in the life of the second-largest cryptocurrency in terms of market cap, which will see its significant improvement in 2021 with the shift to the proof of stake consensus.

These new rules that in Ethereum become Ethereum Improvement Proposals (EIPs) define in technical terms the changes and features that should be implemented in a network upgrade and typically add features requested by users and developers of the protocol. They describe standards for the Ethereum platform, including core protocol specifications, client APIs, and contract standards.

A ‘hard fork’ denotes a network update which is not fully backward compatible, and has the potential to make some previous transactions invalid, and/or change the existing functionality of deployed contracts.

To clear any confusion, a network upgrade does not mean that you will suddenly end up with more coins. When other hard forks brought magical free money, it happened because there was no consensus between the parties (like when BCH parted from BTC or BSV from BCH).

In Istanbul, all miners and nodes involved agreed on the improvements; they are therefore creating a new chain and break with the previous one. Still, there’s no need to create a new token or coin because they have unanimously agreed to the changes.

The decentralized nature of blockchain systems makes a network upgrade more difficult. Network upgrades in a blockchain require cooperation and communication with the community, as well as with the developers of the various Ethereum clients for the transition to go smoothly.

If you are using an Ethereum client on these networks and choose not to upgrade your client to the latest version, you will be stuck on an incompatible chain following the old rules. Your client will sync to the pre-fork blockchain, and you will be unable to send ether or operate on the post-upgrade Ethereum network.

Given how much the community has grown in the past year, this upgrade was the largest in terms of community proposals in the history of Ethereum, with over 30 EIPs that were proposed for inclusion in this fork. Each was discussed and debated and after much consideration, six EIPs were considered suitable and ready to be implemented as part of this upgrade. You can view them all here: https://eth.wiki/en/roadmap/istanbul

In terms of Ethereum’s price action, over the past several weeks, it has been closely related to Bitcoin’s, with a dip into the lower-$150 region, which is where it has been able to find some levels of support.

Ethereum’s much-anticipated Istanbul hard fork hasn’t affected the cryptocurrency price so far as it appears that investors are not too excited by this latest development, and sellers remain firmly in control of the cryptocurrency. 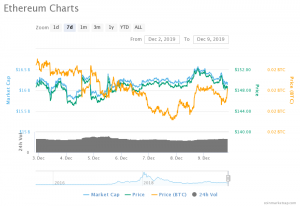 At the time of writing, Ethereum is trading at $148, a slight climb from its recent lows of $146 while a key resistance level is $152, which will probably be retested if Bitcoin price begins moving towards its near-term resistance level at $8,000.