Ethereum ‘Flippens’ Stablecoins to Become the Most Used Blockchain 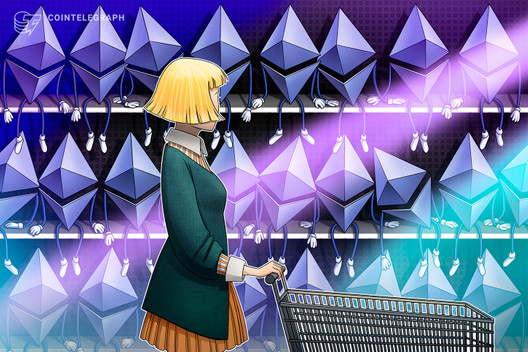 Increasing stablecoin use and the rise of DeFi has made Ethereum the most used blockchain.

For the last month Bitcoin (BTC) price has traded in a tight range and trading volume has been relatively flat. Meanwhile, several tokens on the Ethereum network have been topping the price charts, especially the Decentralized Finance (DeFi) tokens.

New data from Messari shows that Ethereum has just surpassed Bitcoin as the network that settles the most value per day. This means that the dollar value on the transactions of both Ether (ETH) and its tokens is now higher than that of Bitcoin. 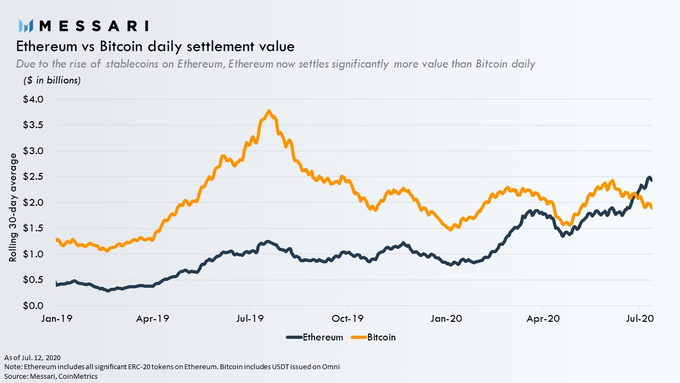 While the DeFi sector has been gaining popularity, stablecoin transactions have been responsible for most of this volume, having settled over $508 billion in transactions over the course of 2020. This figure is nearly double the $253 billion settled in 2019.

Tether (USDT) is the main stablecoin responsible for the volume and according to Messari, it could possibly surpass Bitcoin as the most transacted cryptocurrency in the market. 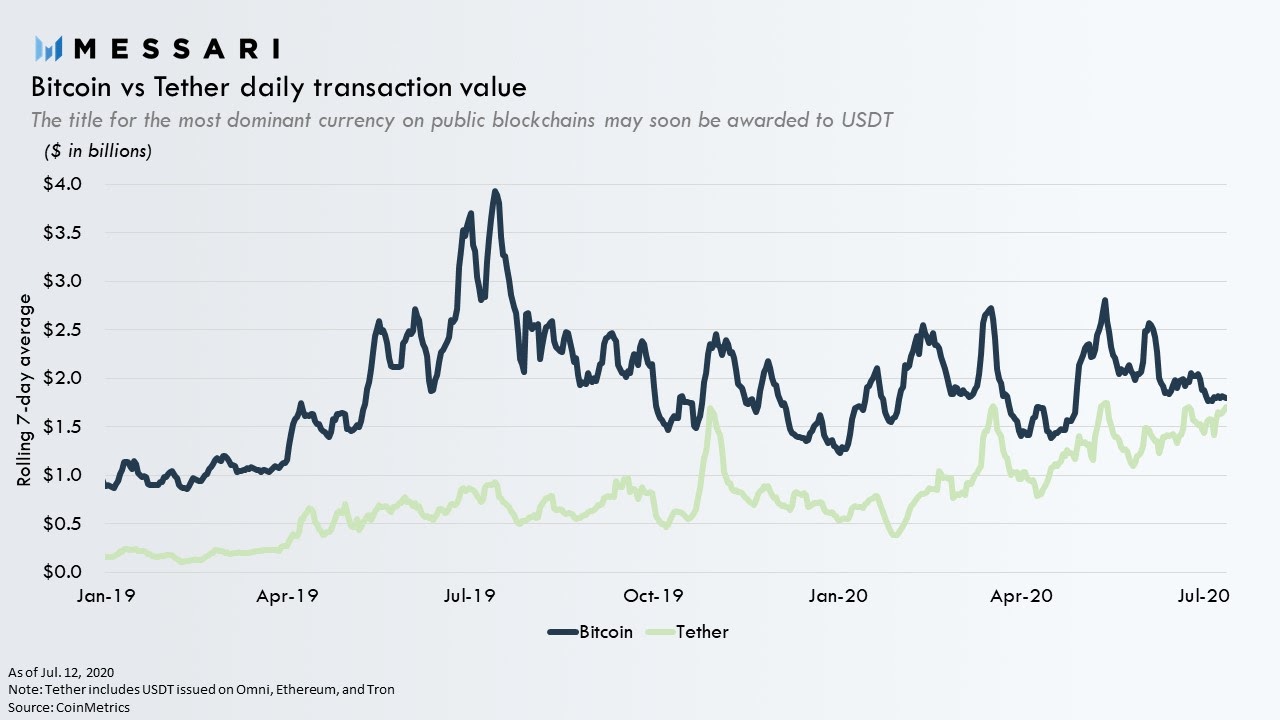 Bitcoin offers colored coins through protocols like Counterparty and Omni, but these assets pale in comparison to the smart contract capabilities of the Ethereum network, which continue to be showcased through the novel possibilities of DeFi. Coupled with lower fees and faster transaction times, Ethereum has become the chain of choice for centralized and decentralized stablecoins alike.

While USDT was first issued on the Bitcoin blockchain, only 13.2% of its supply currently resides on BTC, while the Ethereum chain holds 59.8% of the USDT supply. As most of the USDT balance is held on Ethereum, USDT is also the biggest spender of gas in the network, according to data from ETH Gas Station.

Led by USDT, the collective stablecoin market capitalization grew from $2.4 billion to around $8 billion in Q1 alone. Another $3.8 billion was added in the Q2, making the current figure over $12 billion, and approximately $9.18 billion belongs to Tether. Tether has also surpassed Ripple (XRP) as the third largest cryptocurrency. 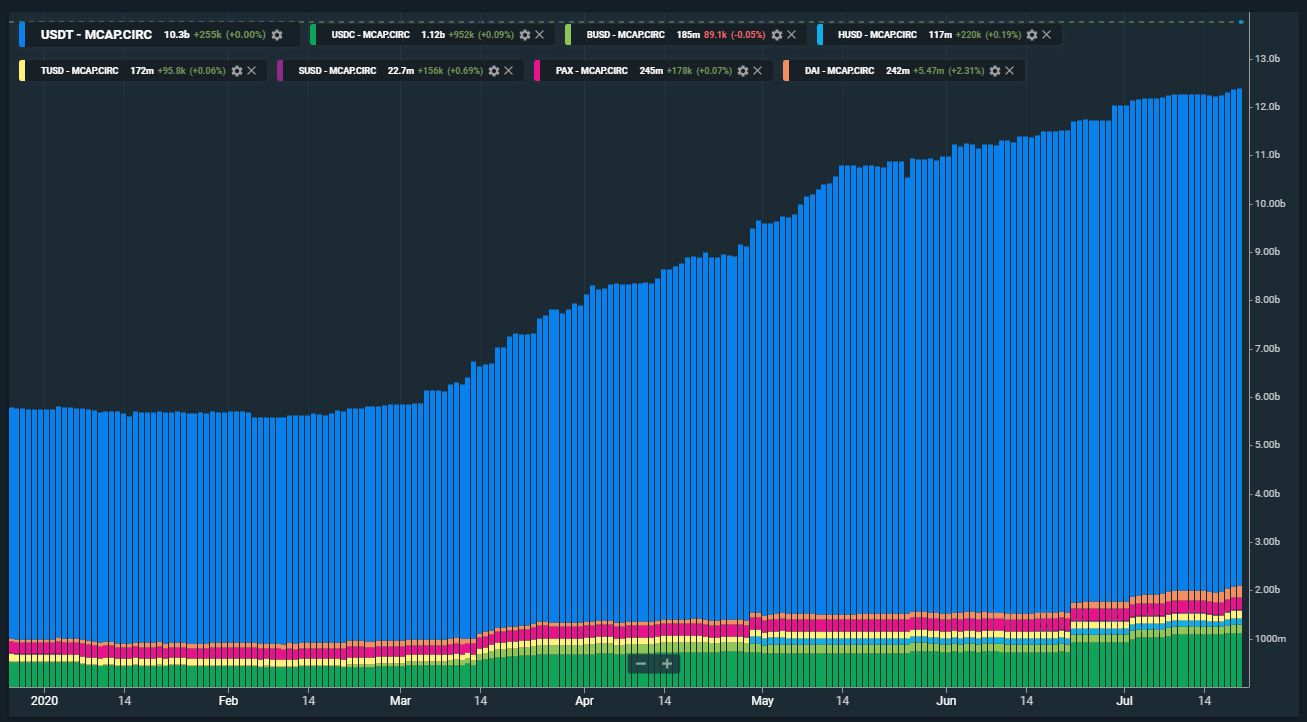 DeFi is driving demand for stablecoins

While inter-exchange settlement is the most popular use for stablecoins, DeFi has also been a considerable force in the growing activity seen on the Ethereum network. Because of their peg to fiat currencies, stablecoins are quite popular among DeFi lending protocols which have been gaining traction throughout 2020.

The platforms have seen noticeable surges in the amount of funds locked and in Q2 the figure surged above $2 billion. Compound alone achieved a major milestone with over $1 billion assets borrowed in total.

Has Ethereum bitten off more than it can chew?

Stablecoins and growth within the DeFi sector are likely to continue driving transaction volume and settlement value on the Ethereum network but will the network be able to support this growth?

Stablecoins already account for more than 70% of the total daily value settled and if the Ethereum network continues to have unresolved congestion and scalability problems there could be real problems within the DeFi platforms.

For the time being, it’s unclear whether or not the Ethereum Network will be able to deal with the rapidly increasing stablecoin and DeFi activity, especially as corporations set their sights on the sector.