Ether Rockets 50% in 5-Year Anniversary Month: What’s Behind the Rally? 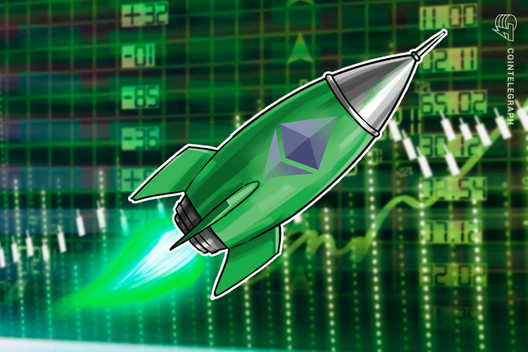 As Ethereum turns five years old, Ether is up 50% over the past month with two main catalysts driving the uptrend, namely DeFi and ETH 2.0.

The price of Ethereum’s Ether token has seen strong momentum in July. Since the start of the month, ETH has climbed by 50% from $225.5 to $340 on Coinbase. It coincides with a five-year anniversary for the dominant smart contracts blockchain protocol.

There appear to be two key factors fueling the rally of ETH. First, the anticipation of the market towards ETH 2.0 has been continuously building. Second, the explosive growth of the decentralized finance (DeFi) market has upheld the momentum of Ethereum. 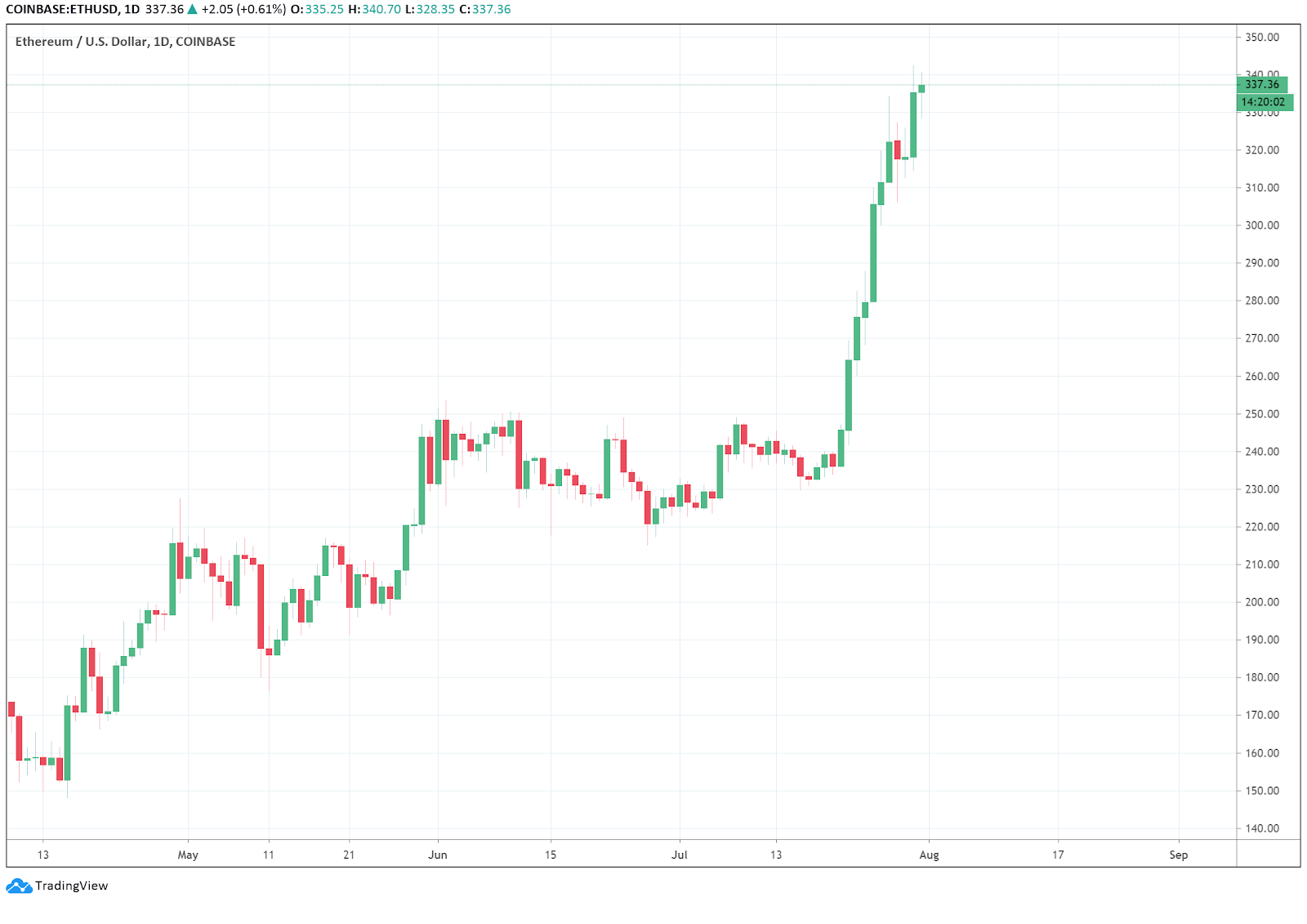 DeFi and its impact on the Ethereum blockchain

Since then, several major DeFi platforms have emerged. According to Defipulse.com, Aave, Balancer, and Curve Finance have $482 million, $291 million, and $263 million locked in, respectively.

Consequently, the total value locked in the DeFi space has increased to $3.94 billion. It is up by more than three-fold since the beginning of June.

The upward trajectory of the DeFi market could positively affect Ethereum for various reasons. The most prominent factor is its usage as gas. When users clog the Ethereum blockchain with many transactions, ETH is needed to pay transaction fees or “gas.”

According to Etherscan, the amount of gas used per day has increased to a new all-time high at above 76 million. The data suggests the demand for ETH is increasing in tandem with the user activity of the Ethereum blockchain. 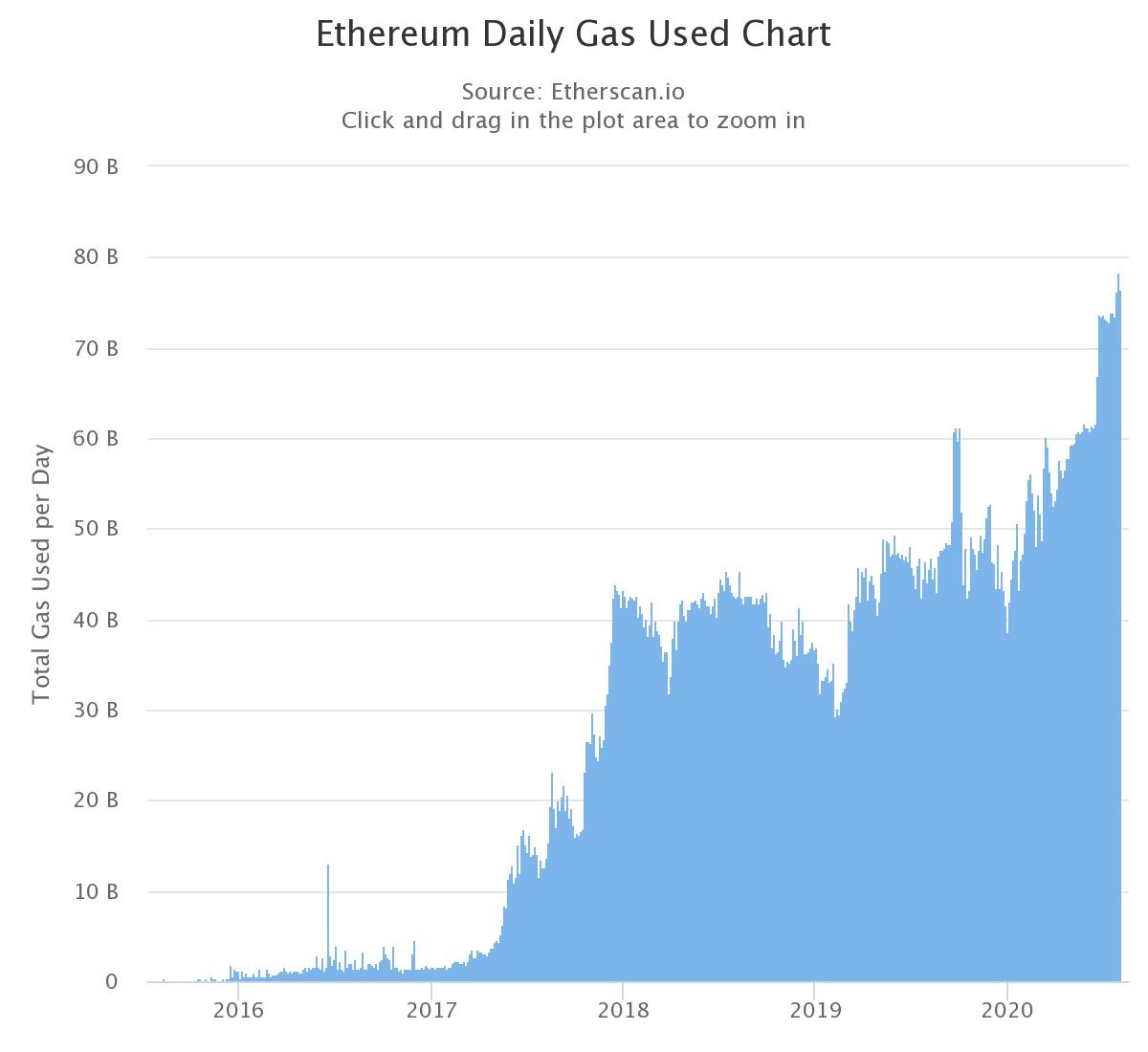 But some experts are skeptical about the sustainability of the DeFi market. Vitalik Buterin, the co-creator of Ethereum, said on the “Unchained Podcast” on July 29 that yield farming is not sustainable. He said:

“And those guys are not going to just keep on printing coins for people to, to entice people, to get into their ecosystems forever. It’s a short-term thing. And once the enticements disappear, you can easily see the yield rates drop back down to 0%.”

Arguably the biggest catalyst around Ethereum in the first half of 2020 was ETH 2.0. In simple terms, ETH 2.0 incentivizes users that participate in Ethereum as it switches to the “proof-of-stake” consensus algorithm.

The PoS algorithm would eventually eliminate miners from Ethereum, primarily to optimize and fasten the network. The final testnet of ETH 2.0, which is called Medalla, is expected to launch in August.

Afri Schoedon, the fork coordinator of ETH 2.0, said on Github:

“Before such a mainnet can be launched, we need testnets that mimic mainnet conditions as good as possible… The Schlesi testnet was one of many steps in that direction. The Witti testnet was another. The Altona testnet is yet another. The Medalla testnet aims to be the final one prior to mainnet launch.” 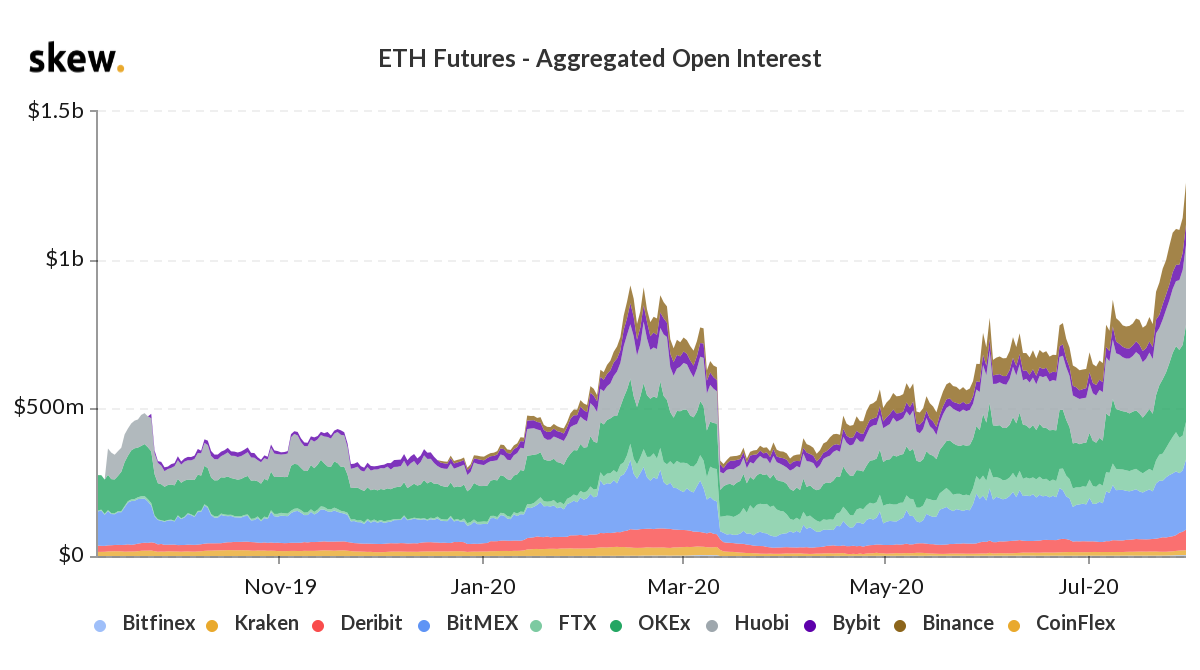 Meanwhile, ETH futures are also gaining tractions among traders with total open interest climbing to a new record high in July after recovering since the March crash. As ETH 2.0 nears, the demand for Ether could continue to soar, given that it rewards users for staking their coins. The confluence of rapid growth in DeFi and anticipation of Ethereum 2.0 is presenting an optimistic outlook for Ether price.