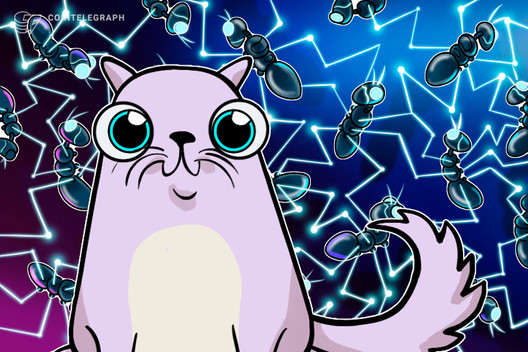 The famous English rock band Muse is teaming up with Dapper Labs, the company behind the viral blockchain game CryptoKitties.

The collaboration, which follows Dapper Labs’ partnership with Warner Music Group, will center on the creation of two blockchain-secured crypto-collectibles, including a limited edition Kitty “signed” by the band.

Projects such as CryptoKitties involve unique but tradeable blockchain assets — known as non-fungible tokens — that can be used to represent all manner of virtual and equally, real-world goods.

Video games, digital art and even memes can be tokenized and monetized, circulating on the blockchain in a peer-to-peer community of online fans.

The new edition of collectible Kitties will be designed using elements from the visual world that Muse created in their latest album, “Simulation Theory.”

Two characters featured in the new collection will be “Marty” and “Mibbles” —  the former based on lead singer Matt Bellamy’s incarnation in the “Something Human” video and the latter a mini-monster heralding from the video for “Pressure.”

Speaking of the new project, Dapper Labs’ CEO Roham Charegozlo claimed that blockchain-based collectibles have the power “to transform the artist fan relationship” —- an idea echoed by a Warner Music executive, Tiago Correia, who said:

“As our lives become increasingly digitized, people are expressing their fandom in new and fascinating ways. For some, the concept of a purely digital item is still unusual, but for many fans who love engaging with stickers and filters, these items are just another tool for self-expression.”

In recent years, Muse has notably made a feature of new technologies in their rock spectacles and tours for albums such as “Drones” and “Simulation Theory.”

As previously reported, Dapper Labs — notorious for causing unprecedented network congestion on the Ethereum network when CryptoKitties first launched on its mainnet — recently announced the parallel launch of the game on its “Flow” blockchain.

In an interview with Cointelegraph, Charegozlo said that the impetus behind Flow was to establish a “high-throughput environment” for non-fungible tokens.

During 2019, CryptoKitties had generated over 2 million transactions — the highest among any consumer decentralized application on Ethereum.