The European Central Bank (ECB) marked international youth day by posting a video of its president, Christine Lagarde, inviting young people to help guide the future of the Euro.

Tweeted from the ECB’s official account, the video features Lagarde explaining how the central bank is the custodian of something that “belongs to you”. She continued,

“we want to invite you (young people) to participate in the policy debate that we have.”

The debate Lagarde references is about how to best guide the monetary policy and future price stability of the Euro. The video also includes her running through a series of questions,

“well, what matters is the Euro, banknotes, or digital currency? What about climate change and does it impact price stability? What matters is fiscal policy, working hand in hand with monetary policy? How will that be managed in the future? That’s your future.”

Together with President @lagarde, we are joining @UN4Youth and @UNDESASocial on International #YouthDay to celebrate young people and your contributions to policymaking. We want to encourage you to have your say in shaping the future of the euro. Here’s how

The video concludes with Lagarde making a call to action, and giving a plug for a portal called “ECB listens” where people can “comment, share opinions and influence the debate.”

The video was met with a significant amount of skepticism. Twitter responses to the clip showed a predictable level of hostility, with many people voicing support for Bitcoin. 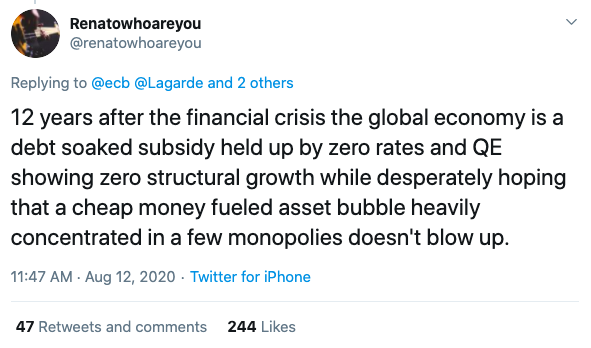 Depending on your viewpoint, the ECB video can be seen as a nice gesture, harmless, or insincere and manipulative. However, it may also mark the beginning of a period where central banks are forced to take more action and perhaps push back against decentralized currencies.

The ECB has long considered creating a digital version of the Euro. Pressure from the COVID-19 pandemic has forced a deeper examination of a continent-wide CBDC.

Notably, the French central bank has already tested the digital Euro in a real-world transaction with Société Générale and is now expanding to other partners. A number of other countries are not far behind. China’s central bank just tested digital wallets intended to support its digital Yuan.

The central bank of the Philippines, too, is set for a CBDC trial run and the Japanese government is expanding its CBDC research efforts by announcing a new digital payments director.

Some have theorized that the “coming digitization of money,” which includes the launch of CBDCs, could create a “secular tailwind” for Bitcoin. However, this remains an untested hypothesis. Others see a less cooperative future.

As the dominant structures that countries use to manage their economies, central banks have singular power, which they are unlikely to give up without a struggle.