Do Bitcoin (BTC) Miners Have Power over Price? 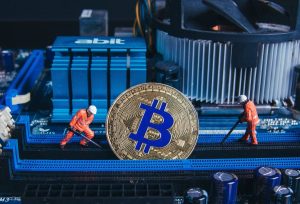 Contrary to popular belief, a new study seems to conclude that Bitcoin miners command just but a tiny percentage of all BTC selling power to influence price and that there is no meaningful correlation between outflows to exchanges and prices.

For their role, Bitcoin miners keep the network secure and because of their heavy investment, successful miners are rightly incentivized for funneling their hash power. For every block that is mined, the successful mining pool gets 12.5 BTCs, or roughly $90,625 at current spot rates and transaction fees associated with that block. This is a lucrative business that has been inevitably industrialized.

Per Satoshi’s design, the number of coins rewarded will continue to drop until all 21 million coins are mined. Thereafter, participating miners will only earn transaction fees. The question in everyone’s mine is whether BTC’s prices will be high enough to attract miners seeking profits.

And understandably, like in all Proof of Work systems, mining coins demand electricity and investing in the latest efficient gear for profitability. Even if electricity costs are low and deployed gear is the up-to-date but prices are suppressed, mining would be futile, and therefore unattractive.

Since Bitcoin supply is inelastic and regardless of hash rate-demand, only a preset amount of BTCs will be released into the ecosystem within a given period, it is imperative that prices remain high enough for processes to be sustained.

MSV: Impact of Miner Liquidation on Price is Low

Miners, being sensitive to price, were earlier blamed for liquidating their coinbases–every after 100 confirmed blocks, and subsequently driving prices lower. But now, it has been discovered that their liquidation impact on BTC price is too low, near negligible, according to Miner’s Share of (on-chain) Volume (MSV). The MSV relates on-chain volumes and mining output, and how the former diminishes over time.

This study is quite startling, and although the authors have a clear disclosure explaining that their data samples may not be representative and the “analysis probably accounted for 1–5% of all actual miner outflows,” their effort to dive deeper and reveal the lack of positive correlation—and therefore causation, between BTC outflows and price returns may be highly probable, even conclusive.

“After (1st-order) differencing the series, and checking for stationarity, we sought after meaningful relationships between any of the mapped pools’ moves and bitcoin’s prices. The correlation coefficient for both series studied reveals no meaningful relationship with price returns. A p-value of 0.062 indicates a ~94% probability that the very slightly negative correlation is not a product of chance.”

In November, it was widely reported that weak miners were beginning to capitulate following the temporary dip below $7,000. BTC has since recovered, steadying at $7,250.

The post Do Bitcoin (BTC) Miners Have Power over Price? appeared first on Coingape.