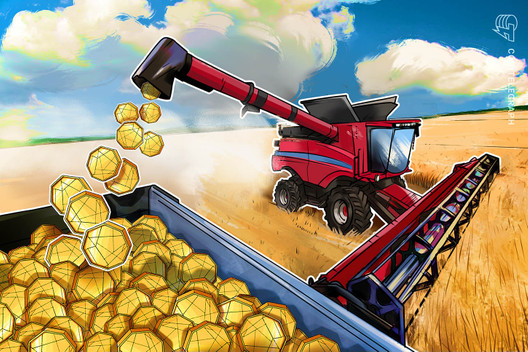 Three years on from the initial coin offering mania of 2017, decentralized finance is the new hype. Spurred on by the promise of high annual gains, traders appear to be sowing heavily in crypto’s latest yield-generating arena that is DeFi. Projects in the early days of crypto seemed to focus on payments and finance in general; however, entrepreneurs began expanding the utility for blockchain technology into other use cases with varying degrees of success.

With DeFi, an argument can be made that crypto is returning back to the promise of democratizing finance. By eliminating the need for traditional gatekeepers, global financial inclusion can reach a more diverse demographic.

Amid the growing popularity of yield farming, also called liquidity mining, some industry observers say the trend is only a fad that will inevitably slow down, while DeFi proponents argue that rising prices are irrelevant and that the focus should instead be on the robust financial systems being created.

DeFi lending protocol Compound kicked off the yield farming frenzy back in June. At the time, the project introduced a new token distribution mechanism that rewarded liquidity providers with COMP, a governance token for the Compound platform that gives tokenholders the ability to vote on protocol-level issues affecting the project. In no time, the price of COMP rose meteorically, ushering the current yield arbitrage gold rush.

As of the time of writing, Compound’s total value locked (TVL) is over $770 million, according to data from DeFi analytics tracker DeFi Pulse. In mid-June, this value was about $100 million, indicating that the project has grown almost eight-fold in barely a month. 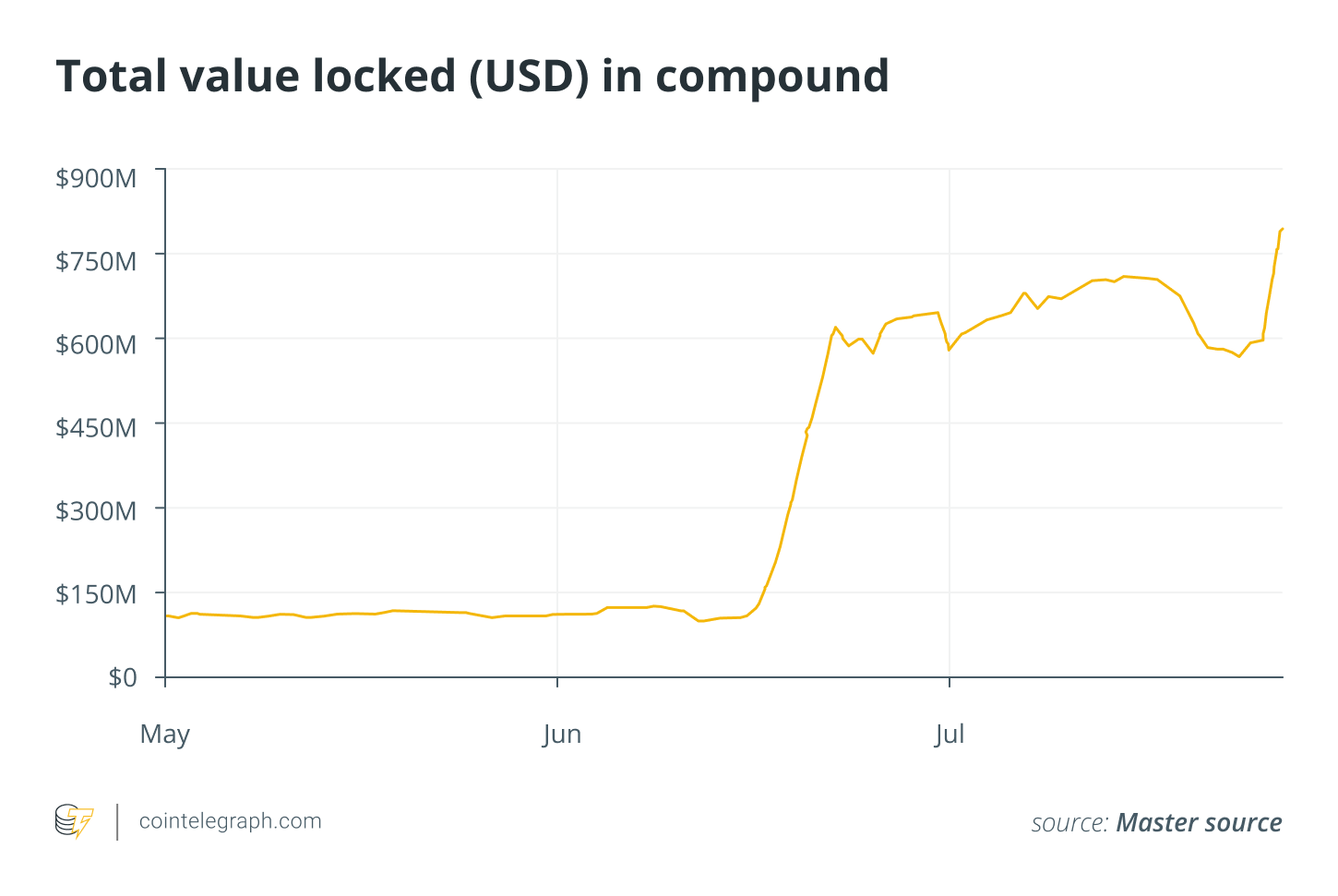 Apart from providing percentage yields and governance tokens for users, liquidity mining creates a positive use loop for DeFi protocols. Usability has often been the bane of DApps, with projects unable to retain their customers beyond a certain timeframe. With yield farming, however, lenders and borrowers can earn incentives for participating in the market. Thus, it has become common to see investors deposit tokens, borrow other coins and move their positions across different markets, depending on the arbitrage opportunities available.

Yield stacking has become the latest iteration of the liquidity mining process whereby investors borrow from one platform and deposit in another project multiple times to increase their overall gains. Stacking yield is also allowing traders to earn several governance tokens from their expanded portfolios.

In its recently published “2020 Q2 DeFi Industry Research Report,” TokenInsight reveals that whales have earned over half of the COMP mining rewards. Also, the report indicates that centralized lending platforms are getting in on the liquidity mining action as well, with Nexo having deposited over $60 million in the stablecoin Tether (USDT) to farm COMP governance tokens.

DeFi startups like Instadapp are even creating tools that streamline the yield stacking process to allow investors to efficiently utilize their trading capital. Given the low float of these governance tokens, it’s perhaps unsurprising to see them experiencing substantial price gains.

The expiration of the distribution phase of tokens like COMP might alter the current economics of the yield farming market. Investors apparently aware of this reality are no doubt looking to be first-movers in this new arena and reap the benefits that accrue for traders who front-run any prominent niche in the crypto space.

Thus, it is most likely that market participants who missed out on the initial gains for projects such as Compound and Balancer will be on the lookout for the next project to kick-start its own liquidity mining phase. The likes of Ren, Synthetix, Curve and even flash loan platform bZx are thought to have liquidity mining plans in the pipeline. Commenting on the difference between the current yield farming buzz and the ICO mania of 2017, Johnson Xu, head of research and analytics at crypto analytics platform TokenInsight, remarked:

“I believe the DeFi yield farming craze is fundamentally different compared to the 2017 ICO craze. In the short term, the high-interest rate and the incentivized liquidity mining mechanism has created a hype in the space which directly pushes up the DeFi market, resulting in a speculative push in the DeFi space. Without any further applications and use cases to be created in order to accrue meaningful value within the space, we believe the recent DeFi hype could be short-lived.”

For Xu, the significantly higher entry barrier into the DeFi space compared with the 2017 token sale era will incentivize efforts geared toward robust market development in the former. While the current euphoria might echo the “pump and dump” cycle common in the ICO space, DeFi participants appear to be working toward creating tangible value for the industry as a whole.

Stani Kulechov, CEO of DeFi lending protocol Aave, also echoed Xu’s sentiments, highlighting the fact that the current high yields are incentivizing greater participation. Commenting on how the yield farming hype differs from the ICO craze, Kulechov told Cointelegraph: “2017 was different in the sense that people were throwing funds into anything, whereas in DeFi you cannot be DeFi without having such characteristics such as non-custodial protocol.”

The curious case of yEarn

To buttress the earlier point about investors being on the hunt for the next liquidity mining opportunity, consider the case of yEarn, a yield aggregating protocol developed by Andre Cronje. As previously reported by Cointelegraph, despite Cronje warning that its YFI governance token was of little value, investors still flocked to the platform, triggering a single-day price run of 4,000%.

YFI was even listed on the automated market maker platform Uniswap. As of the time of writing, data from crypto market monitor CoinGecko shows YFI listed on exchanges such as FTX and Poloniex. Worth $30 upon the project’s launch, YFI token price surged to $4,661.97, an increase of about 15,400% in barely a week. Cronje told Cointelegraph: “I was not expecting this at all.”

Investors earn YFI tokens by providing liquidity to a suite of projects under the aegis of the yEarn protocol. The system functions as a market monitor that provides information about the DeFi protocols offering the highest yield, updated in real time.

According to an announcement published on July 24, yEarn is set for its “version 2” roll-out in the next couple of days. As part of the announcement, the project said the update will solve issues concerning the rigid nature of the first iteration. The second version of yEarn will comprise three main components: yVaults, controller and strategies. With yVaults, investors will be able to track the share of their tokens in any liquidity pool.

The other two components — controllers and strategies — allow traders to create a subset of governance protocols aimed at obtaining the highest yield in the market and maximizing returns with as little capital loss as possible. According to the announcement, yEarn v2 will eliminate entry barriers to investors with relatively small capital exposure, stating: “The system is designed to be gas efficient for small yield farmers, allowing deposits and withdraws as low as ~$2 even at 100 gwei.”

Is yield farming a problem for DeFi?

The hype surrounding liquidity mining on Compound saw the project briefly overtake Maker as the largest DeFi protocol by TVL. Currently, yEarn is the ninth largest, ahead of others such as dYdX and Uniswap. Given the nature of the mania surrounding crypto’s new yield-generating machine, some pundits are drawing parallels with the ICO craze of 2017. If liquidity mining is the new ICO, then TVL is the new market capitalization in that its growth creates an initial positive loop that spurs further participation from investors.

However, the increase in TVL in the first instance is due to investors banking on the promise of high annualized yields from providing liquidity to these DeFi protocols. As long as governance token prices continue to increase, traders seem incentivized to keep on lending and borrowing, stacking yields in the process.

It took 20 days from the total DeFi TVL to move from $2 billion to $3 billion. In less than a week, the DeFi market is already 57% of the way from the $3 billion mark to the $4 billion valuation mark. With such accelerated growth comes concerns over whether the DeFi market is battle-tested enough to handle stresses on it. Responding to this question, Cronje opined:

“The Defi market has this interesting concept where you ’vote’ with your funds. So, you ’vote’ for the protocol you think is safe with your LP funds. The onus is shifting to the owner of the funds and away from the protocol. LPs need to be much more aware of where they are putting their funds. If not, it will be an easy breeding ground for scams, much like the ICO craze.”

For TokenInsight’s Xu, the risk is not an alien concept for crypto participants, adding that yield farming still needs to be tested by the broader market, as there are significant risks around smart contracts and the market in addition to infrastructure failure, among other factors. Xu added:

“I strongly suggest DeFi projects do not jump the gun to simply offer attractive yield farming to attract users and capitals. I think the most important aspects in the DeFi space is to build a solid infrastructure and token economy with a proper incentivized mechanism to create a ripple effect in the industry.”

According to Xu, the growth in the DeFi space is only beginning, as TVL will continue to increase, attracting more investors. As previously reported by Cointelegraph, institutional investors are beginning to turn their attention to the DeFi market.

With investors eyeing high yield potential, Cronje argued that the focus should move toward sustainable gains. Commenting on the potential implication of the current state of the market, Cronje stated: “I know ~10% APR doesn’t sound as good as 1000% APR, but that’s the sustainability. The yield obsession while fun, could cause damage in the long term if not handled correctly.” Aave’s Kulechov also made a similar point about de-risking the DeFi space. In a Tweet published on July 22, he called for an emphasis on “safety farming” where the focus would be on incentivizing activities that do not endanger the stability of the market.