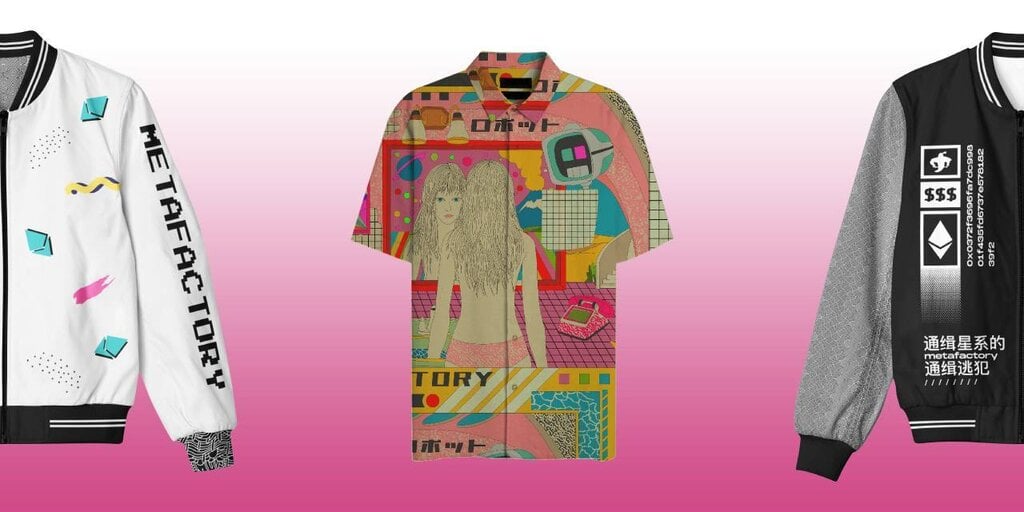 For advocates of decentralization, the movement has the potential to break up monopolies and hand control back to the users. Its impact is already being felt in industries from finance to social media and even Internet access—but what about fashion?

A new wave of decentralized creative collectives are aiming to change the relationship between brands and consumers, empowering a new wave of “consumer-creators” to build their own brands from the ground up.

Their ambitions are grand, but for the time being they’re zeroing in on the fashion industry. MetaFactory is one of the most intriguing players in the space, having launched its DAO-driven “brand factories” concept this past spring and debuting its first efforts on that front.

MetaFactory bills itself as a platform for collectively managed, community-owned brands. The idea is fairly straightforward; designers create their own brands and style guides, while the community gets to suggest and vote on product designs under the umbrella of the brand through a decentralized autonomous organization (DAO), using the DAI cryptocurrency.

Successful designs are produced by MetaFactory, and any profits are shared between MetaFactory and the community-owned brand (and, ultimately, with the community itself).

Decrypt spoke with MetaFactory co-founders Drew Harding and Hammad Jutt to learn about the collective’s big plans for crypto fashion, as well as how the brand factory approach sets them apart from other current decentralized fashion initiatives.

MetaFactory spun off from MetaCartel, a micro-grant funding initiative for promising Ethereum projects, and MetaCartel itself was forked from Moloch DAO. As MetaCartel amassed more and more collaborators, they began to think about incubating projects internally rather than simply awarding grants to others.

How will blockchain change the future of fashion?

“We were at Osaka at last year’s DevCon and just chatting about swag, fashion, and culture, and the power of fashion in driving culture,” Harding recalled. “We were saying how we needed more of that in the crypto space beyond getting the swag shirts that we all get at booths—which is awesome, don’t get me wrong. My whole wardrobe consists of that. But why can’t we do more luxury, contemporary streetwear-style fashion?”

From there, SwagDAO was born, which eventually gave way to MetaFactory following a branding competition within the community. “Coming from the DAO space and framework, we were like: We can take this a step further and actually create a collectively-managed, owned, and governed experience for creating brands.”

Enter the brand factory. Each brand factory—essentially an abstracted name for the DAO and its processes—is a collaboration between MetaFactory and an artist that is then opened up to further participants. MetaFactory recently launched its first collaboration, Wicked Sunday Club, in partnership with Indonesian artist Twisted Vacancy.

@Wicked_Sunday club is here! A collective Brand by TwistedVacancy x @TheMetaFactory ! Yes you can own the brand too! Sign up and access our deck here ; https://t.co/PH1C0nzNiI pic.twitter.com/FbOB7Y15ne

Described as “a new cultural experience,” Wicked Sunday Club lets up to 42 people buy into a membership during this initial season, with over half of those slots already sold as of this writing. Members receive a box of merchandise, including a limited-edition genesis shirt and accessories, along with digital non-fungible token (NFT) drops. More importantly, membership provides access and the ability to help shape and create products within the brand.

Members are granted the Wicked Sunday Club style guide and assets library, along with the ability to create and sell merchandise—and profit, naturally—through MetaFactory’s platform using those elements.

MetaFactory has described its approach as crowdfunding, but there’s a big twist beyond that familiar description: further chipping away at that traditional barrier between creator and consumer, as both become invested in the brand’s success.

Welcome to the future of collective creation.

“Even in the traditional fashion branding and marketing spaces right now, the biggest thing right now is this experiential economy where the consumers feel like they’re a part of a story or part of an experience, and that’s how the most successful brands today operate,” said Jutt. “It’s not about billboards or anything like that anymore. It’s about creating an experience in which people feel a part of something or part of a community. It gives them a sense of belonging.”

“It’s not about billboards anymore. It’s about creating an experience in which people feel a part of something.”

Thanks to Web 3, Jutt continued, “now we have the tools to actually enable them to be invested and share in the success of a brand. In community-owned and operated brands, the people who are the consumers can also take part in the production of these things.” The result, he says, is a “powerful ecosystem” that blurs the lines between producer and consumer.

DAO with a twist

Wicked Sunday Club membership pricing began at 1.85 ETH and has grown at a rate of 0.05 for each subsequent slot sold, with the initial season campaign running through September. “This pseudo-FOMO styled price appreciation takes the best elements of favoring early adopters without punishing the last participants with outrageous price multiples,” reads the launch blog post.

Wicked Sunday Club, it stresses, “is not meant to be treated as a flip.” Those who are most active in the conversation around the brand get access to perks including governance shares and profit-sharing, while more passive members still get access to custom goods.

Harding explained that distinction further to Decrypt, stating that all members are offered referral benefits without a spot directly within the DAO. Members who are consistently participating, proposing product ideas that are voted upon, and helping to build up the brand may be invited to join the DAO and core brand team—like a vetting process, he said.

“We as MetaFactory are really acting as the guide,” he said of the brand factory concept. “We’re laying the foundation at a technical level and at a cultural one. It’s interesting because although it’s DAO’d, by the nature of apparel creation there are major centralized aspects. We’ve taken steps from a DAO design standpoint to do something completely custom and specific to MetaFactory’s needs in collaboration with the Aragon team.”

Currently, MetaFactory handles all production and fulfillment of physical goods within brand factories, but if a brand eventually wants to break free and handle its own production, Harding said that there are mechanisms in place to allow that. Additionally, he told Decrypt that they’re already looking at ways to decentralize production, “truly disrupting the current supply chain inefficiencies and exploitation.”

MetaFactory isn’t the only player in the decentralized brands space, though. Zora is one marketplace that’s been making waves, catching attention for selling a limited-edition cassette tape album from Grammy-winning musician RAC.

Zora’s larger ambitions for “Internet-owned brands”—including fashion brand Saint Fame—sound similar to what MetaFactory is proposing, although a Zora representative did not respond to Decrypt’s questions after agreeing to an interview.

Redemptions have been enabled for $ICK.

Redeem exactly 1 $ICK and you will be sent one physical Saint Fame Mask, shipped anywhere in the world.https://t.co/plKN1sDiod pic.twitter.com/p0X2ALkBXi

Another platform, Foundation, dubs itself “culture’s stock exchange” and currently has crypto-themed t-shirts from Neue Goods, as well as multimedia artwork from Signe Pierce. And then there’s Unisocks, which focuses on, well, socks.

Many of these crypto fashion plays are built upon a token-driven model that invites speculation, with companies attempting to sell limited-edition physical products with a price tied to a bonding curve. Customers purchase a token that can eventually be redeemed for the finished product, with the price climbing with each subsequent purchase.

“We like that approach and we think there’s a valid place for it,” said MetaFactory’s Harding, “but we didn’t want to also just create another token speculation situation. We actually really wanted to create products and reward the artists creating them.” MetaFactory argues that its own approach is focused on producing a tangible product with artists, letting members contribute to the creation of products, and finding compelling ways to merge the physical and digital.

Bringing physical and digital fashion together

While physical products are core to the whole concept of brand factories, they also see big potential in a hybrid digital/physical play. For example, the Wicked Sunday Club membership comes with digital NFT items, but Harding said they’re also exploring the idea of embedding an NFC-like tag within apparel that would let buyers verify ownership on the spot, thus unlocking access to wearable versions in online games or interactive experiences.

Introducing: Tokenize all the Things

It would also allow buyers to track the pedigree and ownership of an item. “It’s kind of like a CarFax for your jacket,” said Harding. “JacketFax.”

“It really brings a whole new level,” added Jutt, “especially with the timing of COVID happening with all of this crazy stuff happening in the AR and VR spaces. There’s this huge push towards the digitalization of culture and experiences, and people’s identities and personalities online.”

“There’s this huge push towards the digitalization of culture and experiences.”

And while fashion is the first product of the brand factories, other items will follow—such as music, as we’ll apparently hear very soon. At this point, some of the details still feel fluid as MetaFactory refines its approach and figures out which ideas work and which don’t. But with Wicked Sunday Club officially launched, the brand factory is no longer conceptual, and the founders see a wealth of potential ahead.

“I definitely anticipate some brands will be more active than others, membership-wise. Some brands might find success before others, some might kind of fizzle, and some might really take off,” said Harding. “I think the real goal is to help to show people that this is a possibility, and something that can be done beyond just apparel and fashion as well. We’re taking a very slow approach in terms of finding the right artists to collaborate with.”