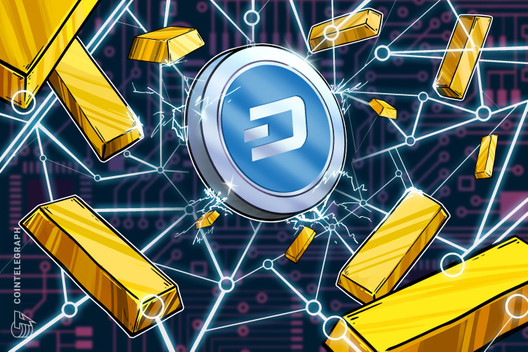 Dash Investment Foundation has launched a Dash-to-gold rebalancing strategy in order to grow its gold and Dash reserves, while reducing volatility.

The Dash Investment Foundation (DIF), which claims to be the first ownerless and memberless investment fund in the world, recently bought its first shipment of physical gold.

This move, announced June 12, marks the launch of its Dash (DASH)-to-gold rebalancing strategy before it is deployed to blockchain startups. The strategy aims to grow the value of the capital held by the DIF.

The rebalancing strategy was devised by Demelza Hays, DIF’s Investment Consultant and alumna of Forbes 30 under 30. The goal is to accumulate more Dash and more gold through rebalancing the two uncorrelated assets.

The completion of this first buy order, from an initial tranche of six, marks the beginning of a long-term actively managed rebalancing strategy using buy and sell triggers.

However the Foundation only invests capital into the rebalancing strategy when it would otherwise be sitting idle. The DIF allocates 10 percent of the Dash block rewards through the network’s self-governing treasury system, with a mandate to make money.

It has a further mandate to support the Dash network, so these funds are distributed to blockchain startups in the forms of loans or investments. Any project can pitch for funding which then goes through a two stage process before being put to a final decision by masternodes.

While the capital is waiting to be deployed, the rebalancing strategy is supposed to ensure that it keeps growing. But the profits from either strategy or investment are put to the benefit of the network, as Hays explained to Cointelegraph:

“Any money made on our investments can be used to buy Dash off of the open market, which we then burn. Burning Dash reduces the supply, and theoretically should increase the price of the Dash. This is one way the Foundation can give back to the community without having an ultimate beneficial owner.”

In a recent investor call, Dash announced that it had seen commercial payments more than double on the network with the help of new retail partnerships in Latin America. It also confirmed a Q1 2020 price increase of almost 60%, its best quarterly performance since Q4 2017.