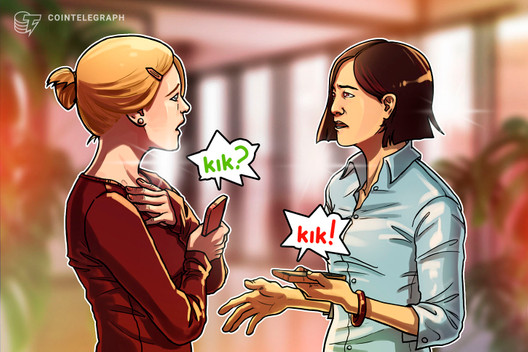 Kik and Solana may be trying to keep damaging allegations hidden from the public.

Cointelegraph contacted the moderators of both subreddits on June 22, but received no explanation.

Kik is in the midst of a sex trafficking lawsuit

Removeddit is a content retrieval service that caches Reddit posts before they are removed. We can see here that mods removed a linked court document outlining the lawsuit.

The nature of the lawsuit is that Jane Doe — a minor at the time — fell victim to sex trafficking by way of Kik’s online chat platform in August 2005. At the time, Jane Doe’s father found several conversations that his daughter had with at least 13 adult men through Kik. In these conversations, the minor sent sexually explicit videos and pictures of herself through Kik.

According to the plaintiff, Kik — a chat service largely targeting teenagers — is widely used by sex offenders to commit child abuse.

The document cites a 2017 Forbes article which quotes a convicted child molester say that Kik is a “predator’s paradise.” One registered sex offender was a member of over 200 Kik groups — with names such as kidsnbabies — dedicated to abuse of children from three to 12 years old. The content posted in the groups included photos and videos.

The lawsuit mentions the Kin cryptocurrency

The document also mentions Kin, Kik’s beleaguered cryptocurrency, which allows users to access premium content such as sticker packs. The firm sold over half a trillion Kin tokens to investors during an initial coin offering in September 2017. In total, they raised around $100M.

The United States Securities and Exchange Commission filed a lawsuit against Kik over the offering, claiming that the firm sold unregistered securities. As Cointelegraph reported in May, the litigation may soon be coming to an end, with both parties seeking a summary judgment.