Undeniably, Litecoin (LTC), Bitcoin Cash(BCH), EOS and Binance Coin (BNB) made impressive moves over the week but are retracing from the recent highs having reached the overbought regions of the markets. At the same time, the coins could be primed for a fresh market uptrend.

LTC/USD Major Trend: Bullish
On February 13, the bulls took the price to a high of $84. At the recent high, Litecoin reaches the overbought region of the market. In that region, buying has been overdone. Automatically, sellers emerge to push LTC downward to the low of $77. The bulls retest the previous high of $84, and the resistance was firm as the coin dropped to the low of $68. 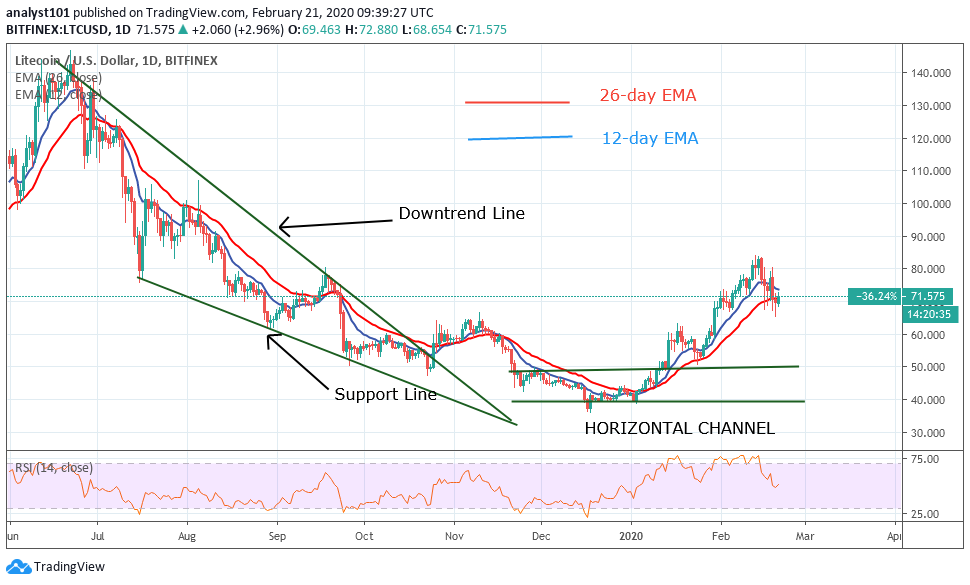 Nonetheless, it appears the more the bulls push the coin upward, the more equitable resistance they face. LTC is currently trading at $72 at the time of writing. LTC is trading at level 48 of the Relative Strength Index. It indicates that the coin is in the downtrend zone. Also, it is below the centerline 50. 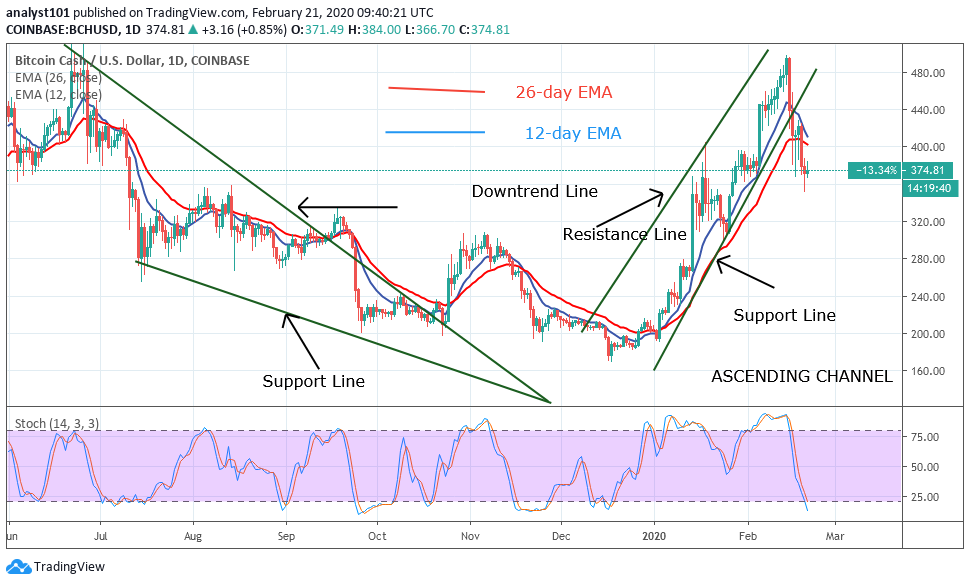 The $360 support is the breakout level point. If it holds, the price will rise to revisit the previous highs. Meanwhile, BCH is below a 25% range of the daily stochastic and approaching the oversold region of the market. This indicates that the coin is in bearish momentum. Nonetheless, if the coin falls into the oversold region the bearish momentum becomes stronger. It means that BCH is likely to further depreciate.

BSV/USD Major Trend: Ranging
Bitcoin SV has remained in a sideways trend after the price rallied on January 13. It has also remained range-bound between the levels of $240 and $360. The pair lacks buying power at a higher price level. The recent upward move after the price rally was interrupted at $360 as the coin fell and traded below $320. 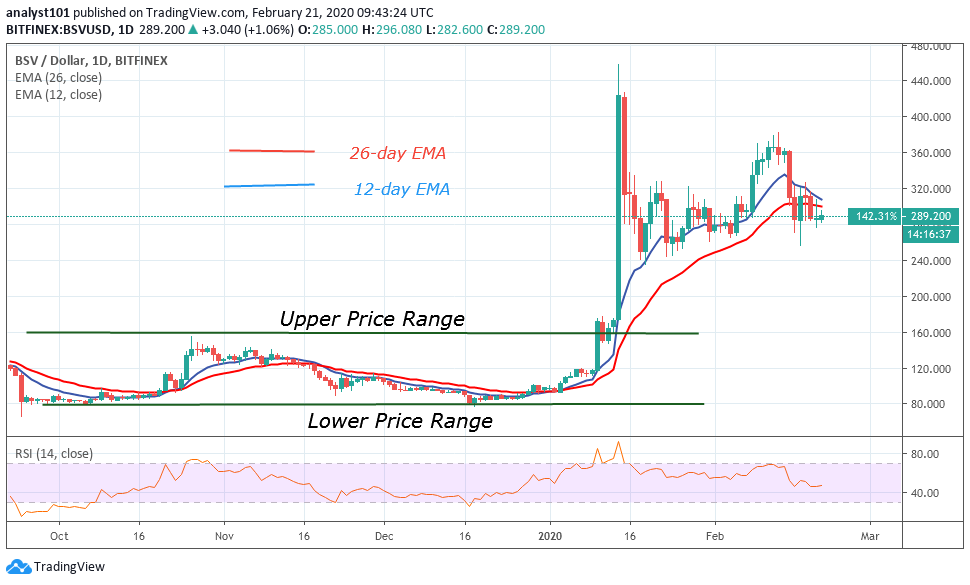 At the moment, BSV is confined within the levels of $240 and $320. On the upside, a price break above $360 will push the coin above $440.The Relative Strength Index period 14 level 48 indicates that the coin is in the downtrend zone.

EOS/USD Major Trend: Bullish
EOS is also in an upward move as the price reaches a high of $5.40. The bulls took the price to the recent high but could not push the price above the current resistance. The pair trades below the resistance for three days before the coin was resisted. EOS is said to be overbought according to the stochastic. The downward movement of the coin was as a result of the presence of sellers in the overbought region that pushed the EOS downward. 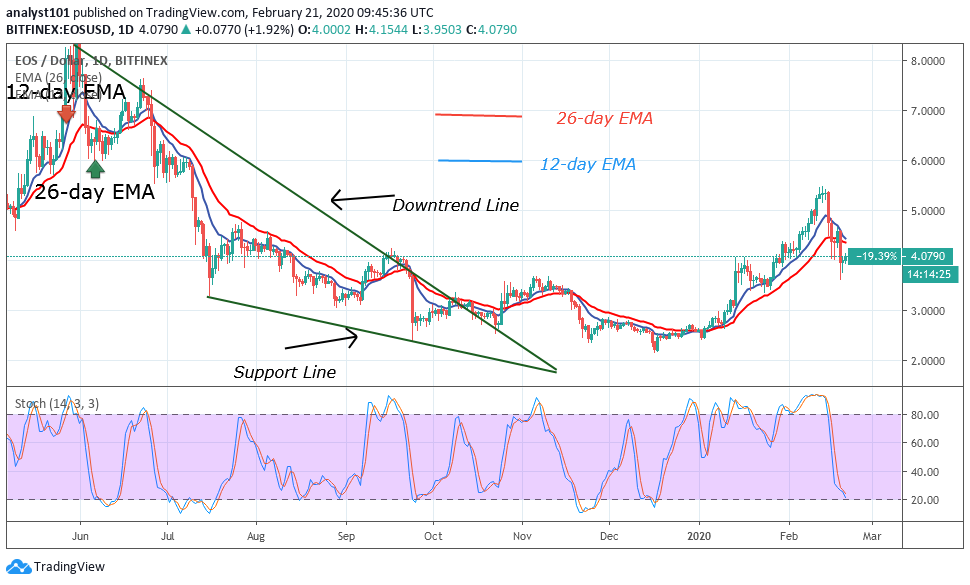 EOS fell to the low of $4.0 but pulled back to retest the $4.60 resistance. The bears still have the upper hand, as EOS fell to the low of $3.80. On the upside, a break above $4.60 resistance will propel EOS to retest the overhead resistance. Meanwhile, EOS is below 40% range of the daily stochastic. However, the stochastic bands are making a U-turn. That means the bearish momentum is turning bullish.

BNB/USD Major Trend: Ranging
Binance Coin made an impressive move in February as the coin reached a high of $27. At the recent high the bulls made concerted efforts to break above the resistance. After making two unsuccessful attempts at the resistance, the coin was resisted as the price fell to the low of $22. The price pulled back to retest the resistance at $24. The downward move continued to a low of $21. BNB is currently at level 53 of the Relative Strength Index which indicates that the coin is in uptrend zone. BNB is likely to rise. 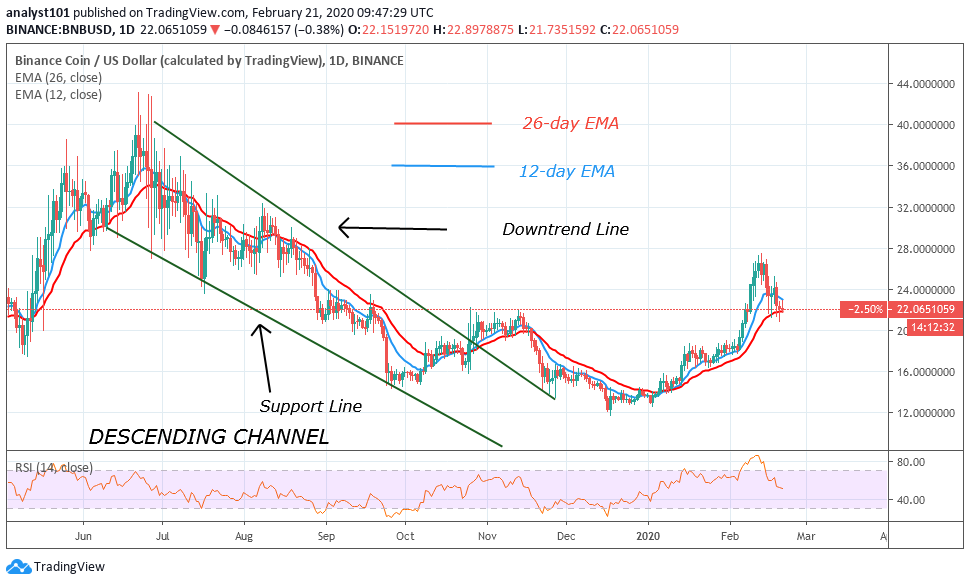