The cryptocurrency markets are bearish. The current upward moves by the bulls are not sufficient to push the coins out of the downtrend. IOTA may depreciate further if the rising wedge is fulfilled. The other altcoins have slim recovery chances as the cryptos face resistance at the bottom of the chart.

The cryptocurrency is in a bear market since February. Previously, the coin has been in a bull market in January but was interrupted. IOTA (MIOTA) reached a high of $0.3500 while in a bull market but was resisted. The bulls could not break the $0.3500 resistance because the coin has reached the overbought region. Nonetheless, sellers emerged to push prices downward. 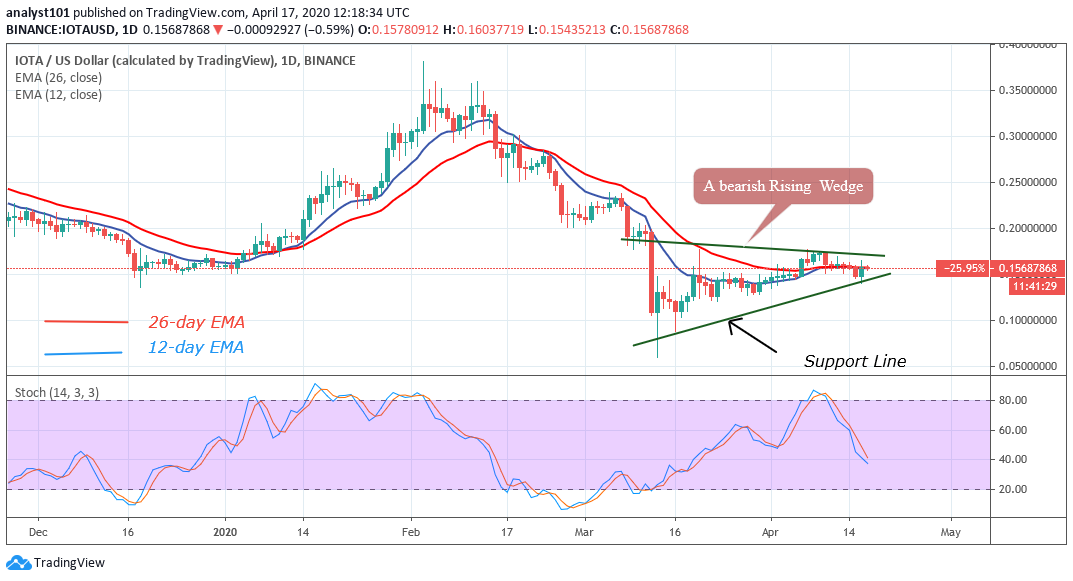 The crypto dropped to a low of $0.1056 and resumed consolidation above the current support. Presently, in the downtrend, a bearish rising wedge has been formed. A bearish rising wedge begins wide at the bottom and contracts as prices moved higher. This pattern has a bearish bias. On the downside, it could signal the continuation of the downward move. Meanwhile, the coin is below 40% range of the daily stochastic. A downward movement is expected. 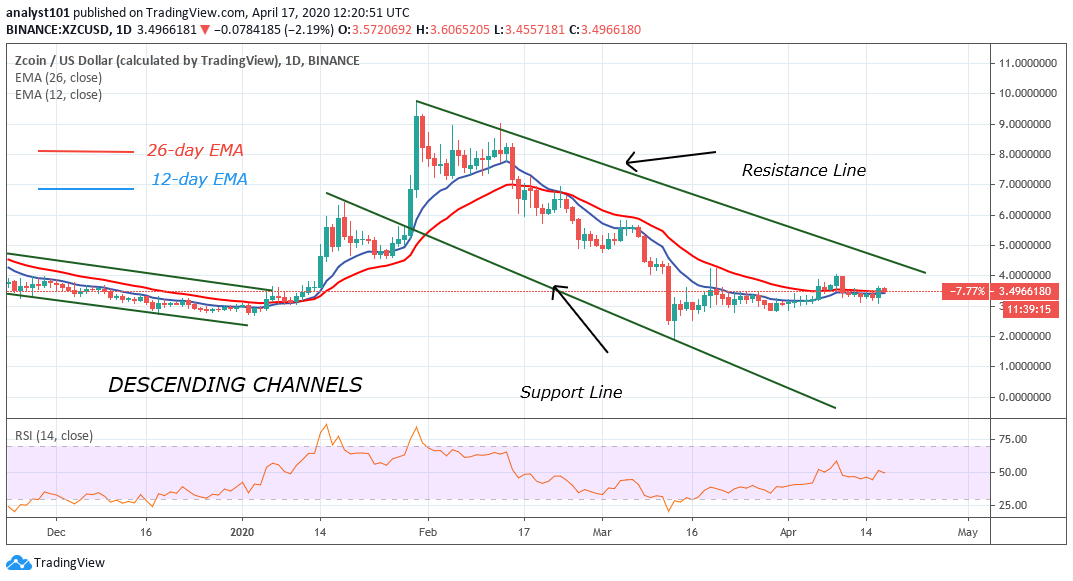 Zcoin is in a bear market. After its bearish impulse on March 12, the crypto has been in a sideways move below the resistance at $4. In March and April, the bulls made two unsuccessful attempts to break the $4 resistance but were resisted. The market fell to $3 low and resumed a sideways move. Nonetheless, as price reaches the $4 resistance the market is said to be in the overbought region according to the Relative Strength Index. Sellers emerged whenever the market reaches that level. On the whole, RSI is at level 57 indicating that the coin is in the uptrend zone and above the centerline 50.

Zcash is making an upward move but it is currently facing resistance at $40. The bulls have made two unsuccessful attempts at the resistance without breaking it. At the initial resistance, the market fell to $36 low and resumed sideways move. Today, the crypto is falling, as the market reaches below $36. However, a break below $36 will extend to a low of $24 or $20. Alternatively, a rebound at $36 will catapult the coin above $40 and extend to the high of $50. Meanwhile, ZEC is at level 57 of the Relative Strength Index. This implies that it is above the centerline 50 and in the uptrend zone. The upward move is likely. 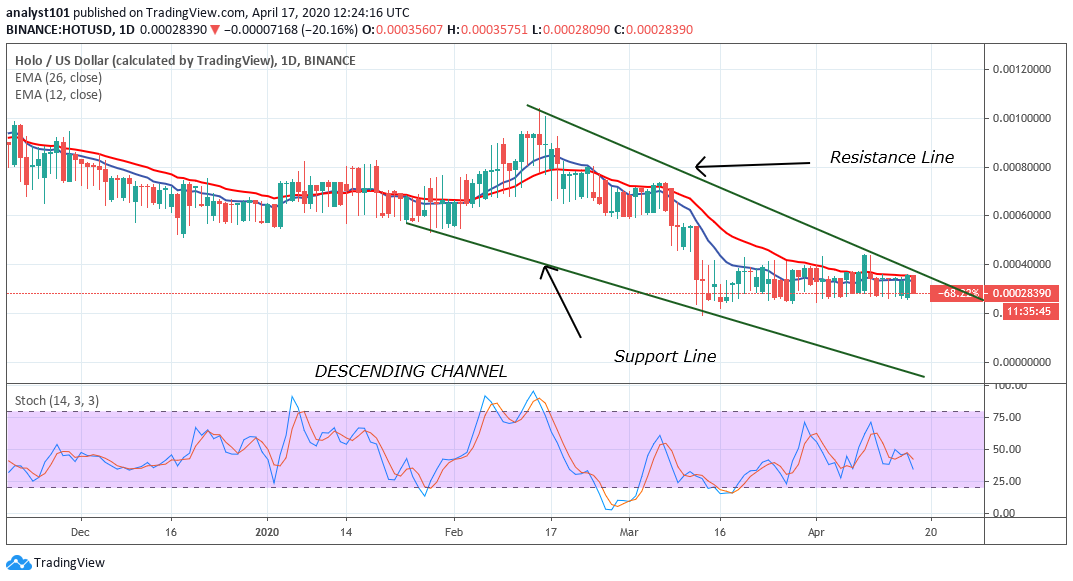 The crypto has been in a bear market but the downward move continued as price reached the high of $0.00100 in February. According to the daily stochastic, the market is in an overbought region. Sellers emerged to push the coin to the low of $0.00020 on March 12. The market has been in consolidation above the current support since March 12. The daily stochastic bands are sloping horizontally indicating the range-bound move. 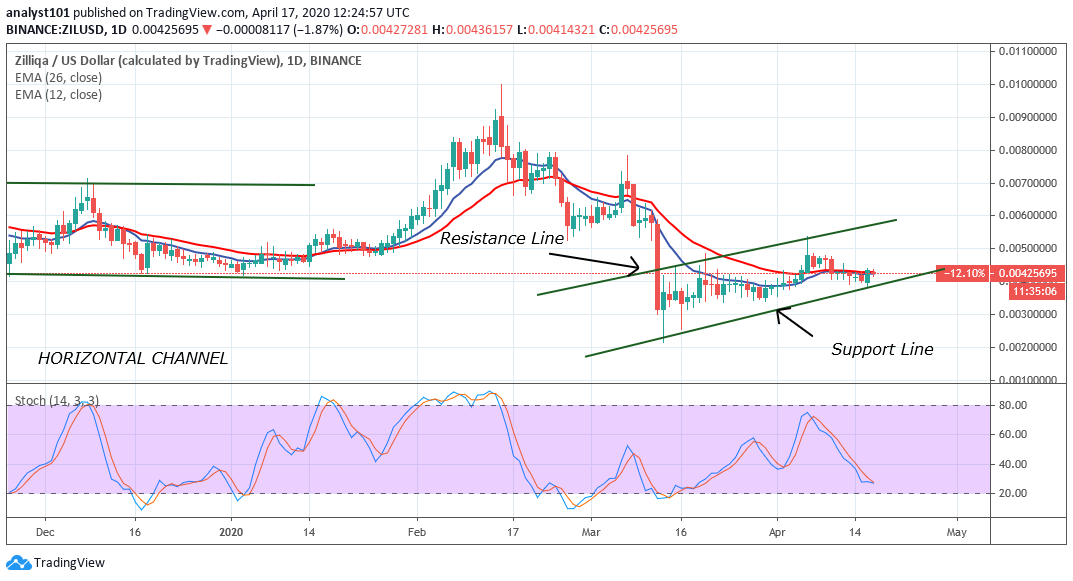 Yesterday, the crypto was at the low of $0.00038 attempting to rebound. The coin fell to the current low because it reached the overbought region in February. In retrospect, Zilliqa was in a bull market in January and February. In February, the market reached a high of $0.0100 and was in the overbought region. Sellers emerged to push prices downward. The coin fell to a low of $0.00020. Meanwhile, the daily stochastic bands are making U-turn above 20% range. This indicates a bullish signal.