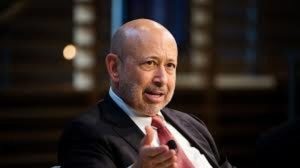 Former Goldman Sachs Chairman and CEO Lloyd Blankfein believes that while crypto assets will in the future form the basis of the economy, they are yet to mature. The ongoing Global Financial Leadership Conference (GFLC) Florida saw Blankfein expressing his skepticism over crypto assets.

Crypto Assets Have A Long Way to Go

Undoubtedly, crypto adoption has picked up pace over a few years. However, the school of thought still prevails that Bitcoin and other cryptos have a long way to go before they can be termed as mature assets. Interestingly, ex-Goldman Sachs chairman and CEO Lloyd Blankfein is one of them

“I can see the basis for it. I can see how the world could evolve into that,”

he said at the conference.

Bitcoin still has some questions that need to be answered. With some of these cryptocurrencies, you can’t manage the money laundering situation. How could it be a good store of wealth when it could move 10 or 12 percent in a day several days in a row? And how could it be a good medium of exchange when someone could steal it and you would never know, or you lose the code and it disappears?”

Earlier this year, rumors surfaced that Goldman Sachs was creating a digital token. The base for the rumor was that several banks were supposed to be investing $50 million in assets for creating a digital cash system to settle financial transactions.  Time and again, banks have been linked to performing Bitcoin operations by either rumor or confirmed reports.

While several questions remain unanswered, more and more institutions are taking interest in Bitcoin. As per Commodity Futures Trading Commission (CFTC) Commitment of Traders report large open interest holders of CME Group bitcoin futures contracts were up 38% in the third quarter from the previous year.

Furthermore, CME Group Chairman and CEO Terry Duffy discussed the status of cryptocurrencies as commodities. Earlier, as reported by Coingape CFTC Commissioner Heath Tarbert had defined Ether as a commodity and also said that Bitcoin possesses the same qualities. Thus, resonating with SEC’s previous ruling that Bitcoin and Ether are not securities. Furthermore, he said that CFTC is working in close cooperation with the SEC to provide clarity on these issues.

He further said that futures markets will only exist if it is valued in a proper manner. Furthermore, he added that a CFTC regulated exchange would have all the price transparency and price discovery that these markets have had for 150 years.

How long before actually the crypto market matures? Let us know, what you think in the comments below!