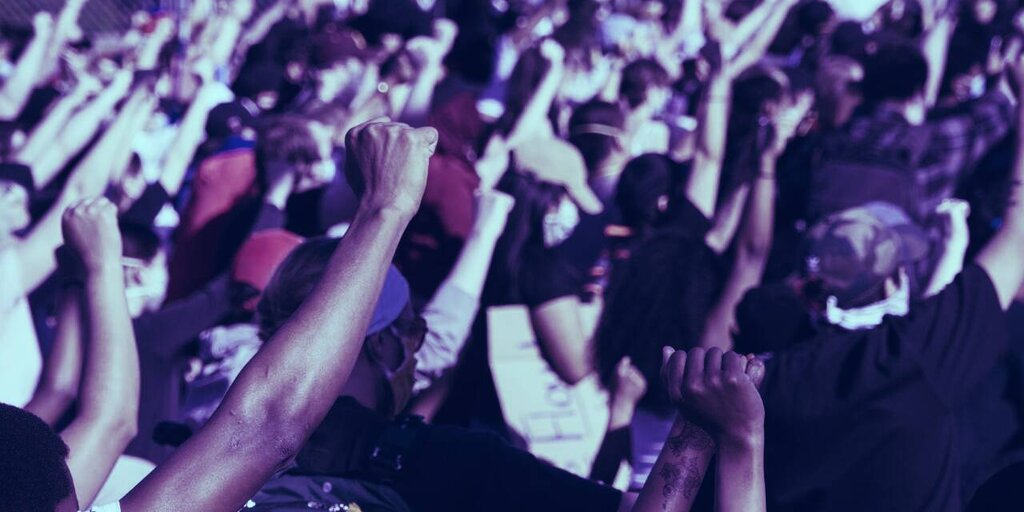 The horrific death of African American George Floyd in police custody last month has prompted an enormous reaction, with ongoing protests against police brutality and racial discrimination erupting throughout the United States and beyond.

Companies who’ve previously sat out the debate have been forced to take a stand on the issue, with many sharing messages of support for racial justice, and laying out plans to enact changes or contribute significant resources towards inclusion and diversity.

The response from the crypto industry, though, has been more muted. Many businesses, exchanges, and foundations in the space have failed to comment on the death of George Floyd, the protests, or the Black Lives Matter movement. Where companies have offered messages of support, there have been few concrete commitments to improve employee diversity or better serve communities of color.

In the view of Robert Greenfield IV, President and CEO of benefit corporation Emerging Impact, the crypto community’s response to the events of the last couple weeks has been “really weak and almost non-existent.”

“In particular, that’s troublesome because this blockchain ethos, the reason why a lot of us got into this space, especially in the early days, was to make systematic change, right?” he told Decrypt. “It was to disintermediate power centers and government and finance, and every aspect of life, so that people who are being taken advantage of by the system could afford resources more cheaply, but also people who don’t have any access at all could gain that type of access.”

“The reason why a lot of us got into this space was to make systematic change.”

He argued that the crypto community has applied its decentralized approach in an “extremely selective” way. “It doesn’t apply to people who are getting killed by police unarmed, but it does apply to a startup that wants to get funded by the Ethereum Foundation at Devcon,” he said. “That’s really unacceptable, and I think people forget that all of the movement of technology as a whole—not just blockchain—is a multicultural effort.”

What have crypto companies said about Black Lives Matter?

Some blockchain and crypto firms have spoken out. Brad Garlinghouse, CEO at Ripple, tweeted that he stood in solidarity with anyone fighting for black lives, adding, “We need to be proactively anti-racist—presently and in the future—and completely change the way that we see and support our communities of color. This is about life and death.” Ripple also tweeted a message on the subject, specifically calling out the names of Floyd and other black Americans killed in recent months, including Breonna Taylor and Ahmaud Arbery.

Coinbase CEO Brian Armstrong also shared comments on the situation, with a tweet thread that began, “I want to unequivocally say that Black Lives Matter.” He wrote about systemic racism and conversations that he had with black Coinbase employees, and finished by pledging to expand his efforts with nonprofit platform GiveCrypto. He said that Coinbase would also contribute $250,000 across GiveCrypto and four other organizations chosen by employees, and that the exchange would match up to another $250,000 contributed by employees.

I want to unequivocally say that Black Lives Matter.

Joseph Lubin, co-founder of Ethereum and founder of Consensys (which, for disclosure, funds an editorially independent Decrypt), tweeted, “Many in our company and community protested this week in solidarity with Black lives and in response to institutionalized racism and the disproportionate violence Black people have endured.” He went on to write, “We need to do more as a company and ecosystem to acknowledge racism where it occurs, enable more diverse participants to build new technologies, and support the people and organizations already doing this work.”

Many in our company and community protested this week in solidarity with Black lives and in response to institutionalized racism and the disproportionate violence Black people have endured. We see you and we are with you. #BlackLivesMatter

Neither Coinbase nor Consensys shared their own separate messages on the subject, opting instead to retweet their respective leaders’ comments. PR representatives for each firm likewise pointed Decrypt to their tweet threads.

Greenfield has tweeted at prominent blockchain companies and foundations that have not commented on the matter, including Binance and The Ethereum Foundation. Since speaking with Decrypt, he’s shared an opinion piece on CoinDesk that calls out additional companies for their silence, including the Libra Association and Maker Foundation. He told Decrypt that he believes the leadership of some crypto companies has a “cultural bias” and don’t sense the urgency and importance of the protests and movement.

“You have people at the top who don’t fundamentally believe in the protests and what’s happening.”

“You have people at the top who don’t fundamentally believe in the protests and what’s happening,” said Greenfield. “These are the same people that we see at every crypto conference in multiple countries across the year, who are supposedly going to lead us to blockchain mass adoption.”

“Your cultural comfort is not more important than somebody getting shot for selling a cigarette, or sitting in the street, or being in their own apartment,” he added.

What can crypto companies do to support racial equality?

Following the protests, Greenfield has launched a #CryptoForChange campaign, asking companies and individuals in the space to meet certain requirements to fight against systemic racism and police brutality. Companies supporting the initiative include Storj, Althea, Gitcoin, and The Giving Block.

He argued that in order to rise to the moment and deliver real, lasting change, putting out a PR or social media statement is the baseline—but that alone isn’t enough.

“It’s sad to say this, but I do think the first step is doing a press release, a statement—standing in solidarity—and putting that on social media,” he told Decrypt. “Citi Group and J.P. Morgan, their executives coming out in support was a massive deal. That sends a signal to other organizations as to: ‘Okay, how ethical are we?’ I think there’s a psychological effect to that.”

Beyond that, Greenfield said, the next key step is to share employment diversity stats—something that he suggested is rare in the crypto space. “It doesn’t matter if they’re terrible,” he said. “If they’re terrible, then put out a strategy, publicly, as to how you’re going to address that.” Companies should make it a goal to have at least one non-profit partnership with a civic organization, or an organization dedicated to educating marginalized youths in STEM, he argued. “These are all things that don’t cost a lot to do, they really don’t, and there’s so many organizations.”

Greenfield sees ample opportunity for blockchain to help improve and empower the aid from humanitarian organizations, and for cryptocurrency to help level the playing field across races when it comes to financial access and opportunities. But such goals become all the more challenging when the organizations espousing them don’t appear to be living up to their own values.

“A lot of these organizations have global, financial inclusion mission statements,” said Greenfield. However, he characterizes empty words without real action as a kind of “performance activism.” He added, “You’re performing a version of your mission for marketing purposes, but you’re not really living it.”