Coronavirus Updates: A Billionaire Bitcoin [BTC] Critic Says the World Needs “WHO” Now Than Ever 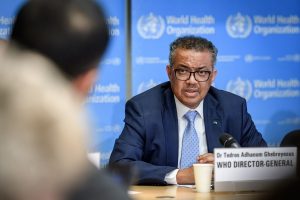 The World Health Organization (WHO) is under fire. Specifically, the organization is now being attacked by political leaders who blame them of mishandling the spread of the coronavirus pandemic.

The highly contagious zoonotic virus has now claimed over 120,000 lives across the globe, draining the economy, and throwing the world into a disarray.

Amid the missiles, the WHO now finds a friendly ally in Bill Gates. Bill Gates is the millionaire founder of the United States’ most valuable tech company: Microsoft.

Its stock, like the rest, has been battered by the free-falling asset prices, cautious traders rushing to the exits–amid revelations that leading senators with insider knowledge of the severity of coronavirus had unloaded millions in stocks.

Bill Gates–who has been known to criticized Bitcoin saying he won’t hesitate to short it if he had the chance, said the decision by President Trump—to withdraw funding to the organization pending its review on its handling of the coronavirus pandemic, is dangerous.

Halting funding for the World Health Organization during a world health crisis is as dangerous as it sounds. Their work is slowing the spread of COVID-19 and if that work is stopped no other organization can replace them. The world needs @WHO now more than ever.

The WHO declared coronavirus a public health emergency concern back in January.

The Bill and Melinda Gates Foundation pledged to donate up-to $100 million to combat the spread of the virus.

Donald Trump: the WHO Trusted too much in China

In response to Donald Trump’s order, the billionaire tweeted his support for the organization and how the world needs it at this time.

“Their work is slowing the spread of Covid-19 and if that work is stopped no other organization can replace them. The world needs WHO now more than ever.”

Donald Trump accuses the WHO of mismanaging and covering useful data need to counter the spread of the virus.

“Had the WHO done its job to get medical experts into China to objectively assess the situation on the ground and to call out China’s lack of transparency, the outbreak could have been contained at its source with very little death.”

He even accuses the organization of focusing more on China yet they only donated $42 million.

“I can’t believe he’s talking about politics when you look at the relationship they have to China. So China spends 42 million, we spent 450 million and everything seems to be China’s way. That’s not right, it’s not fair to us and honestly it’s not fair to the world.”

WHO Responds to Trump’s Tirade

The WHO Director-General Tedros Adhanom Ghebreyesus, in a statement, responded, urging leaders not to politicize coronavirus.

“If you don’t want many more body bags, then you refrain from politicizing it. My short message is: Please quarantine politicizing COVID. The unity of your country will be very important to defeat this dangerous virus.”

Amid the pandemic, Dr. Tedros Adhanom Ghebreyesus has been a subject of vile racist attacks.

WHO DG @DrTedros reveals he’s received death threats & racial abuse.
Says he is proud to be Black & doesn’t give a damn –
‘But when the whole Black community is insulted, when Africa is insulted, then I don’t tolerate’.
On Trump criticising him: don’t politicise Covid-19 pic.twitter.com/wSWhazhhwg

Like Gates, Dr. Patrice Harris, the WHO President believes Donald Trump’s decision is a step in the wrong direction “that will not make defeating Covid-19 easier.”

“During the worst public health crisis in a century, halting funding to the World Health Organization (WHO) is a dangerous step in the wrong direction that will not make defeating Covid-19 easier.”