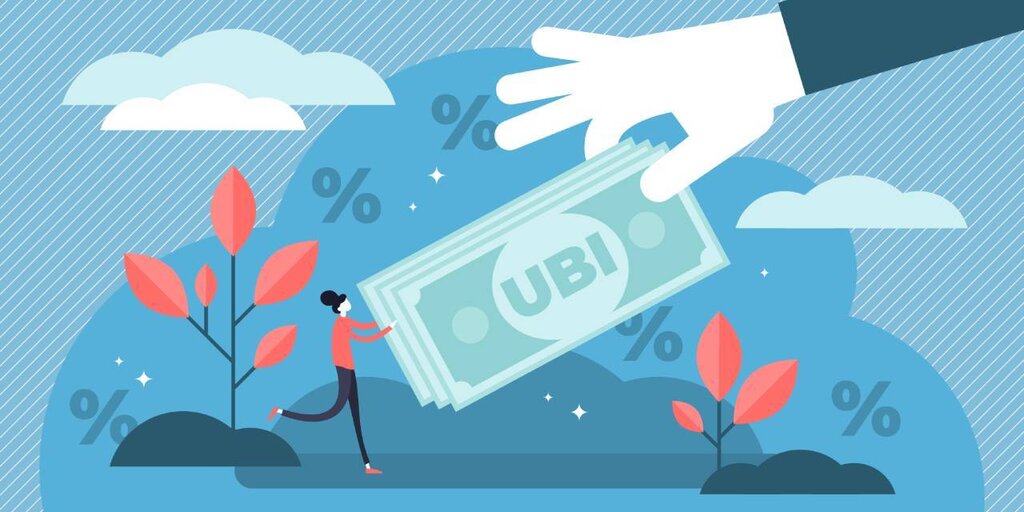 The premise of universal basic income is simple: to deal with mass unemployment, layoffs, and economic crisis, some governments are proposing to write a check to everyone in their country, regardless of their age or income.

Already, the US government has issued stimulus checks of $1,200 to thousands of Americans; some US politicians, like Rep. Alexandria Ocasio-Cortez, believe it should go a step further and offer “no-strings UBI programs”. Last month, two of her fellow Democrats proposed a ‘Coronavirus Check Bill’ that, if passed, would send $2,000 each month to every American over 16 years old.

Other high-profile advocates of UBI include former Presidential candidate (and Bitcoin enthusiast) Andrew Yang, who ran on a platform of giving every adult in the US $1,000 a month, and Tesla boss Elon Musk.

Right about now would be a great time to weigh emergency measures like:
– Extending Medicare/Medicaid coverage to all
– Eviction freezes
– No-strings UBI programs
– Eliminating work requirements for SNAP &other assistance
– Humanitarian provisions in prisons & decarceral policies

But transferring cash to millions is error-prone, expensive and slow, claim leaders in the blockchain industry, who propose replacing existing infrastructure with decentralized alternatives. So, how would it work? Would this involve digital currencies? And, importantly, does the blockchain industry—known for its libertarian and anarchist bent—think it’s worth a shot?

What is Universal Basic Income, and why is it popular now?

In its purest form, universal basic income is a check to everyone in the country above a certain age, issued in regular payments. The idea is that it’ll stave off poverty in times of unemployment or recession, and otherwise reduce people’s reliance on unskilled jobs; giving them time to work on creative endeavors.

It’s a bold proposal, and has only ever really been partially implemented, or implemented in pilots. Mexico, Finland, and Alaska are counted among small victories for proponents of UBI. But governments worldwide never completely incorporated it into national policies. Finland scrapped their pilot after it became too expensive, and other pilots remain just that—small-scale experiments.

But the coronavirus has changed everything, and governments are starting to consider universal basic income as a countermeasure to massive economic fallout. Emergency stimulus packages and blank government checks stem the tide, but many argue that the money isn’t coming quick enough, and the conditions exclude too many people. Giving everyone in a country a basic income could help plug the income gap, and help get a broken economy back on its feet.

Some leaders in the blockchain industry, which is itself a proponent of an unconventional economic system, see worth in the idea. “Governments would be wise to implement some sort of UBI to allow for a sense of financial security within communities and to ensure some sense of stability in the rough months to come,” Kadan Stadelman, CTO of Komodo, told Decrypt.

Jason Wu, Founder and CEO of DeFiner, thinks that “UBI solves the problem of excessive supply and low demand during the current economic crisis. Without such stimulus measures the nation’s wealth will be concentrated in only a small group of people, who will never consume enough when compared to the whole population,” he said.

Spain is among the first countries to try the idea. After its (already glum) economy was wrecked by the coronavirus, the government vowed to roll out a UBI programme. Some sort of basic income will be “in place as soon as possible,” said Social Security Minister Jose Luis Escriva this week. If it works, the Economy Minister Nadia Calvino said that the hope is that it “stays forever, that becomes a structural instrument, a permanent instrument,” she said.

How could blockchain help with universal basic income?

But distributing any kind of universal basic income is a difficult feat to pull off. Working out how much money is owed to whom; whether, and how, conditions should be attached to the cash drops; and confirming that money has indeed reached its intended recipients, are all major issues.

Disbursing money through conventional means—checks and bank transfers—is also expensive and slow, argues Heinrich Zetlmayer, Founder and Partner at Blockchain Valley Ventures. “The economic and social impact caused by the coronavirus pandemic requires a quick and accurate response by governments,” he told Decrypt.

Encointer’s plan to bring universal basic income to the unbanked

Zetlmayer, among others Decrypt spoke to, think that blockchain and cryptocurrencies could help with the distribution of universal basic income.

“In an environment where users do not trust each other and are not even required to trust, but do not want to bear the extra costs—blockchain will be [governments’] choice,” Alex Axelrod of Aximetria told Decrypt. Blockchain’s immutable ledger would provide governments, as well as their watchdogs, with immutable proof that income checks have been transferred to recipients.

“[Blockchain could] play a vital role in the banking system for the disbursement of the UBI.”

Zetlmayer thinks that blockchain’s “fully automated and clearance system” could “play a vital role in the banking system for the disbursement of the UBI.” He argues that the US financial payment system, which currently “relies on outdated processes such as Automated Clearing House (ACH) and checks,” doesn’t cut it.

Distributing hundreds of billions of dollars could be far cheaper—on April 1, someone moved $633 million in Bitcoin for $0.26. (A transaction worth the same amount would cost $3,600 through the popular payment method, Transferwise).

Are digital dollars the solution?

Of course, the main problem with distributing money on the blockchain isn’t just how, but what.

The US government is unlikely to distribute Bitcoin to hundreds of millions of citizens. Dreams of the digital dollar are lofty. Indeed, David Treat, one of the directors of the Digital Dollar Project, a non-profit that promotes the implementation of a central bank issued, blockchain-based US dollar, said last week that a digital dollar “is not something that can be done in weeks.” And a proposal for a digital dollar was shelved by the US Congress last month when considering how best to distribute remittances.

But Stadelman, CTO of Komodo, thinks that issuing new digital currencies would be a good idea, because it would let governments keep watch over the effects of any universal basic income scheme and to make adjustments accordingly. “It wouldn’t be difficult for expenses to be tracked, which would allow for governments to set desired spending ratios, and to showcase the transparency of where that money was going,” he said.

Digital tokens would function as a voucher-like system, he said, that could “only be available for essential purchases, such as transportation, groceries, and rent.” A more complicated system, he acknowledges, “would take longer to implement.”

“The technology is there, but is the political will?”

CoinGate CTO Rytis Beliauskas also thinks that blockchain could help governments attach various conditions to payouts, “like only being able to spend it in government-approved stores,” and letting money “expire” after a set period of time, “forcing it to be spent fast and not saved.”

Jason Wu, Founder and CEO of DeFiner, disagrees. “Digital currencies can and should play a major part in delivering these measures to the population—the technology is there, but is the political will?”