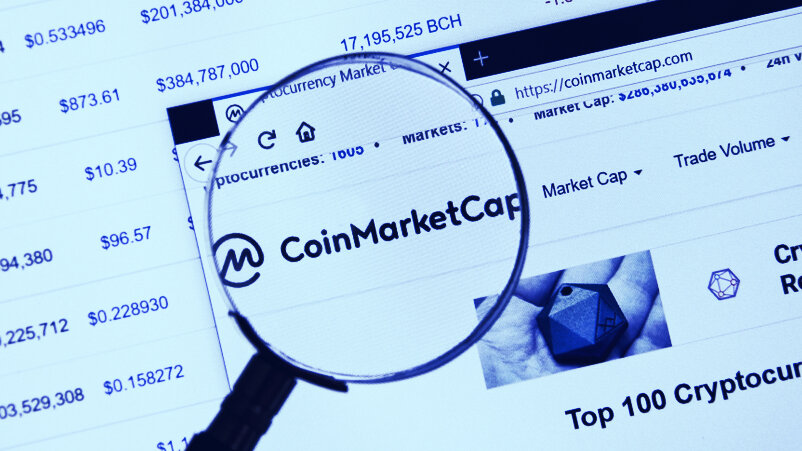 Crypto data provider CoinMarketCap has changed its exchange ranking system, just over a month after it was acquired by crypto exchange Binance, for a rumoured $400 million. The new system now puts Binance first—and it removes previous numbers that suggested the exchange was home to skewed or potentially suspicious trading volumes.

The new system ranks exchanges by web traffic. “Instead of asking exchanges to submit their user numbers, a good intermediate proxy will be web traffic,” CoinMarketCap stated. It is now the default metric for ranking exchanges. It puts Binance at the top with a score of 1,000, followed by Coinbase Pro and BitMEX.

We listened. @coinmarketcap updated exchange rankings by incorporating web traffic factor. Checkout the update rankings at URL below and let us know what you think.https://t.co/00jEVwiC6c https://t.co/WGmyM0MkCj

“Listen-to-community time. What would you like to see improved, added or removed from CoinMarketCap?” Binance CEO Changpeng Zhao tweeted on April 22.

“We listened. Coinmarketcap updated exchange rankings by incorporating web traffic factor. Checkout the update rankings at URL below and let us know what you think,” Zhao tweeted yesterday.

CoinMarketCap’s birthday roast got too hot to handle

When asked if Zhao was involved in the decision making, CoinMarketCap chief strategy officer Carylyne Chan replied that CoinMarketCap is an independent entity. “We used CZ’s Twitter presence and feed as a channel to gather feedback. It is one of the inputs into our research process,” she said.

“We do not update algorithms or rankings to suit anyone’s agenda, this runs completely counter to the history and value of CoinMarketCap,” she added.

As CoinTelegraph pointed out, Chan said, in an interview last year, “We’ve seen other people do things like you’ve said, web traffic as a way [to verify exchanges are legitimate] but people trade using API keys so that’s why web traffic is not a good indicator.”

On this point, Chan said, “We still do not believe that web traffic is the be-all and end-all metric. To repeat ourselves, as per our blog post, web traffic is one of the many factors that we are iterating on to provide a better adjusted volume metric for our end users.”

We have reached out to Binance and will update this story if we hear back.

But the data provider hasn’t just changed its stance on using web traffic, it has also removed an indicator it created in July 2018 designed to provide more accurate data, and weed out skewed and suspicious data.

That month, Chan—who was the head of marketing at the time—highlighted, in a blog post, the three issues that CoinMarketCap was trying to solve were trans-fee mining, low-fee models and artificial volumes/wash trading.

On April 3, the day after Binance acquired CoinMarketCap, the exchange was ranked 15 on the site. The data provider listed Binance’s claimed exchange volume as $6.7 billion. But it put its adjusted volume, a metric designed to remove any suspicious activity, at $2.1 billion.

“Adjusted volume is a way to view all exchanges, excluding data that is skewed (too different from other exchanges) or potentially suspicious. As such, you might think of adjusted volume as a way for us to provide a more nuanced presentation of the data, and reported volume as plainly what the exchanges provide to us through their API,” CoinMarketCap explained.

But that metric has now gone. The original metric, including “potentially suspicious” data—according to CoinMarketCap—is the only one that remains. Here too, Binance ranks top.

On this point, Chan said, “You are mistaken about the premise of adjusted volumes. Our adjusted volume metric only adjusts for – i.e. removes – volume that comes from markets that have no fees or have transaction mining; it also removes derivative trading volume. It has nothing to do with suspicious trading activity.”

Why is the top important?

Ranking at the top of exchange comparison sites is important for exchanges. A Bitwise report claimed that up to 95% of exchange volumes are fake, as they use wash trading to inflate their volumes—and move up the rankings.

As Coindesk reported, inflating numbers on exchanges is big business. Alexey Andryunin, a 20-year-old sophomore student at Moscow State University, charges $15,000 to his 30 clients to fake trading volumes for them. While he’s increasing volumes for token projects as opposed to exchanges, he claimed that exchanges are aware of what he does and make no moves to counter him.

Fundamentally the top spot is important because it increases exposure for the brand and makes it look like it’s the most popular exchange, thereby attracting new customers. These new customers not only pay trading fees, and withdrawal fees, but they also increase trading volumes—putting the exchange even higher on the rankings and bringing in more customers. A virtuous circle—or a vicious one.

This article has been updated with comments from CoinMarketCap. The date when the adjusted volume metric was created was corrected from July 2019, to July 2018.

This article has updated ‘wash trading’ to ‘skewed and potentially suspicious’ data, per the CoinMarketCap website explanation of the adjusted volume metric.