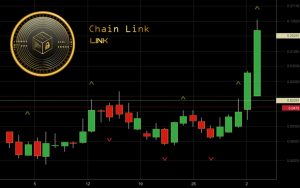 Chainlink (LINK) is on the up as the market suffers yet another bearish move as the total cryptocurrency market cap fell below the $200 billion USD mark. In a dark 24 hours past, Bitcoin (BTC), the driver of the market, lost over $200 USD since hitting intraday highs of $7,550 USD, representing a 2.6% drop. In the same period, LINK/USD pair soared by 10% to trade above $2.30 USD for the first time since Dec.1. The magnificent rise comes as bulls registered the highest volume across the week.

After failing to hit the $3.40 resistance during the bullish run in mid-November, bears took control of the market pushing LINK/USD in a seven-day downtrend to touch intraday lows of $2.10 USD on November 22. The death trend stretched out till Dec. 5 seeing LINK bulls lose strength in the market as the price plummeted below the two-dollar mark for the first time since October, trading at $1.90 USD.

Since, the LINK/USD market has awakened with a roar as bulls took back control of the market. Looking at the 4-hour charts, the price traded sideways for the better part of the week as the price squeezed towards breaking the upper resistance level on the wedge pattern. As volumes blast past weekly highs the price shot to $2.3 USD in the next 24hours, representing a 15% increase in less than 24 hours.

Having broken the wedge resistance, bulls are charging upwards with a conscience to hit and break $2.40 USD resistance level. The increasing volumes on the pair signal the continuation of the uptrend setting the relative strength index on a firm rise towards overbought levels.

A long way up to $3.40 resistance levels

While every pump does not signify a continuation of the trend, LINK offers investors an open possibility of a 2X growth in the coming year. LINK has been one of the best performers in the cryptocurrency top coins and bulls took note as the coin soared to over $4.70 in June. Furthermore, the coin has constantly offered positive return bursts in a down-trending market through the year, offering kind of a hedge to crypto investors.

A close look at the daily charts shows a possible bullish breakout is on the cards for the LINK/USD pair following the recent heroics. However, despite recording the highest volumes in over three weeks, since mid-Nov’s bullish movements, bulls will need to reinforce their strength to push the coin above the $3.40 major resistance to have any hope of going back to all-time highs.

The post Chainlink [LINK] on a Surge as Total Market Capitalization Drops Below $200 Billion appeared first on Coingape.