Chainlink ($LINK) Has Surged 100% Since September: Here Is What You Need to Know

Chainlink recently announced a number of partnerships that show the intrinsic value behind its native cryptocurrency, $LINK.

Chainlink is already working with Google and, on a recent blog post, Google gave the project a surprise shout-out about Chainlink and how to use Ethereum and Google Cloud to build hybrid blockchain applications, shooting up the price of the cryptocurrency.

Over the last few days, Chainlink (LINK) increased over 20% and some experts predict to see LINK reaching around US$10 and making it to the top 10 cryptocurrencies in CoinMarketCap by mid-2020. 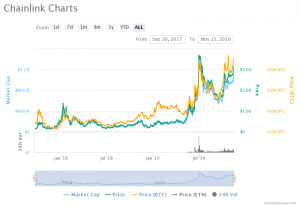 The Twitter community saw similarities between the cryptocurrency and Ethereum’s price behavior in 2016:

And the sentiment about LINK remains very bullish on Twitter with some claiming that LINK’s is the new star in the crypto world:

People are expecting too mutch when talking about staking. Staking is not alone what’s going to drive $link to the moon

. #Chainlink has already everything to become a

in the crypto universe

If this enticed your curiosity about Chainlink ($LINK), here is all you need to know.

What is Chainlink About?

Chainlink is a decentralized oracle network that connects blockchain-based smart contracts to external data, payment networks, and various real-world events. It is known to have a secure infrastructure that allows smart contracts to link to APIs to communicate with and obtain data from external sources.

According to its website, the Chainlink network can be used while writing complex smart contracts – as it provides “reliable, tamper-proof” inputs and outputs. As noted by its developers, Chainlink’s secure connectivity features are compatible with most blockchains.

Chainlink’s native cryptocurrency, called LINK, is one of the main components of its decentralized network. According to CryptoCompare data, Chainlink’s market capitalization, at the time of writing, stands at over $1.2 billion with LINK tokens trading at around US$3.00.