CFTC Chairman Highlights the ‘Key Development’ around Bitcoin and Cryptocurrencies 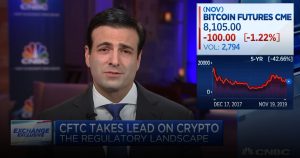 CFTC chairman Heath Tarbert answers some of the hard-hitting questions around Bitcoin, cryptocurrency, and its’ on-going regulations in the US. The CNBC interview covers various aspects related to cryptocurrencies, like clarity on securitization and Libra.

Escape Velocity for Bitcoin and cryptocurrencies

The cryptocurrency markets have independently grown to about $220 billion. Moreover, the decentralization many of the leading protocols prohibit direct regulation. Hence, while the thing is curtailed, for now, it can soon gather pace.

This raises concerns around capital controls and the influence that the government authorities have on them. Tarbet notes that,

I never use the term cryptocurrency. I have always used to term digital assets. because in my view… these are not yet legal tender, they’re not money… So something like Bitcoin is very important, but again, we classify it as a commodity.

However, a considerable part of the value proposition of these cryptocurrencies is as an exchange medium.

Chairman Tarbert notes that the ‘key development’ around these digital assets is if countries start accepting taxes in these cryptocurrencies. While he says that the US is still far away from it, but looks like he is not opposed to the possibility.

On Libra and Bitcoin

“Well they are fundamentally different products” – on Bitcoin and Libra

The CFTC chairman was also not entirely dismissive of Libra as most other regulators and politicians in the US are. According to him, Libra is still developing.

Moreover, there is a strong notion that Libra resembles an ETF in many aspects. Hence, it must be regulated as a security under the SEC. While Chairman Tarbert was confident about Bitcoin and Ethereum’s stance, he did not explicitly put Libra under any of these classifications.

Tarbert also affirms the stand of America around the development of this technology.

China’s recent push towards the adoption of blockchain technology calls for governments around the world to take note of it. In the past, France has also expressed its intent for developing the space.

He told the media,

Blockchain technology is being used first and foremost for these digital assets. But ultimately I could see it overtaking the internet, effectively parallel to the internet.

He says that their primary focus must be around the development of blockchain technology.

How do you think the blockchain industry will shape the future financial economy? Please share your views with us.

The post CFTC Chairman Highlights the ‘Key Development’ around Bitcoin and Cryptocurrencies appeared first on Coingape.