Cardano and Ethereum Price Surge Alongside Bitcoin — Will XLM Follow?

Cardano and Ethereum Price Surge Alongside Bitcoin — Will XLM Follow? 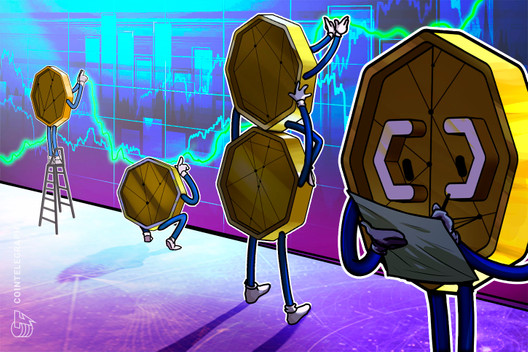 The recent surge in Bitcoin price led to rallies in Ethereum, Cardano, Theta Token and Band Protocol, can the upswing continue?

The price of Bitcoin (BTC) has been trading in a defined range over the past weeks as the halving hype has passed. Bitcoin’s price action also led to increased volatility in altcoins and some of the smaller altcoins have been showing impressive strength. So far, Theta Token (THETA) and Band Protocol (BAND) have been heavy movers.

However, in the previous days, the larger cap altcoins have started to move up, with Cardano (ADA) and Ether (ETH) as the primary movers. As Bitcoin attempts to find a way back to $10,000, traders will closely watch to see if there is more to follow from these large cap altcoins.

Ether breaks through the $215 barrier

The daily chart is showing an evident compression between $195 and $215, which finally broke to the upside. Alongside that, the chart is also showing some critical metrics for further upward momentum.

Key indicators for bull or bear markets are the support above or below the 100-day and 200-day moving average. As long as the price of a certain asset continues to move above the moving averages the asset is in bull territory.

Why is that important? Throughout the entire previous bull cycle, the price of Ethereum remained above these indicators, leading to a peak of $1,400 in January 2018.

Notably, the volume is also massively increasing in recent periods, showing signs of accumulation as volume precedes price. A similar sign is shown on the altcoin market capitalization chart.

The total market capitalization for altcoins is showing an impressive increase in volume, while the capitalization is also flipping the 100-day and 200-day MA for support.

As the chart is showing, the support is found at these MAs in which $68-$72 billion is an essential support.

The strongest large-cap altcoin in the past week has been Cardano which has moved 30% in recent days. This last push made the cryptocurrency rally towards the levels from February 2020, through which all the losses of the March 12 market crash have vanished.

What’s behind this push? From a fundamental perspective, a new roadmap for the release of Shelley is complete, triggering a further rally on the price.

However, on the technical side, the price has been holding the 100-day and 200-day MA as support earlier. After that, the green area around $0.05 became support, which fueled the continuation of the upwards momentum.

Confluent with previous statements, Cardano’s trading volume is also increasing this week. A possible explanation is that investors are jumping from Bitcoin towards altcoins as various projects are finally starting to release their products and platforms.

The green zone at $0.06-$0.0625 has to remain a support, but overall the structure is beginning to form a bullish pennant. This is due to the fact the price of Stellar Lumens continues to make higher lows, leading to a potential continuation to the upside.

What to expect from the ADA/BTC and ETH/BTC

The ETH/BTC pair has been trading inside a range structure since the August-September of 2019. However, since it’s low in September 2019, the price has been making structural higher lows.

Through that, the trend for ETH/BTC can be classified as an uptrend. What are the next significant hurdles for Ether?

Once the price of Ether is above the resistance level (whether or not a retest of the 0.021 sats level occurs), a new higher high should be made.

By creating a new higher high, the price of Ether will finally break out of this range. If the 0.027 sats level is broken to the upside, the next target lies at 0.034 sats.

Where Ether is still fighting the moving averages, is ADA/BTC is already leading the pack and acting above them.