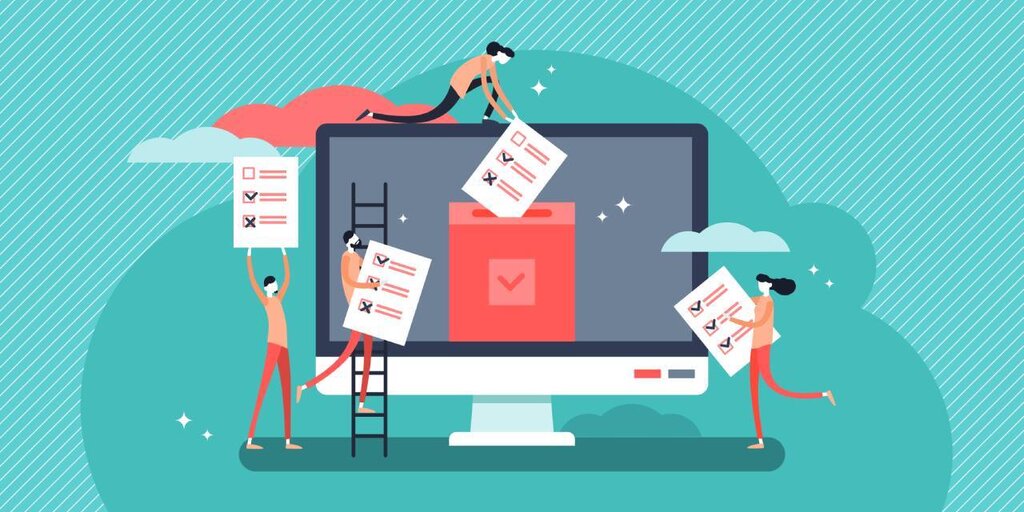 This coming November will see one of the most important political events in the world play out: the 2020 US presidential election. In the months ahead, Donald Trump and Joe Biden will try their best to corral voters, each hoping to lead the land of the free through one of the worst recessions—if not the worst—in the country’s short history.

Their expensive campaign trails have been cut short by the coronavirus pandemic. With large swathes of the population in lockdown as infection rates soar, political leaders face a looming question: if social distancing measures persist until November, how will US citizens vote for their next President?

Is blockchain the future of voting?

There are several possible solutions. Voters could head to polling booths in person and maintain social distancing—a risky option, and a logistical challenge. Mail-in ballots could be used, as in California, where Governor Gavin Newsom has ordered the November election be conducted as an all-mail ballot. Or the whole thing could be done online. That carries its own risks, including transparency, accountability and security.

Could blockchain, a way of recording votes on a decentralized, transparent, and tamper-proof ledger, help?

Proponents of blockchain voting tout its advantages: Since votes are recorded on an immutable ledger, elections are transparent (since anyone can verify that votes have been recorded); votes are indisputable and provably unique; and nobody can tell who voted for whom. And because blockchain’s ledger is distributed across thousands of computers worldwide, it’s incredibly difficult to shut the election down or tamper with the vote.

Pilots already show that elections can run on blockchain. Just last week, the Arizona State Republican Party convention made use of blockchain voting platform Voatz, having been forced online during the coronavirus lockdown.

Today we are elated to announce the successful completion of the Arizona State Republican Party's virtual #convention last weekend, where more than 1,100 voters submitted their ballots using Voatz. Way to trailblaze the way for future conventions! @AZGOP https://t.co/5S1awH4bGi

The Thai Democrat Party’s primary election used an e-voting system based on privacy coin Zcoin, while the US state of West Virginia held a small-scale pilot using Voatz in 2018. In South Korea, the city of Seoul has launched a blockchain petition system that verifies the identity of people on the network to prevent duplicate votes.

“People are starting to realize that there is a need to introduce [blockchain] solutions.”

“In the last three or four weeks, we started to be in discussions with people that we thought we wouldn’t be in discussions with,” he said. “In the US, people are starting to realize that there is a need to introduce [blockchain] solutions, not only in the private sector, but also to guarantee the continuity of democracy,” he added.

Reuben Yap, COO of Zcoin, told Decrypt that he’s also seen an “uptick in interest in these types of technologies” amid fears that elections could be postponed, particularly since his company’s technology was used in the Thai elections. “I don’t think anyone’s rushing to implement it, but I think it’s definitely triggered in a lot of people’s minds, ‘Maybe this is something that we should take a bit more seriously right now’.”

“It takes time to actually have a full scale national election,” Yap added. “But I think this is a great reason to start.”

In the run up to the 2020 US election, congresspeople are unlikely to hang out of windows on Capitol Hill and proclaim their love for decentralized ledgers. Blockchain is too risky, and too new, to support an election of over 300 million people.

Even Chow-Toun, who’s creating a blockchain voting system, knows that: “Society is not ready for the big bang,” he told Decrypt. Even if the technology were perfect, governments still wouldn’t adopt it en masse, he said: “People are not really ready to get this level of transparency, and this level of democracy, in government.” That’s why he’s chosen to market the product to the private sector first: shareholders might want to vote on new board members, or on decisions taken at annual general assemblies. It’s lower risk, and can operate on a much smaller scale.

Hesitance from lawmakers follows criticism of blockchain technology by leading researchers. “If I were running for office and they decided to use blockchain for that election, I’d be scared,” Jeremy Epstein, vice chairman of the Association for Computing Machinery’s US Technology Policy Committee, told Computer World. He concluded that postal ballots are the safest way to count the votes of absentee voters, rather than electronic votes.

MIT Researchers who reverse-engineered the blockchain voting app used in the West Virginia pilot, Voatz, published a paper in February that documented “vulnerabilities that allow different kinds of adversaries to alter, stop, or expose a user’s vote, including a sidechannel attack in which a completely passive network adversary can potentially recover a user’s secret ballot.” West Virginia has since scrapped its use of the technology.

Student may have tried to hack West Virginia’s blockchain election

Even Danny Brown Wolf, who heads strategy at Israeli blockchain company Orbs, whose company is in discussions with Israel’s Ministry of Interior about a blockchain voting platform, doesn’t think the technology is ready yet. Only “lawmakers who don’t listen to experts” would push it, she said.

The problem with blockchain voting

Wolf said there are two main problems yet to be solved with blockchain voting apps: managing identities and preserving the privacy of the vote. Because votes recorded on the blockchain are recorded forever, anyone holding both data sets can cross-reference the data to work out who voted. Even if the data is encrypted, computers will be able to crack the codes in the not-too-distant future.

But one of the main issues, she said, is that these pilots aren’t open source, so “you can’t learn about specific vulnerabilities.” Given the open-source nature of blockchain—and its publically viewable ledgers—”it sort of defeats the purpose and hinders the progress that we could make in the field,” she said.

Even if a blockchain underlying a voting system might work, that doesn’t mean that the app it’s built into, the server it’s hosted on, or the government rolling it out is reliable and secure. Malware, phishing attempts, denial of service attacks are all problems unsolved by blockchain, said Wolf.

Russian cybersecurity firm wants you to vote on its machines

Yap, of Zcoin, agreed that there are issues to be addressed on the implementation of blockchain voting. “It’s the details, right? You can have the most cryptographically secure [blockchain], but is your code secure? Has it gone through rigorous audits?” he said.

What’s important is making those components work together securely, said Yap. “That’s challenging—not so much the blockchain part.”

Original Source: Decrypt Can blockchain voting save elections during the coronavirus lockdown?