Beaxy, a startup crypto exchange once dubbed the ‘Binance killer,’ and the next big cryptocurrency trading platform has failed to take off since launching in June.

Liquidity and management concerns, as well as an infamous hack at the new exchange, are just a few known difficulties that the platform hopes to push back with an influx of new capital and restructuring.

On Wednesday, Beaxy reported in a press release that it has “secured a major new financial partner who has injected significant and welcome capital to operations [at the exchnage].”

The exchange, however, failed to disclose the identity of the new partner, only sharing random information, namely, that the new partner is “a global financial services firm that additionally brings the resources of their thousands of employees, technology, operations expertise, and risk staff to improve Beaxy.”

As part of the supposed new development at the exchange, Beaxy also announced that its CEO Artak Hamazaspyan has resigned with immediate effect to deal with family issues, which allegedly led to his lack of involvement with Beaxy in recent times.

Regarding which persons would now head the company’s operation, the release confirmed the appointment of Nick Murphy and Bay Abbott. The new appointees notably served as Head of Operations and Listings, respectively, before their latest promotion.

Additionally, the new management is expected to get Beaxy off to “a new direction” with significant new resources targeted towards executing development timelines and bringing in a fresh perspective.

Coinfomania has reached out to the exchange regarding their latest partnership and will update this article as soon as we receive a reply.

Evidently, the new developments at Beaxy are responsible for the 25% gain recorded in the last 24-hours by the exchange’s native token, BXY. 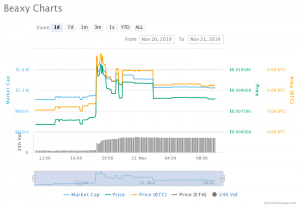 As the above chart from CMC suggests, the value of the token has traded sideways since the June launch, with traders betting indifferently on the success of the exchange. At press time, $BXY was trading at $0.008, down from the 0.010 high that it had attained earlier.