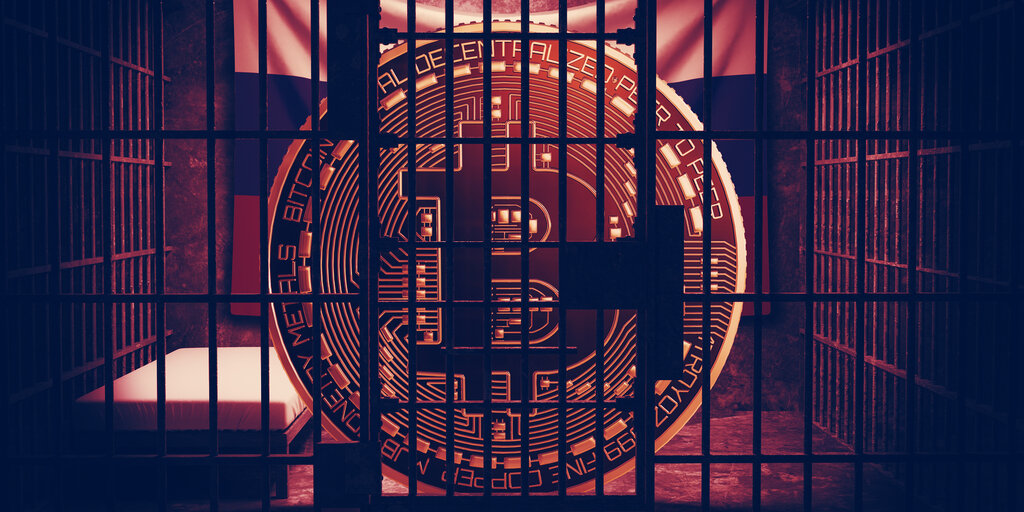 Draft bills that could effectively deem cryptocurrencies illegal in Russia—if they come into force—have been filed by a group of deputies with the country’s parliament, the State Duma. According to a report published by local news outlet RBC on Thursday, leaked documents propose to punish crypto users with hefty fines or even up to seven years of prison time.

According to the report, the draft bills—that first surfaced in Telegram channel “OrderCom” and were later allegedly confirmed to be authentic—were forwarded to Russia’s Ministry of Economic Development earlier this week.

One of the draft bills aims to prohibit the issuance and all operations that involve cryptocurrencies on the territory of Russia while individuals and enterprises won’t be permitted to accept crypto as a form of payment. People that already hold cryptocurrencies would be required to register them with tax authorities and explain how their cryptos were acquired.

Russians turn to cash and Bitcoin as coronavirus sinks economy

Another draft proposes to add new sections to the country’s criminal law for illegal operations with digital assets. For example, if the bill passes, companies that issue or operate digital assets “using sites registered in Russia or technical equipment located in Russia” could potentially be fined for up to two million rubles ($27,800) if they don’t receive approval from a special register at Russia’s central bank. Individuals would be facing fines of up to 500,000 rubles (roughly $7,000).

Additionally, “for violation of the rules for transactions with cryptocurrencies, if they are used as payment for goods or services,” companies would have to pay as much as one million rubles ($13,900), individuals—up to 200,000 rubles ($2,800).

The same charges, but “if major or especially large damage was caused to citizens, organizations or the state, or if these actions led to enrichment on a large or especially large scale,” could result in fines of up to one million rubles ($13,900), imprisonment for up to seven years or community sentence for up to five years.

“Cryptocurrency purchases in Russia for cash or by transfer to accounts opened with Russian banks” are similarly punishable under the proposed laws.

The end of all crypto in Russia—or not?

Dmitry Kirillov, a senior tax lawyer at Bryan Cave Leighton Paisner and a teacher at Moscow Digital School, said that if these proposals are approved and come into force in their current form, it will mean the end of any cryptocurrency circulation in Russia. As property, crypto will lose value because it cannot be sold. “Mining or exchanging 3.5 bitcoins will result in criminal liability,” he added.

Kirillov confirmed that individuals, including private entrepreneurs, and legal entities will not have the right to carry out any operations with digital currency—for example, to accept it as payment for goods or services.

“People who currently own cryptocurrencies will be forced to get rid of them before the law comes into force or risk ‘going underground.’ Goals that will be achieved this way are the direct opposite of what’s being declared. In general, the idea of ​​dropping a crypto ‘Iron Curtain,’ in my opinion, does not contribute to the development of businesses or Russia’s interaction with the world economy on a digital level,” Kirillov explained.

The expert added that he is confident that such laws—at least in their current iteration—will destroy the Russian crypto industry.

Speaking to Decrypt, Sergey Mendeleev, a former deputy of Moscow’s municipal district Yasenevo and the founder of Bitcoin exchange platform Garantex, echoed this sentiment, calling the proposal “a total ban on cryptocurrencies in Russia.”

At the same time, he suggested that chances of these new crypto law proposals actually coming into effect are slim.

“Some signs suggest that the law won’t pass. The bill was developed in 2018 by the Ministry of Finance. If it had been introduced on behalf of the government, it would almost certainly have been adopted. The State Duma adopts almost all government bills. Instead, it was submitted to the State Duma by a group of deputies, which means the law did not go through the approval procedure in the government because there is serious opposition to the bill,” Mendeleev told Decrypt.

He also noted that the proposal was written by just a few obscure authors, while “usually everybody wants to join a surefire project.”

“The bill went through its first reading in the spring of 2018. A year later they tried to resurrect it but to no avail. Nothing has changed since then. The accidental leak of an internal document doesn’t mean anything, in my opinion,” Mendeleev concluded.