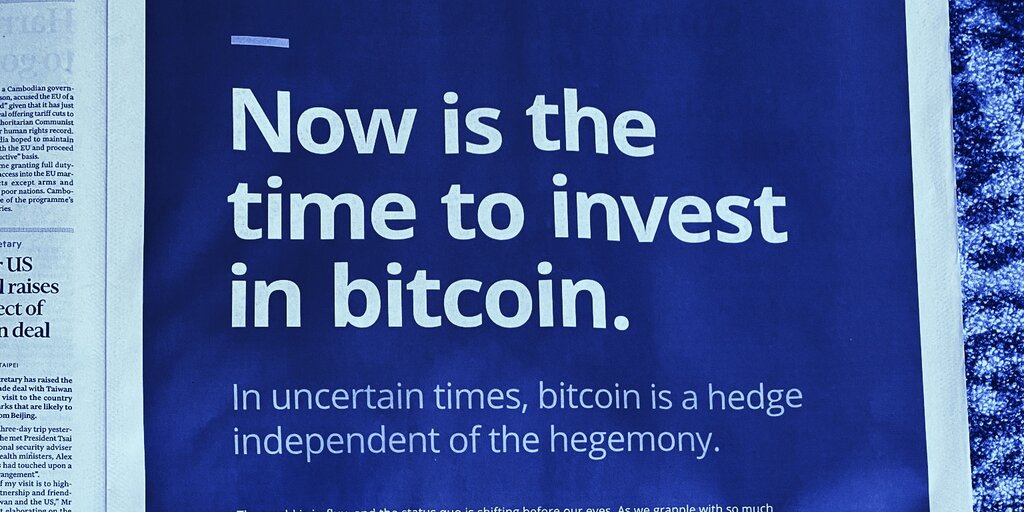 “In uncertain times, Bitcoin is a hedge independent of the hegemony,” the broadsheet ad brazenly reads.

The ad positions Bitcoin’s “hard-coded” fixed supply and consequent scarcity as a hedge against risks, such as inflation, that arise from economic uncertainty.

For crypto Twitter onlookers, the simplicity of the message ticked all the boxes. Even Grayscale’s founder and CEO, Barry Silbert, commended the ad. “Big ad for bitcoin in the FT today from Galaxy Digital. Love it,” he wrote.

Big ad for bitcoin in the FT today from Galaxy Digital. Love it pic.twitter.com/ro05QdvDFf

Grayscale Vs. Galaxy: Who wore it best?

Other than the fact that its message was barely audible over the Ramones yells of “Hey! Ho! Let’s Go,“ the ad only displayed the names of Bitcoin, Ethereum, XRP, and others for a handful of seconds in relation to Grayscale’s own products. It wasn’t audibly mentioned once.

The rest was a barely comprehensible diatribe on fiat throughout the ages, along with some vague references to unlimited money printing. Compared to Galaxy’s fastidious explanation of how Bitcoin can hedge against such macro risks, it’s understandable why, if you compare them, Grayscale’s ad didn’t have the same impression.