BTC vs Gold: Bitcoin Outshines Gold And Other Assets With Its $1000 Single Day Rally

Bitcoin’s April 29th price rally set the momentum for upcoming Bitcoin halving, where the price rose about 14% in 24 hours, taking Bitcoin from $7,800 to $8,841. The $1000 USD price rally also helped the king coin recover completely from the infamous black Thursday market crash, making it the best performing asset of 2020 YTD, leaving behind its arch-rival Gold. Bitcoin broke past the $9k level and was trading at $9,218.07 at press time.

No Looking Back For Bitcoin Since March 12th Crash

Bitcoin has started the year on a bullish note where its price soared past the $10k mark in February itself, building a bullish momentum in the run-up to the halving. However, the month of March saw the worldwide outbreak of COVID-19 pandemic, which crippled the already struggling financial market. The downfall of the traditional market also had an adverse effect on the crypto space as panic set in, and institutional investors rushed to liquidate their position to offer more liquidity in the traditional market.

This chain of events led to panic selling in the crypto market as well, leading to one of the worst crypto market crash on March 12th. The crash wiped 50% of bitcoin value within 24 hours creating a sense of panic and uncertainty. Since then Bitcoin’s price has remained under $8k, only to see a bullish surge yesterday.

The two-month bearish phase saw Bitcoin’s price closely follow the S&P 500 stock and its correlation went to a 9-year high, which hampered its digital gold narrative. However, yesterday’s rally broke that correlation completely and turned it into a negative correlation, where BTC was up by +11% YTD, while the S&P 500 YTD return stood at -11%.

The traditional financial market despite the infusion of billions of dollars do not show signs of improvement, the current BTC rally will definitely attract interest from all kinds of investors. Yesterday’s price rally led to one of the busiest days in Bitcoin Options as well as Bitcoin Futures market, where the futures market crossed $30 billion in daily volume. 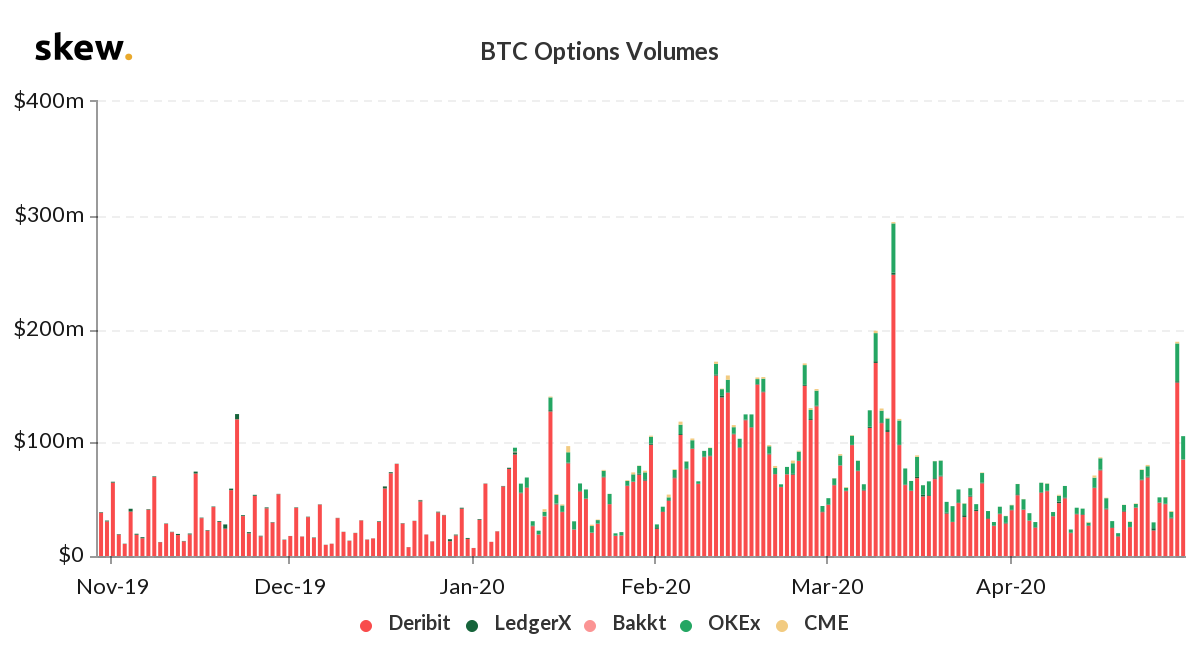 Yesterday’s rally pushed Bitcoin to the top making it the best performing asset of 2020, thus again regaining its status as an asset bound to outshine traditional ones in times of crisis. The current price rally was fueled by various factors including extended bear market since 2017, the upcoming halving and repeating its April 2019 trend when Bitcoin pumped above $13,0000.

PlanB, A popular analyst who gained fame for his stock to flow charts predict that Bitcoin could be trading near $288k by 2024, given the upcoming halving would cut the supply from current 12.5 BTC per block to 6.25 BTC, making it scarcer than gold.

Bitcoin prices tend to break into a bullish run after the completion of Block Reward halving, and the past two halving events have followed the same path, where the price of BTC was hovering around $11 before the first halving in June 2012 and peaked over $1000 in the following year. Similarly, the second halving in 2016 pushed Bitcoin price to its all-time high of near $20k by the end of 2017.