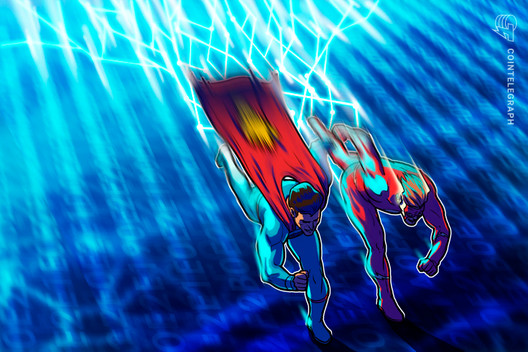 A new fast and scalable blockchain platform is making waves with high-profile partnerships and backing from big investors.

Another day, another mainnet launch. Or at least, that’s sometimes how it can feel in the blockchain space, as every project seems to be scrambling to be the latest and greatest in balancing the trade-offs between speed, scalability and security. Unfortunately, many of them end up languishing with little development activity and precious few users.

Therefore, when a new project comes along that appears to be stirring up genuine excitement among established players and investors in the space, it’s worth taking a second look. Despite being new on the scene and still in the process of developing its testnet, Solana is one such project.

It’s currently associated with names such as Bison Trails and Chainlink, having previously garnered $20 million in investment from high-profile funds such as 500 Startups and Multichain Capital. It also recently sold out of all its tokens in a Dutch auction, even despite the mid-March market carnage. So, what’s going on with Solana to generate such significant interest from the industry?

Back in 2017, CEO Anatoly Yakovenko founded Solana with the ambitious goal of creating a blockchain platform that could scale for global adoption. Yakovenko had previously led the team developing operating systems at telecommunications manufacturer Qualcomm, where as he told Cointelegraph: “I was always a performance geek. I spent 12 years at Qualcomm trying to squeeze out every last bit of performance from hardware.” He also engineered a distributed operating system at Mesosphere and worked on compression at Dropbox.

Upon founding Solana, he onboarded a team of similarly experienced professionals. The company’s chief technology officer and principal architect, Greg Fitzgerald, had also previously worked at Qualcomm across the full spectrum of embedded systems. Its chief operating officer, Raj Gokal, brought experience in product management and finance from his time as a venture investor at General Catalyst and from managing products at his own startup, Sano, and at Omada Health. The chief scientist, Eric Williams, is a particle physicist who studied at Berkeley and gained his Ph.D. while at the European Organization for Nuclear Research, commonly referred to as CERN, hunting for the Higgs boson particle.

The Solana team has been able to attract some impressive investors and partners on its road to mainnet launch. Multichain Capital led a $20 million funding round that concluded in July 2019. More recently, the company ran a Dutch auction through Coinlist for the sale of 8 million Sol tokens, raising a further $1.76 million from 91 companies. In total, Solana has sold 186 million tokens and raised $25.6 million from token sales.

Solana has also attracted several companies to participate in Tour de Sol, its incentivized testnet. The most high-profile of these is Bison Trails, which is also part of the Libra Association. Bison Trails serves as a validator node on the Solana testnet but has also integrated support for Solana to its infrastructure-as-a-service offering.

The issues at hand

Like many other blockchain projects, the Solana team has the scalability challenge in mind while developing the platform. However, Solana aims to achieve scalability without compromising on security or decentralization. Both have been an issue with other blockchains, particularly those using delegated proof-of-stake, which has proven itself prone to manipulation.

Solana also aims to solve another problem inherent in blockchain consensus: agreement on time. In any ledger, the time that the entry is made is critical, as it forms the backbone of the ledger’s chronology. If a ledger is held on a centralized server, the system clock simply timestamps entries as they’re recorded. However, in a decentralized system, all nodes are working to their own clocks. Therefore, time is something that the network nodes must agree on as much as the nature of the transaction itself.

Furthermore, in Bitcoin and other proof-of-work blockchains, the amount of time a miner takes to solve a cryptographic nonce is what governs the difficulty level. So, in the context of a blockchain, recording the passage of time is key. Different blockchains solve this challenge in different ways. However, achieving agreement on time ends up consuming a heavy load in messaging between network nodes.

For example, Hedera Hashgraph, a platform with similar goals to Solana, takes a timestamp from a supermajority of nodes on the network and calculates the median. This has allowed the Hashgraph network to quickly overtake Ethereum in transaction numbers. Christian Hasker, the chief marketing officer of Hedera Hashgraph, told Cointelegraph:

“Since open access of our platform in September 2019 (roughly 6 months), Hedera has seen over 80 million transactions conducted on our network. In comparison, it took Ethereum a little over two and a half years to hit that same milestone.”

To overcome the challenge of recording time, Solana uses a unique protocol called proof-of-history, otherwise known as PoH, that encodes the passage of time into the blockchain data itself without requiring specific inputs or messaging between network nodes. It uses a feature called a verifiable delay function, or VDF, which takes a known amount of time to compute and is limited to operating on a single central processing unit core, meaning processing can’t be expedited by using multiple processors.

The Solana protocol encodes the results of each VDF into the block of its successor. In doing so, it provides an immutable log of the passage of time before consensus even takes place. By removing the load of time-based messaging, Solana claims to achieve transaction speeds of nearly 50,000 per second.

Yakovenko concisely explained the importance of reaching consensus regarding time within a blockchain environment, telling Cointelegraph: “Because we had PoH, we were able to make strong assumptions about time and reduce a lot of the complexity in the implementation.” Regarding the role of VDFs in future blockchain implementations, Yakovenko elaborated on the complexity of implementing them:

“VDFs are still fairly new, and their proposed implementations require a lot of verification hardware like ours, or new ASICS. […] Since our scaling approach depends on modern systems, our VDF works exceptionally well for our network. With our current infrastructure, we’ve been able to leapfrog the current state of the art and deliver throughput of 50,000 transactions per second with 400ms block times on the mainnet today.”

Solana uses a variation on the practical Byzantine fault tolerance model used by Hyperledger Fabric and others called tower Byzantine fault tolerance. This consensus model is designed to incentivize network participants to act in the interests of the network at all times. Nodes stake their tokens on the validity of the most recent proof-of-history hash in a similar way to how they’d stake tokens on block validity in other blockchains.

Similar to pBFT, the more hashes that are confirmed after any given vote, the longer it will take to roll back that vote. Validators cannot vote for a fork once they’ve voted on a particular hash without being penalized. Solana also uses proof-of-stake to determine who participates in the network as a validator. Token holders who don’t have the hardware to join as a validator can delegate a validator to participate in block production.

To summarize, proof-of-history acts as a clock for the network, whereas tBFT incentivizes and penalizes validators to act in the network’s interests. PoS enables token holders to act as delegators, deciding who serves as a validator.

The Solana team didn’t stop at inventing an entirely new consensus method to overcome the scalability challenge, and as Yakovenko told Cointelegraph, proof-of-history, tBFT and PoS are just for consensus. He added: “We had to innovate 8 more times to continue unblocking other scaling problems ranging from parallel transaction processing to real-time block streaming across the globe.”

Eight other innovations supposedly all play a role in speeding up processing time or generally making Solana run more efficiently. For example, Sealevel is a feature that enables the processing of multiple smart contracts in parallel. Turbine works in a way that’s comparable to BitTorrent, breaking data up into smaller packets to enable scalability between nodes, allowing Solana to support thousands of nodes running concurrently.

Recently, Solana teamed up with oracle provider Chainlink to build a superfast oracle that updates every 400 milliseconds. Yakovenko told Cointelegraph that the move was in response to recent market failures due to network congestion. He expanded on the company’s plans to involve more developers and partners over time, telling Cointelegraph:

“We have a great accelerator program that has over 450 applicants already, so developers are going out of their way to find us. They want to build consumer-grade apps but that simply isn’t possible with the infrastructure at their disposal today. Given the pent up demand to build, we’re hopeful that developers will come to check out Solana and that a sizable percentage of those that do will migrate their dapps.”

“In addition to addressing the scalability and security required for applications, dApp developers prize ease-of-use and cost as major drivers of adoption. In addition, dApps want to know that the platform is stable and that it won’t fork so they don’t have to maintain multiple code bases. Finally, they want reassurance that the platform will be around for the long term, and that it’s governed by a trusted council that understands how business runs, and what businesses need.”