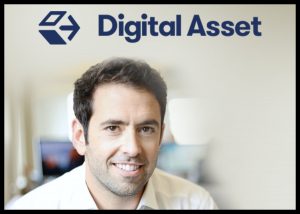 In an interview with Bloomberg, Yuval Rooz, CEO of Digital Asset, a blockchain project backed by Samsung and Salesforce, stated the blockchain community should thank Facebook for its Libra project and discussed how his company is planning to transform the field of blockchain.

Starting off the short interview, Yuval explained the company is planning to use the money raised from Samsung, Goldman Sachs and Salesforce in a recent funding round to “expand their reach to different industries” and development tool kits on their platform.

The blockchain company, which has raised over $150 million USD in funding from previous rounds, has partnered with a number of top firms both in the industry and traditional companies including Hyperledger, Accenture and Microsoft, to offer blockchain solutions to their clients. He said,

“We work together with them [our partners] to bring some of our expertise and their expertise to be able to deliver client’s projects.”

Furthermore, Digital Asset’s CEO believes the future of blockchain is already here given the developments in the space, touching on the recent announcement by Goldridge, who provide a trading platform of U.S Repos using blockchain. He said,

“You are already going to start seeing this year some projects in production.”

On the question of Facebook’s entry into the blockchain space with Libra cryptocurrency, Yuval believes the industry should thank the tech giant for boosting the coverage of the space.

“First of all, this whole industry should thank Facebook for the effort because the skeptics have gotten a wakeup call, and that’s a good thing.”

He further said the industry is growing to shape the future of technology and will likely shape the next generation too. The impact of Libra launching has been felt far and wide as Europe, China, U.S, Nigeria, Australia and Singapore all having shown concern on regulation of the industry due to Facebook.

“I think the industry should thank Facebook,” Rooz added.