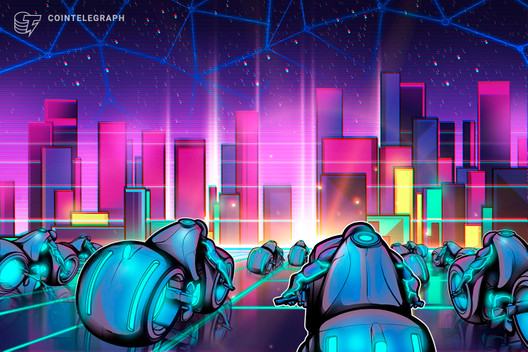 The much-delayed blockchain role-playing game Neon District will be launching on Ethereum layer-two scaling solution Matic, according to a recent announcement.

Neon District developer, Blockade Games will also move several of its community games onto the network.

Could we finally be entering the Neon District?

Neon District has been coming “soon” since October 2019, when its imminent launch was delayed by six months.

Set in a dystopian future, the game centres around rebels fighting an authoritarian government. Players level up their characters by completing missions, and acquire equipment in the form of non-fungible tokens.

These NFTs will be freely tradable in an online marketplace powered by the Matic network.

Some eager gamers even bought in-app units and inventory items at a loadout last October, just before the game was delayed. While they have had little option but to hold onto these NFTs since then, Cointelegraph has been told that the assets will be freely tradable within the next two months.

Neon District was previously slated for release on the Loom network, before the Loom project announced it had “pivoted from blockchain games to enterprise” and went AWOL.

Matic Network is a similarly layer-two scaling solution for the Ethereum blockchain. Backed by major cryptocurrency exchanges Binance and Coinbase, it has been gaining traction in the space, attracting over 50 decentralized apps to its PoS+Plasma sidechain.

Second-layer solutions can offer enhanced performance, while vastly reducing the gas fees for Ethereum transactions. Matic claims that its infrastructure can support 10,000–15,000 transactions per second, and one to two second block times.

Unfortunately, the move to the Matic network will not speed up the arrival of the game itself. While Neon District is planning to “release multiple experiences in Q3 and Q4 2020,” the official Season One will not be available until 2021.