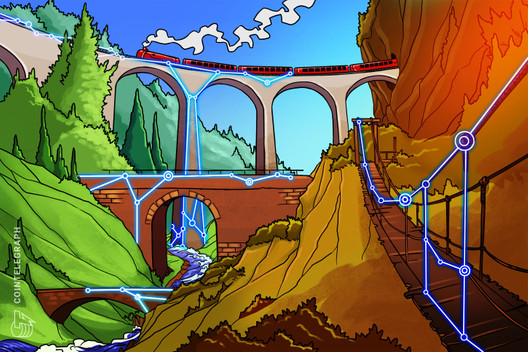 As a new concept within the industry, blockchain bridges possess a lot of promise for the blockchain and crypto landscape and for the future of the industry.

Are there blockchain bridges in operation for any dApps now?

The bridges currently in operation have only been operating in their current form for a few months, so they are still in their early days in terms of adoption. However, bridges hold a lot of promise, particularly for stablecoins. Tether (USDT) has had to continuously expand to new networks in an attempt to keep up with its growth. The company’s chief technology officer, Paolo Ardoino, has indicated an interest in the use of bridges to help this scaling effort. Syscoin is also in talks with stablecoin projects that are interested in using its bridge.

Given the relative immaturity of this nascent field, it’s inevitable that some bridge implementations are also experiencing issues. In May, a trust-minimized Bitcoin–Ethereum bridge called tBTC had to be shut down two days after launching because developers found a bug in the code that made it impossible to continue operating.

Nevertheless, it seems inevitable that with the current focus on scalability and interoperability, bridges will form an integral part of the blockchain landscape of the future.

Jagdeep “Jag” Sidhu is the lead core developer and co-founder of the Syscoin platform and Blockchain Foundry. As an expert in blockchain technology, Jag also specializes in machine learning, artificial intelligence, client/server development and distributed systems, with nearly 20 years of software development experience. Jag holds a Bachelor of Technology in computer science from the British Columbia Institute of Technology with a major in AI and digital image processing and a minor in client/server computing.​​​​​​​

How do blockchain bridges work?

Much like blockchains themselves, bridges can be operated on a spectrum of decentralization. The bridges outlined above fall into two categories: federated and trustless.

A federated bridge is run in a similar way to a private or permissioned blockchain. The project establishes a set of criteria for which someone can qualify to become part of the federation that manages and oversees bridge transactions. For example, in Wanchain, specialized nodes called “storemen” lock tokens on the Ethereum blockchain using secure multiparty computation. The equivalent value of tokens is minted on Wanchain, and when the user wants to move the assets back onto Ethereum, a threshold of storemen must provide their fragment of the secret key.

A trustless bridge can operate through a decentralized network of agents. Unlike the federated model, anyone can join the network as an agent, and agents are incentivized to ensure that bridge transactions are validated correctly. For example, the Syscoin bridge uses a network of agents that stake Ether and earn fees from bridge transactions, which are grouped into superblocks. If any agent believes that another isn’t acting in the interests of the network by submitting invalid superblocks, they can raise a challenge. If the challenge is upheld, the challenger wins 3 ETH from the submitter. Conversely, the challenger loses 3 ETH if their challenge is deemed unfounded.

Are there any examples of blockchain bridges?

Several projects have now released their own versions of a blockchain bridge.

Wanchain was one of the earlier projects to enter the interoperability space. In January, it launched the fourth version of its mainnet, introducing the T-Bridge framework, which enables the transfer of data and digital assets between blockchains.

What are the benefits of blockchain bridges?

There are many benefits to using blockchain bridges. For example, a DApp developer using Ethereum frequently suffers issues with poor user experience due to slow transaction processing speed and expensive gas fees during times of high traffic and congestion. By using a bridge, they can send their token onto another blockchain for processing at a higher speed and a lower cost. This means that the developer can continue to run their DApp on Ethereum, using ERC-20 token standards and tapping into Ethereum’s vibrant developer and user community.

Both blockchain ecosystems also benefit from developers using the bridge. It reduces network traffic on Ethereum by dispersing it over other, less congested blockchains, thus going some way to solving Ethereum’s ongoing scalability challenges. The other blockchain gains exposure to — and adoption by — the Ethereum community.

Use cases for a bridge could include instant payments at point of sale, which has so far been virtually impossible given the scalability challenges of Bitcoin (BTC) and Ether (ETH). Bridges could also prove useful for DApps needing instant settlement for a seamless user experience, such as casino games.

What are blockchain bridges?

A blockchain bridge provides a connection that allows for the transfer of tokens or data between two different blockchain ecosystems.

A significant challenge of blockchains to date is their lack of interoperability. Once a developer builds their decentralized application on any particular platform, they’re generally locked into that platform with no opportunity to leverage any of the benefits of other blockchains.

For example, Ethereum has well-documented scalability issues that many developers probably hoped would be solved by now. If they move to another, faster platform, such as EOS, then they lose out on the benefits that Ethereum does offer: a large community, a widely supported token standard and the most-adopted smart contract platform.

Therefore, a developer can use a bridge to send their token from one blockchain platform to another, leveraging the benefits of both. In a truly interoperable blockchain ecosystem, tokens, data and smart contracts could potentially travel between many different platforms.