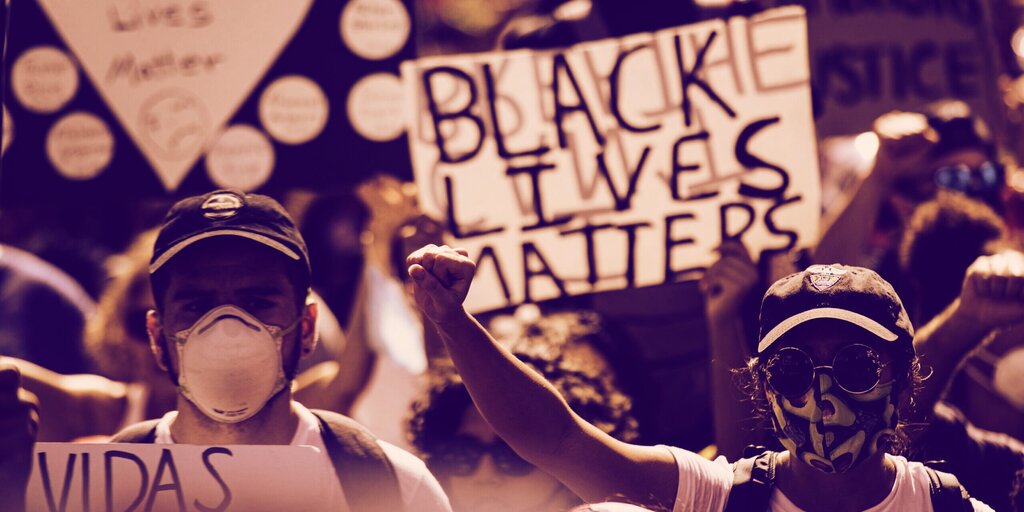 The encrypted messaging app already has half a billion users worldwide. Its privacy features allow users to hide their phone number and communicate more privately, as authorities tighten up surveillance on US citizens.

Black Lives Matter announced news of its switch to Telegram on Thursday. Its channel, The BLM Revolution of 2020, put out a list of channels and chats focussed on the current uprisings.

It stated its intent to, “… build the decentralized widespread use of organizing on telegram, considering its value for on-the-ground realtime coordination and comms for keeping people safe from police riots and attacks.”

Telegram: A tool for decentralized protests

It’s not the first time Telegram has been linked with mass protests. Last year, Decrypt reported on Hong Kong’s Telegram’s groups—made up of hundreds of thousands of protestors—and how their autonomous, leaderless character was enabling protest leaders to evade arrest, through the world’s most decentralized protests to date.

“Black Lives Matter movement has switched to Telegram. This was the app used very effectively in the Hong Kong protests. Will be interesting to see if this trend jumps the Atlantic,” tweeted Mike Butcher, TechCrunch editor-at-large, on the news.

#BlackLivesMatter movement has switched to Telegram. This was the app used very effectively in the Hong Kong protests. Will be interesting to see if this trend jumps the Atlantic.https://t.co/yFScwfaVXW

The app has also been integral to uprisings in Iran and Russia, where the authorities have failed in their attempts to block it. Instead, it’s become an indispensable weapon for protestors, and a foil for government attempts to ban demonstrations, interfere with free speech, and monitor communications.

Telegram fever: the crypto messenger shaking up the world

Organizers have described how Telegram had been integral to their struggle, enabling them to safely disseminate video footage and updates, details on how and where to rally, and requests for supplies.

Telegram’s 500 million users is a far cry from WhatsApp’s five billion or Google Messages’ one billion but, as the protests show no signs of abating, its privacy features could increasingly come to be a hot commodity.

Fighting against a surveillance state

Since the US protests began at the end of May, they’ve extended to all 50 states and to other parts of the world. Many states have imposed curfews, to stem violence, and US President Donald Trump has called for the National Guard, and even the military, to respond.

On June 3, the government ramped up its surveillance of protestors. With new approval from the Justice Department, the Drug Enforcement Administration is now licensed to “conduct covert surveillance” of protestors and “share intelligence” with other law enforcement agencies, for a period of two weeks.

Trump has also made clear that he intends to designate the decentralized, anti-fascist protest movement Antifa as a terrorist group, whose adherents would be “hunt[ed] down.”

In response, @WeAreAllAntifa, tweeted on Thursday: “Tell everyone you know to download Signal and Telegram! These are essential tools for fluid and safe coordination on the ground right now.”

Tell everyone you know to download Signal and Telegram! These are essential tools for fluid and safe coordination on the ground right now.

Demand for rival privacy app Signal, which offers end-to-end encryption by default, has also increased during the protests, according to data analytics firm App Annie. On Wednesday, Twitter CEO Jack Dorsey told his 4.6 million followers to download Signal. But it’s now slipped out of the top 10 messaging apps for iOS on App Annie, while Telegram currently holds steady at number seven.

Fifty years on after Gil Scott-Heron wrote “The Revolution Will Not Be Televised,” his mantra remains as relevant as ever. But now, the revolution will be Telegrammed.