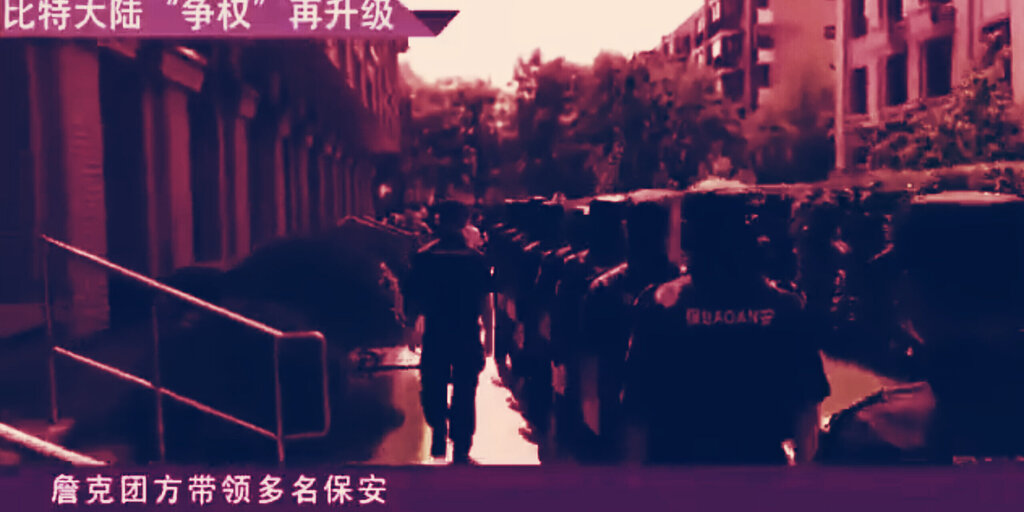 Bitcoin mining company Bitmain’s co-founder and CTO Micree Zhan, who was kicked out of the company last year, hired a dozen security guards to take back control of Bitmain’s China office, according to local reports.

OH MAN the #BitMainDrama this video is verified by @BlockBeatsChina

Micree today led a team of private guards crashed Bitmain Beijing office … they broke in by brute force and tried to take back the control (after Jihan’s initial coup and series of outrageous behavior) pic.twitter.com/wkpKJ8Nr8H

According to news outlet BlockBeats, Zhan sent out a letter to Bitmain shareholders and employees today, stating that he had taken control over Bitmain’s office in China and that he was encouraging employees to return to work. He apologized for the recent issues at the company and said he would progress Bitmain towards an IPO with the hope of making the company worth $50 billion within five years.

We have reached out to Bitmain and will update this article if we hear back.

The troubles at Bitmain began in October 2019, when Bitmain CEO Jihan Wu ousted Zhan from the company. “Any Bitmain staff shall no longer take any direction from Zhan, or participate in any meeting organized by Zhan. Bitmain may, based on the situation, consider terminating employment contracts of those who violate this note,” he said, at the time, according to Coindesk.

The internal dispute stems from a difference of opinion between Zhan and Bitmain’s other founder, Jihan Wu, over the future direction of the company. Zhan believes that the company should pursue a strategy of also offering silicon specialized towards AI, while Wu prefers to stay the course and focus only on mining.

After Bitmain’s failed IPO, Wu initially left the company but returned to “right the ship” with support from shareholders, saying he would take legal action to regain control over the company. “Bitmain is our child. I will fight for her till the end with legal weapons. I won’t allow those who want to plot against Bitmain to succeed. If someone wants a war, we will give them one,” he said at the time.

Local authorities agreed to hand control of the company to Zhan, according to a statement from Bitmain on April 29. But when he turned up on May 8 at the Haidian District Administrative Service Center to collect his documents, dozens of other people showed up, including Bitmain’s Chief Executive Liu Luyao, and there was a physical fight, as reported by Caixin.

But while there may be fights over the office, at least Bitmain is willing to admit it has one.