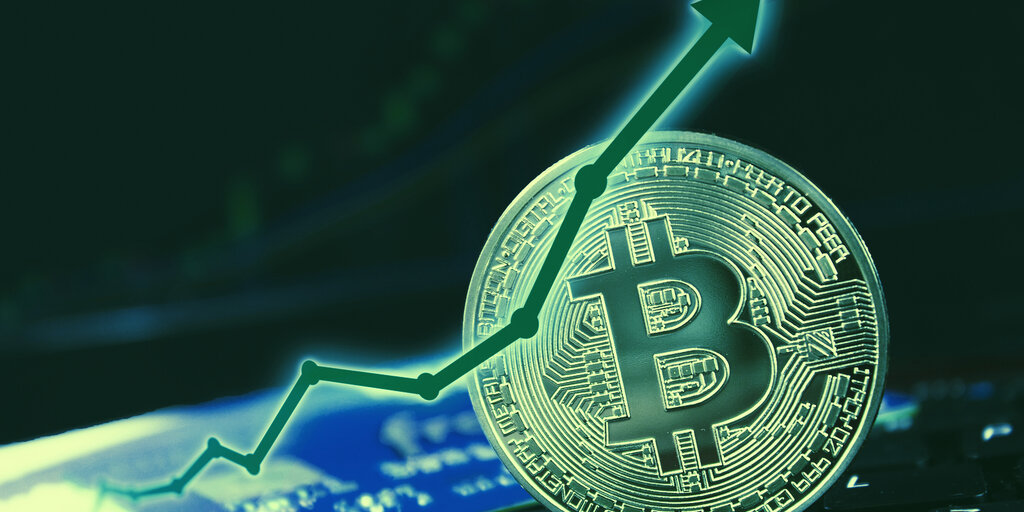 This weekend, Bitcoin shot up above $10,000 for the first time in seven weeks, breaking a psychological threshold and sending the cryptocurrency’s price back to pre-coronavirus levels.

Unlike on previous occasions, though, the biggest cryptocurrency by market cap may not be leading the market, but following in others’ wake. That’s the verdict of some experts who spoke to Decrypt, who also claimed that Bitcoin’s surge wasn’t unexpected.

“A lot of analysts have predicted a breakout for some time based on the technicals and, with constantly improving fundamentals and the effects of fiat devaluation, this was not unexpected,” Jason Deane, an analyst at Quantum Economics, told Decrypt.

“There’s a lot of talk of BTC moving back into exchanges to trade for altcoins, especially linked to DeFi, which would explain Ethereum (and others’) movements,” Deane added. That wouldn’t explain Bitcoin’s move, he noted, “except under the ‘rising tide raises all ships’ scenario and if a certain percentage are buying BTC to gain interest returns.”

Simon Peters, cryptoasset analyst at social investment platform eToro, noted that Bitcoin is flowing into exchanges for the first time in several months, echoing findings from a recent Glassnode report. “In my view, this is merely investors looking to take advantage of altcoin prices, which are now gaining momentum compared with Bitcoin,” Peters said.

Although for the most part, traders can only speculate why Bitcoin’s price has increased, the ever-increasing popularity of decentralized finance (DeFi) platforms based on Ethereum could be one reason behind the broader crypto market’s growth.

Ethereum itself hit its highest price since June 2019 on Sunday, while Bitcoin is losing dominance to altcoins. Currently, Bitcoin’s dominance over the cryptocurrency market is only 61.6%—the lowest it’s been since last July, while a recent Glassnode report indicated that more Bitcoin entered exchanges this month than left it, for the first time since January.

That, as market analysts suggested to Decrypt, could indicate that Bitcoin is flowing into exchanges to be traded for the altcoins that power DeFi platforms.

Another possible reason for the recent surge could be the continuous increase in stablecoins’ market capitalization, said Peters. “Tether (USDT) crossed the $10 billion mark this month and USD Coin (USDC), Circle’s stablecoin, is also at its highest level, having reached a market cap of over $1 billion,” Peters noted. “Perhaps some of this liquidity has made its way into Bitcoin.”

“I would imagine the ‘Depth of Market’ on exchange order books has been pretty low, given that over the last five months, more Bitcoin has been taken off exchanges than put on,” he added, pointing out that a big enough market order could have shifted the price significantly over the weekend.

“Bitcoin’s network metrics are also looking pretty healthy, indicating that confidence is high and price is low,” Peters added. “This could be the catalyst for bulls who were ‘sitting on their hands’ to now go out and buy.”

Deane noted that CME Bitcoin futures open interest—as well as global—has risen sharply recently, which could be suggesting positive institutional activity. The overall devaluation of the US dollar, possibly catalyzed by countries around the world that are massively expanding their debts to fight the coronavirus, could be another factor.

“USD devaluation, increasing awareness of Bitcoin and ease of use and access […] makes Bitcoin a likely candidate for a safe haven/store of value going forward in my view,” he said, while stressing that, “We never know for sure, of course!”

Deane also pointed out that this will be the first post-Bitcoin halving surge in demand, with 50% less Bitcoin being mined on a daily basis.

What will happen to Bitcoin’s price now?

The price surge drew Bitcoin evangelists and skeptics to Twitter like moths to a flame. Euro Pacific Capital CEO and noted Bitcoin skeptic Peter Schiff pointed out that Bitcoin hasn’t held a price above $10,000 in the last couple of years.

Ok, guys. I'm gonna go out on a limb and make a small prediction here:

We will never see Bitcoin below $10k again.

While Hodlonaut has been repeating this prediction regularly since at least July 2019, who knows—one day it’s got to stick, right?