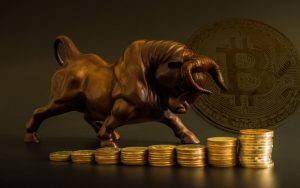 Crypto analyst Gabor Gurbacs, director at VanEck compares Bitcoin (BTC) to gold stating the top crypto could be headed to a trillion-dollar market capitalization in the near future even without reaching the “mass adoption” numbers publicized over the past few years.

In the past few weeks, the price of Bitcoin has been on a steady rise to $9,700 since hitting its year-to-date low of $3,800 earlier on March 12 leading to increased focus and media attention on BTC as it targets $10,000.

Over the weekend, the cryptocurrency Twitter community was set ablaze by Harry Potter’s legendary author, JK Rowling and Tesla’s and Space X founder and CEO, Elon Musk, exchange on Bitcoin. After a number of back and forth angling tweets from the author and the community, it is becoming clear that one of the major challenges that the currency faces in adoption is – education of the non-believers.

Despite the digital coin’s deficiencies in widespread education, a crucial component in boosting participation in the currency, Gabor Gurbacs, CEO, digital asset strategist/director at VanEck and cryptocurrency analyst believes BTC is not meant for everyone.

#Bitcoin isn’t for everyone and that’s okay. Only roughly 1% of portfolios hold #gold and gold market cap is in the $8 trillion range! It’s not absurd to believe that Bitcoin will go to the trillions range even with moderate adoption.

‘Bitcoin Will go to The Trillions Range’

On the possible future of Bitcoin, Gabor believes the top crypto is headed in the right direction as he compared to it to gold’s current low preference across portfolios. According to BMG Group reports, in 2016, only 0.51% of gold was held as a percentage of the overall financial assets with equity and debt flooding the financial markets.

“Only roughly 1% of portfolios hold #gold and gold market cap is in the $8 trillion range!”

Given the current massive growth in Bitcoin’s price over the past decade in existence – with only about 640 million total addresses ever created – BTC offers huge promise even if the adoption remains moderate in the coming years. Gabor said.

“It’s not absurd to believe that Bitcoin will go to the trillions range even with moderate adoption.”