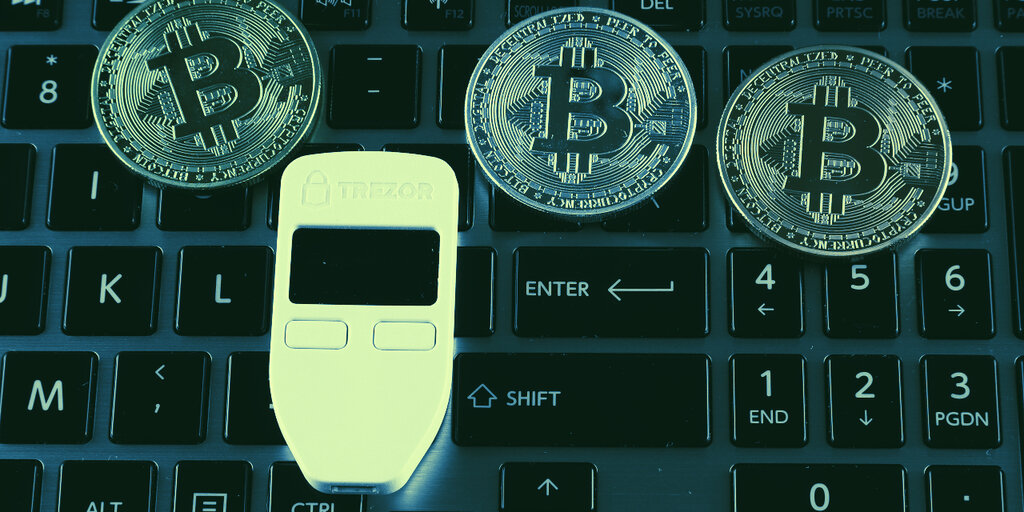 Czech-based Bitcoin hardware wallet Trezor released a firmware update two days ago. The patch was in response to a potential exploit for wallets that use the Segwit protocol—a transaction fix that enables cheaper and less data-heavy Bitcoin transactions.

But even though Trezor patched their wallet, it’s still causing problems for Trezor users who rely on the wallet to interact with other Bitcoin-related software, like the privacy-focused Wasabi wallet and Bitcoin tech-stack BTCPay.

Given the way the vulnerability has been patched, Trezor users who make the update and use Trezor with Wasabi and/or BTCPay will be locked out of their funds. Wasabi and BTCPay are urging users to not update until the compatibility issues between the firmware update and their software are resolved.

Prolific independent hacker Saleem Rashid discovered the exploit (his latest of many Bitcoin hardware/software bug finds) some three months ago and disclosed it to major hardware wallet manufacturers including Trezor and Ledger. With a firmware update available for download, Trezor rectified the vulnerability on its end.

But this vulnerability, which developers told Decrypt would be difficult to exploit, has Trezor in the spotlight because of its popularity with third-party wallet integrations (e.g., the hardware wallet can connect to popular privacy wallet Wasabi and Bitcoin payment portal BTCPay Server).

The actual bug, which is more-or-less severe than others in the past depending on the hardware wallet and software wallet developers, opens the following attack vectors according to Trezor:

ColdCard hardware wallet manufacturer NVK, who was not informed of the vulnerability, mentioned that the “severity is low” for the attack, adding that updating hardware wallets may “break hardware wallet interaction” with other wallet software.

This attack would require malware on the computer or some other means to change the transaction before signing. And also requires the attacker to be a miner to get the payout. Severity is low, updates would break HWI interop and maybe break Core too.

Potential hyperbole aside, Trezor said that it’s keeping the fix simple. Trezor CEO Pavol Rusnak explained in a statement: “The fix is straightforward—we need to deal with Segwit transactions in the very same manner as we do with non-Segwit transactions,” which involves the wallet checking and re-validating all of its previous transactions before sending new ones.

Still, if the fix is an easy one for Trezor to make, that doesn’t mean it solves the problem completely for Trezor users who rely on the wallet to interact with other software.

The fix, for instance (having Segwit wallets check and re-validate old transactions), doesn’t work with some “third-party tools.”

“Trezor will not be able to sign transactions using these tools until they are updated to work correctly. Due to the responsible disclosure process, we were not able to inform the maintainers beforehand,” the company’s post stated.

One of these affected parties is the privacy-focused Wasabi wallet, which integrated with Trezor last year. It’s founder Adam Fiscor, for instance, announced on Twitter that Wasabi users should not update their firmware until “compatibility issues” are sorted out.

If you are using Trezor with Wasabi please don't upgrade your firmware until compatibility issues are resolved, otherwise your funds will get stuck until support of new firmware comes out. https://t.co/zrA5ml2kBL

Fiscor told Decrypt over email that, in his opinion, “the consequences of the firmware update that Trezor users are locked out of [Wasab] wallet is more problematic than the attack itself,” and while he agrees “with NVK’s assessment,” he doesn’t blame Trezor “for being overly cautious.”

Nicolas Dorier, founder and head of the open-source BTCPay Server, told Decrypt that he wished Trezor offered “a transition period of 1-2 months so users have time to migrate their funds.”

BTCPay Server is a decentralized Bitcoin payment processor that includes added features like the Lightning network and, as of last year, hardware wallet integration with Trezor.

Dorier said that his service would likely need to drop support for Trezor and hardware wallets that require the transaction checking scheme because BTCPay Server users do not store all the blockchain’s data; they run so-called “pruned” nodes which only store as much data as is needed to use the BTCPay’s services with the Bitcoin network (this makes it quicker and easier to download and run BTCPay).

1/ If you use Trezor and updated the firmware, you won't be able to get the money out of your Trezor via BTCPay Server anymore. We can't fix the issue as we don't have the data Trezor will request. (no transaction index)https://t.co/FIJOTiIHuD

So like Wasabi, BTCPay is urging its users to not update, lest their funds get locked into the service. As long as users are running an older version of Trezor, they should have no problems removing them. They could also restore their wallets from their seed phrase (the backup phrase that acts like a master key to a wallet in the event it is corrupted or lost) either on another, un-patched hardware wallet or as a new wallet on their BTCPay instance.

For now, Trezor users on Wasabi and BTCPay are advised to sit tight and move their funds before they update.