Bitcoin Safe-Haven Test: Stocks take a Dive As the US Struggles to Contain Coronavirus 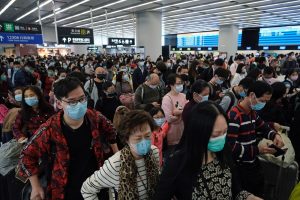 The situation in the US (especially Washington and California) is getting worse as COVID-19 death toll increases to 12 in the country. The CDC in the US reports 129 confirmed cases, with other reports suggesting that the number might be greater an 225.

Moreover, as recently reported on CoinGape, according to mortality rate of 1-2%, the actual number of cases could be much higher than reported. The spread increases as the number of people affected continues to rise.

Samson Mow, the CSO of Blockstream tweeted on the anonymous letter from the nurse who is reportedly affected by virus and is not getting sufficient care, he tweeted,

Things aren’t looking good for Americans if this is how they’re handling #COVID19. Say what you will about China but they controlled the outbreak and things are starting to return to normal.

The Government has designated a budget of $8.3 billion to fight the contain the virus in the country.

Despite the US Feds dropping the rate below 50 bps points, the QE (Quantitiave Easing) step has failed to save the market from a drop.

Peter Schiff, a gold buff and a Bitcoin critic noted,

I just noticed that “Not QE” added $82.9 billion to the Fed’s balance sheet last week. That’s an entire month’s worth of QE3 in one week

The S&P 500 Index today tests lows at $3000, with gold continuing its uptrend past $1675. Leading trader, Jacob Canfield tweeted on the price action in traditional markets,

After the fed cut the rates, the reality is setting in across the markets with fears of the #CoronaVirus.

An inflation due to shortage and hoarding in the retail markets could drive up the cost of commodities and services tremendously.

The price of Bitcoin is in an uptrend again as it’s non-correlation with traditional markets continue to uphold. Recently, its was questioned on its’ ability to act as a safe haven asset.

Mike Novogratz, a billionaire VC investor, however suggested that as things deteriorate past certain levels, flash drops are usually a ‘tell’ for worse times ahead.

Furthermore, as China’s situation is turning back normal, the total hash rate is on the rise again as well, reaching to all time highs. This could be a bullish signal for Bitcoin as well, as miners will be looking to accumulate stacks before halving.

Do you think Bitcoin’s bullish trend will continue or innovations will come to a standstill? Please share your views with us.